I own a subaru impreza 2008/2009 model, with keyless Entry (european edition, made in Japan), does anyone have any experience with wiring alternate unlocking solutions for cars with keyless functionality? Like is there any possibilities of “skipping over” the keyless module to use an arduino to open it instead? (Obviously to implement the possibility of opening the car with my hand)

Found a wiring diagram of a subaru with a oem keyless Entry system that seems to match mine quite nicely, if that is Any help

chimpo on the discord has JUST the thing for you lmao

and what is that?

its called “the simple sexy” forgive the name but its an RFID ignition system made by one of the DT community members called chimpo, hes over on the discord if you wanna know more about it

Check out the Dangerous Discord community on Discord - hang out with 270 other members and enjoy free voice and text chat.

His system only replaces the ignition barrel of a car, which my car dosent have, as its a push to start ignition system, with a wireless keyfob

anyone tried it on a similar system?

The easiest way to do this is to get a spare fob from your dealer and hack the fob. Basically disconnect the battery from the fob and when you scan, connect it, then on next scan disconnect it and toggle back and fourth.

That was my idea also, seems like a decent plan thanks!

You just made me REALLY excited! Thanks

The fob is powered by the car, but powered down most of the time… The xAC (edit: using the V1 controller, not the new one) takes up a decent amount of current (13-26mA IIRC). The controller I made goes to sleep and draws 8mA.

If you don’t power the the fob off, the car thinks you left the fob in the car and will not lock.

Close enough
11mA idle 48mA when reading.
This is quoted, I have never actually measured it

I wonder if I used an extra car battery how long that would last?

It’s hard to measure because it’s constantly changing due to the pulsing antenna. I measured it with a very fast 7 digit bench meter, but it being fast doesn’t help my eyeballs read it lol. I don’t have a current probe for my scope. It seemed to swing between the numbers I quoted, while at idle. I did not measure it while actually reading which I assume would be higher, but I was only interested in idle draw.

I typical PbA automotive battery has a capacity of say 70Ah… Give the average draw of the reader and the controller to be 30mA, you get 70/0.030 = 2333 hours, or 97 days. Now the battery will cease to be able to crank your engine far before that.

Do you go weeks without driving your car that you are worried about this? If you drive more than once every week or 2 it will be fine.

Do you go weeks without driving your car that you are worried about this?

No I drive it nearly every day, I meant more as if I just had an extra battery in say my trunk how long it would last. Which judging by the ways people use them for massive speaker setups I’m sure there’s a way to have it connect to the alternator as well?

I’m sure there’s a way to have it connect to the alternator as well?

There is also the “old school” traditional battery isolator. 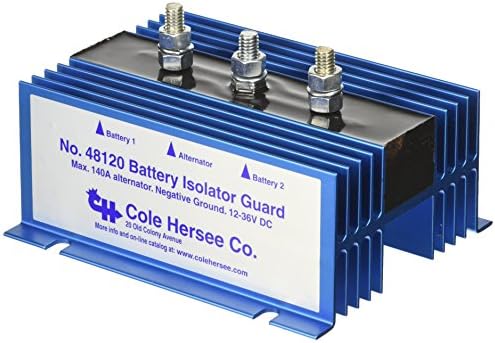