Hey, what did he say by the way? 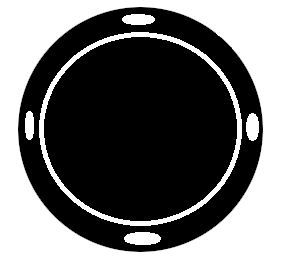 I think this would be easy and result in the least increase in size, but yeah would require sutures to hold in place.

Idk what body modders are capable of doing but adding sutures inside the your hand feels like it’s approaching doctor or surgeon level especially if you consider that I’ve seen a lot that can’t even do basic stitches properly on a consistent basis idk if I’d trust them to do this unless I know for sure they’re really good. I’d rather it just rotates then potentially complicate healing or cause other issues

it always boils down to that in bodymodding… I would’t let someone with a needle, a scalpel or a cauter near my body if I wouldn’t trust him and if I wouldn’t know that he knows very well what he is doing. And you can completely transfer that to “real” doctors and surgeons as well, I guess.
Thing is, good bodymod-artists usually have a portfolio you can look at; doctors usually don’t

Honestly, I would be ok with that, the smaller the better.

@Doubt6
That’s true, but I am still considering incorporating LEDs into some tattoo, so as I would need to do tattoo 1st, I can’t have any rotation… I had been thinking about this for so long now… Maybe I should give up honestly.

@Coma
I went there and learned they weren’t comfortable with doing sth like this. I was with a friend who was asking about his 1st tattoo, so at least I didn’t completely waste my time

and we went shopping, got sick shirt haha

I went there and learned they weren’t comfortable with doing sth like this.

Ah damn, feel sorry for you! Hope you’ll find someone whom you trust and who’s able to do that…
(by the way, to quote, just mark the text you want to quote, a little button will pop up^^)

I am still considering incorporating LEDs into some tattoo

That’s a nice idea (I plan putting some in a scarification^^) - and yes, I think the tat should be there first… no room for rotation, that’s true. But maybe the smaller one-blinky-thingies that Amal showed in his last Lab-Thread might be something for that as well? They are smaller and more rectangular, so they should stay in place I guess…

overall I also feel the idea of sutures to secure the device from spinning is only adding another level of difficulty for the installer. i think the best approach at this point is to start exploring @Moonman0922’s shape concepts. I think the upper right corner is probably the best approach… the pentagon shape.

It would add the least amount of surface area.

Theoretically, if some installer could do the sutures like that, would making small puncture for it at the perimeter be dangerous?

by the way, to quote, just mark the text you want to quote, a little button will pop up^^

But maybe the smaller one-blinky-thingies that Amal showed in his last Lab-Thread might be something for that as well? They are smaller and more rectangular, so they should stay in place I guess…

Yeah, they are nice for sth like that, but I wanted them to light up when they actually do sth and my tattoo idea had perfectly 3 spots in a triangle… perfect for the flexnext.

I wouldn’t trust him and if I wouldn’t know that he knows very well what he is doing. And you can completely transfer that to “real” doctors and surgeons as well

Yeah you can but the difference is doctors go through years or learning and practice before they can start cutting people open while body modders tend to learn by practicing on people and sure they have portfolios but they’re only gonna show their best, not the botched stuff.

sure they have portfolios but they’re only gonna show their best, not the botched stuff.

Mh, considering how difficult it is by now to just do bodmods at all, most of them who “botch” stuff are no longer there or have quite the reputation…
And of course, portfolios show things they are kinda proud of - but if you deal with that stuff for quite a long time, you can see if they are really good at what they do or if they are still “new” to the field. The amount of different works is important as well, to see if someone does one or two mods a year or rather dozens. So if you know what to look for, you can to a certain amount “read” such portfolios.

Yes, this, always and foremost! But I’d say regardless of personal sympathy and a “gut feeling”, take a close look at his / her work

That being said, no matter how great an artists work is, I could never work with someone whom I dislike personally… so I guess it might be equally important

What about a little room with blur

HAHA, I’ve never heard that analogy before, but I like it, I would change it to “forcing a fat man through…”

I’d post a pic if what I mean but I’m still figuring out the forums and I’m on my phone.

Try out the tutorials

would making small puncture for it at the perimeter be dangerous?

I would say it’s not the best idea to put extra holes into the material… but if you were going to try to do that, i’d put it at one of the points of the pentagon shape, furthest away from the edge of the device inside. That said, there are also other factors… sometimes there are imperfections in the polymer that are fully encapsulated and pose no issue, but that’s only because the cut edge of the implant is fully encapsulating them. You can’t see these imperfections with the naked eye though, and it might be possible that you run the needle through one of these and that creates a nice little channel into the inner device (it will eventually fail) or at the very least set up a nice hiding spot for bacteria to take up residency.

So if you know what to look for, you can to a certain amount “read” such portfolios

Because of this I feel like the implants should be as simple and easy to install as possible so it doesn’t put off people from getting them or even stop them because of certain laws in countries.

Try out the tutorials

I am totally on your side there…
Still, its surgery to a certain degree, so it’s not a bad idea to get into the field of bodymods at least a little

- even with the way the flexNExT-implants currently are, it’s quite risky to have them installed by someone who is “not so good” in his job, or, in worst case, not well informed about cross-contamination and such.

See, i’ve got absolutely no idea about all the tech stuff in this forum, I’m happy I’m quite good in at least one of those three points

Just a thought, but why not make it a square? Round the corners off and it couldn’t turn

It would make it bigger and harder to stick to the hand shape making it far more visible I suppose.
It wouldn’t be much of an issue on the arm though.

another option like what Rosco mentioned is we offer a little loop for sutures;
[…]
The problem with both of these approaches is that the LEDs will likely be situated in a certain way in the implant, but the customer may want them positioned under the skin such that the oval shape or suture loop would need to be located in a less than ideal position.

That’s why I suggested several holes, so the customer can choose the orientation: 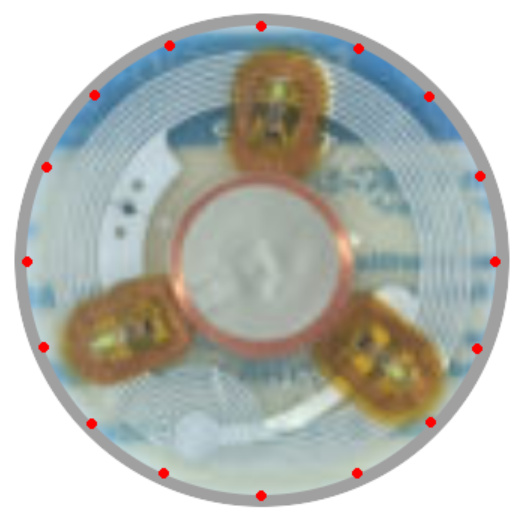 Also, not in the form of 'handles", but integral to the rim - which would have to be slightly enlarged I suppose, to keep a safety margin between the edges of the holes and the edge of the bullseye: the worry would be that if the wire catches during removal, it would go through the “handle” and possibly detach a bit.

That’s what I had in mind

Well, I figure we get a professional involved here so Lassi Sidoro from scar.fi just put in his custom flexMT and we discussed rotation. He’s going to review this thread and hopefully comment. 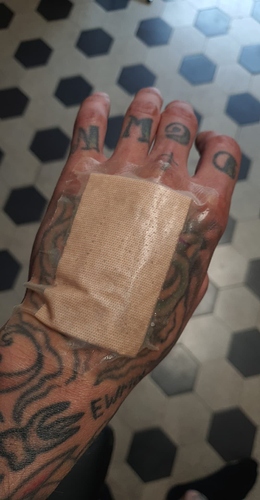