So, I’m STILL trying to wind my own cores. Progress has been slow and painful. I’ve been winding on ferrite cores (2mm dia X 15mm length) glued to the head of a nail that’s held in a cordless drill. Works, but too sloppy for what I’m trying to do.

So basically I need a new setup. There’s a bunch of hand winding machines on the net, the most popular is called the NZ-1, and it apparently is a chinese copy of an old american design from the 1930’s They look like they might work, except they all have a 10mm shaft to put spools or bobbins on.

What I’m doing is purchasing THIS UNIT from Amazon, and THIS DRILL CHUCK (note metric threads) so that I can hopefully adapt the chuck onto the shaft. That should hold a nail or anything similar, allowing me to more precisely wind micro sized coils.

I’ll also need to mount it and provide for a wire spool holder, possibly a guide and / or tensioner too.

I figure there’s enough tinkerer’s on here that this might appeal to some of you. So, I’ll be documenting as I go in case it can inspire someone else.

If you need a hand translating those figures, Just ask ANYBODY outside of America*

Maybe of interest to your project: I wind my clapton coils with this machine: the Avidartisan Daedalus pro v2 microwinder:

It has a very small chuck to hold small diameter wire (in your case, a core) and a spool holder for the thinner wire to be winded onto it. It doesn’t have a counter - since it’s meant to create lengths of vaping coil wire rather than induction coils - but you might be able to repurpose it.

At any rate, for the price, you can’t go wrong.

Maybe of interest to your project:

Trying to avoid power winding. It’s basically the same problem as the cordless drill, goes good at first, then gets uncontrollable.

If you need a hand translating those figures,

Whoa! You mean all metric threads aren’t the same?

Trying to avoid power winding. It’s basically the same problem as the cordless drill, goes good at first, then gets uncontrollable.

Yeah but with that particular tool, you can slow the rotation speed right down to, like, half a turn per second. Very controllable.

The winder is here.

First impressions, kinda heavy built. Steel gears. Except for the rev counter gears, but they’ll never feel any kind of load. It does have a Harbor Freight build quality. The base is rough cast iron, and I had to put it on the belt sander to get it to sit without wobbling crazy.

I can also confirm it’s M10-1.5 thread on the shaft. That’s good because for some reason they use angle grinders to drill holes in logs to grow mushrooms. That means the drill chuck I ordered (it’s for angle grinding mushroom holes) should fit fine.

The shaft is too long. It comes out unthreaded about 1.5 inches from the housing. I was planning to run a die down it, but it’s a larger diameter on the unthreaded part, plus I think I’d rather have it out just a little. New plan, I’ll cut the shaft off with just enough thread to attach the chuck.

I need some kind of base to attach it to. Maybe a coffee serving tray or something. I’ll hafta see what I stumble across.

Chuck came in. I put it on the shaft so I could see how much thread I’d need. The winder comes with two wooden cones (thrown away) and a jam nut to secure them with. I’ll be re-using that on the back side of the chuck. I think the overall length will work out so that it will be comfortable to crank with one hand while guiding the wind with the other.

The picture shows the shaft marked with tape. I’ll cut it off on the left side of the tape. Tommorrow, I will at least. Nice cut-off tools at work. 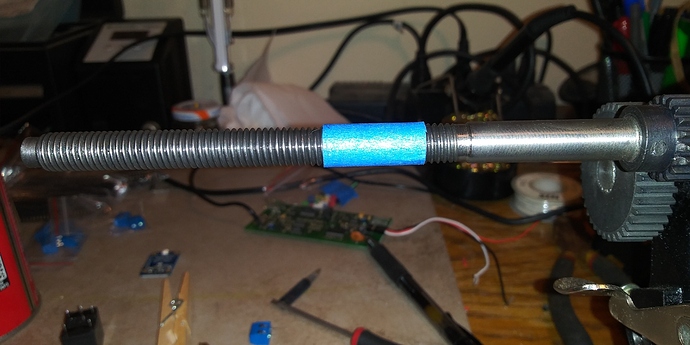 I Shortened the shaft. Cue @Pilgrimsmaster with a circumcison joke! 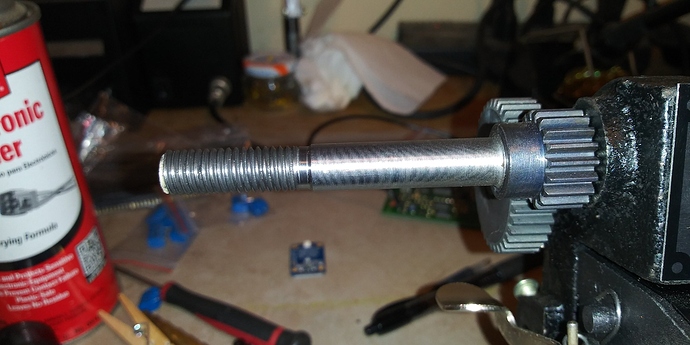 With Chuck and Jam Nut. 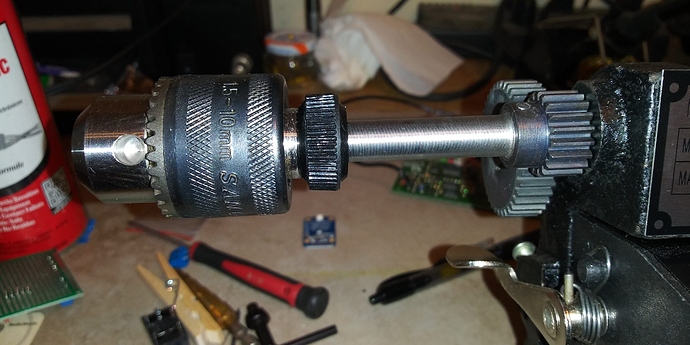 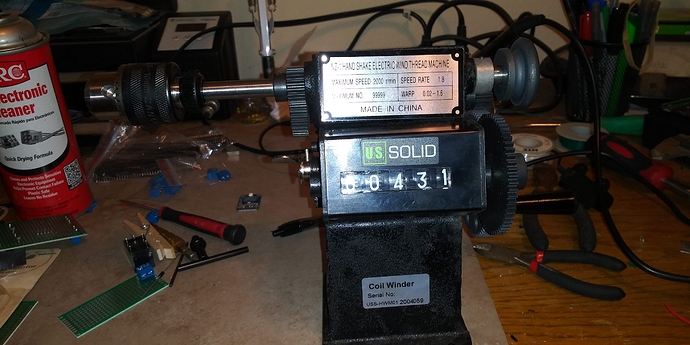 Now I need a wooden serving tray or something to mount it on and make a home for the wire spool. Probably gonna put a few screw in eyelets in to act as wire guides as well.

I Shortened the shaft. Cue @Pilgrimsmaster with a circumcison joke!

How long do I have ie. “I just want to know the cut-off date.”

Just trying to think of one… “It won’t be long now.”

Before you start, measure twice

What about a Nut Jam joke

Winder on a bread / cutting board. Has some foam feet under it so it doesn’t wobble. 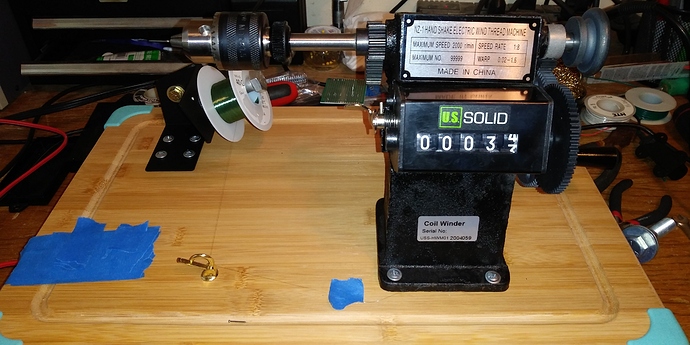 I thought gluing the 2mm cores was tough. Those 1.5 are TINY!
That’s what all the blue tape is for. Tried to build up a couple of areas so that the nail and core could lay flat to each other while setting up. Also, it’s nice to have a disposable surface to put a drop of super glue on.

I set the wire spool on an angle to use friction as a tensioner, seems pretty good. Can’t have much cause the wire is so fine.

Funny, as you were winding further and further away from the glue point, I kept thinking “Wow, amazing that this thing is holding”. And… it went

Never had a problem with the 2mm cores, but the 1.5’s are a bitch to glue on.

You might want to consider making a tailpiece of sorts, or a follower, to solve the problem.