They have begun recruiting for a clinical trial director. So they’ll start with tests in humans soon (could still take a while while they have everything planned).

I wonder what the selection criterias
will be for the candidates?

Elon Musk's Neuralink has begun recruiting for a clinical trial director, bringing it one step closer to connecting the human mind to computers

I want to be part of the healthy subject cohort.

sounds attractive. The only holdup here is that the software that it runs needs to be free for anyone to trust it.

Gives me the willies

I like the concept of replacing organic with metal but wonder how you’d plug the hole if you ever want to get it removed?

I think that plugging the hole might actually be fairly trivial. If I’m not mistaken it is possible to use a scaffold/matrix to grow a plate from your own bone material that could be grafted back into place.

As a matter of fact, it’s probably the most reasonable use case for bone engineering via scaffold since the scaffold will be of a relatively standard size and without any major complexities like compound curves. Essentially a very simple disc with a slight simple curvature.

The stentrodes or fNIRS caps are much better ideas, but they’re not what the muskrat picked so they don’t end up on the news or get rabid fanboys

I literally live for it thoughhhh, sounds kinda therapeutic actually!

Oh wow, really exciting. These next couple years are gonna be mind blowing.

Hopefully it won’t be literally!

I was going to make the pun; but figured it might get under someone’s skin

I made this prediction over a year ago. Putting it here so I can morbidly say “told you so”.
As soon as these are mass market available, I give it a yeah before the first murder happens using one. Not being pessimistic, just realistic with the ingenuity of humans lol. I’m absolutely psyched for true BCI, but it is truly terrifying at the same time.
If this only had the ability to do one “button press”, it would still be insane. Just using outside data, that could be used for so much. Near your house? Press button to open garage and unlock door. Near a light switch “press” to toggle. But the thing is. This has an entire keyboards worth of buttons. The bandwidth is insane!

Brains vary so much from one to another, I question that anything can be “plug and play”, as I doubt any brain is running the same “firmware” lol

I think everything is going to have to be mapped or trained, over months and months of dedicated effort

Worth it for a quadriplegic, but probably not for someone outside of disability

Oh 100%. I think Snow Crash style viruses are decades out. I just know there will be some stupid way to cause havoc. What happens when all the nodes get current. None of them? Ones near vision processing regions? Or just taking advantage by disabling in for ransom.
I’m so excited for the tech that will be possible. Prosthesis with actual human level motion! 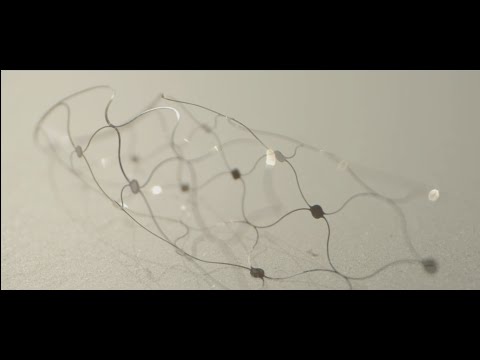 Interesting delivery method, probably less invasive than having a section of skull removed

I wonder how that lattice supports multiple electrodes along its path, at least that’s what it seemed was implied

I wonder how that lattice supports multiple electrodes along its path

Without any mitigation measures definitely. They’ve probably taken some though. The electrodes might have a biophobic coating, rather than just an inert one. Or the array may be able to detect biofouling and can send a signal pulse that can break it up. Or maybe the metal has memory properties like nitenol and mechanically contracts under the right signal conditions

The vascular approach is intriguing because it also allows access to more areas of the brain, vs neuralink is literally only skin deep on the brain, and likely limited areas that can be accessed safely

Not sure how much it matters since I’m still convinced nothing is reading the brain, just picking up trained signals

But options are nice