NExT invalid tag error whenever I scan it

You have had several people say “Give it a week or two for the swelling to go down”… That was a week ago. Perhaps you could give it another week.

If swelling is causing poor reads (which it can) then one app might be doing more checking against the expected format than another.

Do you have any (not implanted) tags that you could use to test the apps and phone?

I had trouble reading a couple of low frequency tags I have until I realised that they were blank. Once I had written something to them I could read them. I am not saying that that is your problem, just an example of how things don’t always work the way you expect them.

Probably doesn’t help, but the vivokey spark 2 in my other hand was put in the same day, and I can scan it just fine

I’m sorry, I know it’s hard, but patience really is key here.
My suggestion would be to wait another week, or maybe even a little more. Swelling can absolutely make weird shit happen with reads, even different results in different apps.

My guess would also be that this one is implanted a bit deeper them the Vivokey Spark 2 you mentioned, and in that case can swelling can make even more of a difference.

If it really turns out that its not working there is practically no difference in removing it now or three weeks later. And I’m sure in that case DT will do their best to make it right.

Phones may have a problem with this because they want to be all fancy and do a lot of reading shit for you, before you even get to do anything else… and this is the problem… if there is a problem that the pre-read process can’t handle you may just get an error message and that’s that… no chance for your app to do anything… is just dead.

This is fixable though. I will have to post an update later today about options.

This is for sharing your files to DT for support, you can also use it to “wipe” the xNT / NExT

When you have done this, Try and write an NDEF record with TagWriter

Have you tried this?

The Dangerous Things Support Tool will collect tag data and report it to Dangerous Things to assist resolving customer support situations. The tool also includes an option to write an empty NDEF record followed by null bytes to the first 10 pages of user writable memory pages. This is something the Android NDEF library has problems doing when tags have been protected by disabling lock bytes with the Dangerous NFC app, therefor all Android applications that use the NDEF library to "factory erase"...

Will it let you write a blank ndef?

You will need an acr122u or probably a proxmark3 to fix this then. Phones are just tripping over the jenky ndef message.

Sorry if it’s been said what phone do you have?

If it is android download and install NFCShell copy and paste the below into the text box and press send. Place over the implant and hold.

what phone do you have?

If it is android

He said it was a Samsung Galaxy S20+

Fingers crossed for you. @AlmightyJest

Is this the app? It won’t let me open it

Hmm I can’t find it in the app store 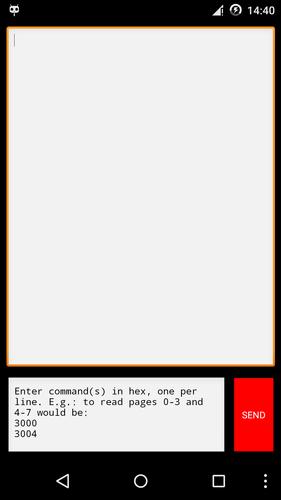 Yeah nothing. I still get the error

You may need to try it a few times. May also be a issue with the “default nfc handler” I.e. on some phones you can set the default app to handle nfc card scans.

What happenes when you press ok and scan again?

Same thing, the error pops up, no matter how many times I scan it

I have tested using a ntag216 with my phone (galaxy s10) and it works fine.

That error is coming from some other app that’s reading or intercepting the NDEF record - it’s not the Shell app, or anything except TagInfo. I suspect this might be because there’s two ways of registering to read NFC tags - saying “i want these” to android or forcing a reader mode in a different way. I’d say TagInfo does the second type, taking over read mode.

See if you can work out what app is making that “invalid tag” box. See how it’s popping up OVER the other app?

i would uninstall all nfc apps you installed and start fresh