I’ve been looking into getting into the NFC chip for a very long time but I recently became an electrician apprentice. I’m planning on doing this for multiple years but I still want to get an NFC implant but I’m not sure if it would be a good idea due to the high voltages I will be working with. Would it be a good idea or a bad idea to continue with wanting to get a NFC chip

It would be a good idea. Any shock strong enough to damage the chip will probably take the rest of your hand with it… Leaving you with much greater problems than worrying about how to remove a fried tag.

You are a giant bag of salt water. A glass encased transponder device could withstand 100kV on it’s own, but surround it with salt water and it’s chances of survival get considerably better. The electrons that would be coursing through your body will have plenty of other, much easier paths to take through your salty wet bag of a conductor.

Somewhat related, but for the Flex or upcoming Vivokey series.

I do an Iontophoresis treatment on my hands once a week. 2 pans of water, one for each hand, and 24 volts across that. I’m assuming that unless the coating is knicked it’ll be fine, but what about over the long term? Nothing’s going to soften or warm up?

but what about over the long term?

nope we’re all good… the dielectric strength of the material is huge and even if it wasn’t, your salty body juice is still a way better path for electrons to take than to try to mess with our polymer.

Sorry to dredge an old thread, but I have a tangential inquiry. Figured I would keep it all in one place for the next person searching.

I also work in an electrically volatile setting. Some of the equipment usually found in power substations that converts the HV transmission signal down to a residential voltage is located inside of my building. I walk by it on a regular basis and I can feel the vibrations in my magnet implant.

I currently have an xNT implanted, and it hasn’t had any issues with being near powerful EMF. I’m gearing up to implant a flexDF in a few days, and I’m concerned about it getting fried because of the larger antenna. Is there some kind of overvoltage protection the DT team adds during construction of the flex tags, or possibly some built into the die of the chip? I checked the datasheet and did not find any helpful information regarding this.

It should not make a huge amount of difference being a flex, but it’s a good question. Keep it in the tube, tape the tube to a stick, and shove it next to some HV… if it fries, we’ll replace it free of charge (pun!)

So I tested out the flexDF. I held it near a gap in the steel enclosure (behind the keep-out fencing) where the field was strongest for three minutes, and then moved it around erratically in the vicinity for a few more minutes. After the testing the Taginfo app read the same information as it had before the test. I would say it’s safe to assume everyday users are never going to need to worry about EMF damage to the tags.

I collected some data for posterity, even though it may not be the most reliable. A magnetometer app on my phone read 850μT from the spot I tested, which is nothing considering my teensy N52 magnet was registering 2000μT. That reading was almost certainly inaccurate because the app had a disclaimer about magnetic fields generated by AC. Here is an image of the transformer label. The input was 13.2kV. The tag was about 3 feet away from the centroid of one transformer during testing, with a steel cabinet enclosure. 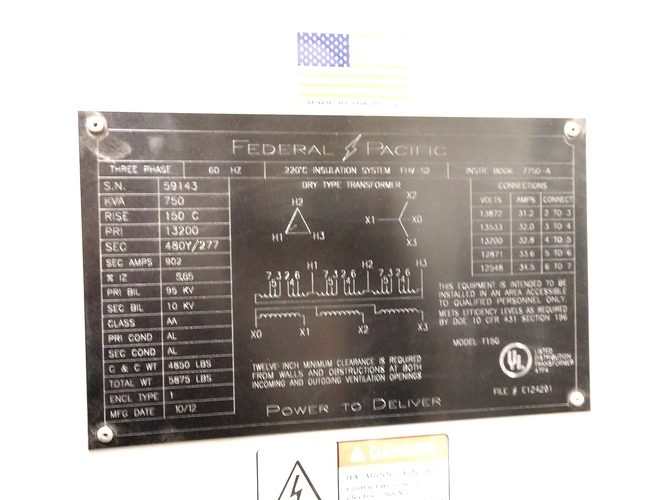