NXP Taginfo shows data, but nfc tools does not

now… in nfc tools app the implant is empty but in taginfo all old data stil resides in the chip. (yes i cleared the scan report)
so after this i used the DT support app and cleared the ndef… (wipe) but still taginfo said the data is on there
even after a reinstall of the app…

so what is true? and is this a problem?

Android only cares about the first NDEF message, so often tools that use the Android NDEF library will only write a single message to the tag. Inside the message there can be multiple records, but again Android only cares about the first record of the first message. Some apps use this to write an app launching mime-type record so on a scan the phone will try to launch an app… then the app can read subsequent records in the message (first record launches app, second record contains app-specific data)… but things like wifi passwords and vcards are handled by the Android OS and therefor you can only really write one of those things to a tag at one time. Here’s a handy diagram of the NDEF format: 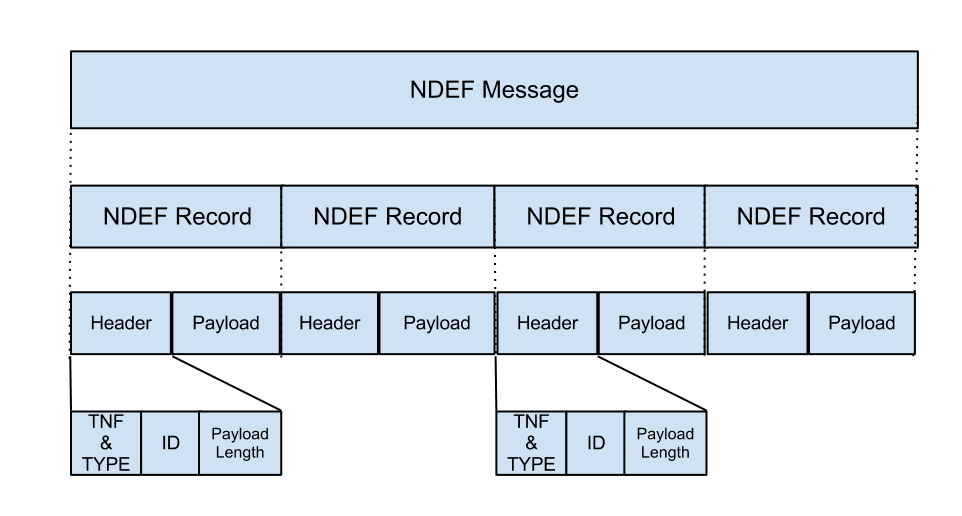 As for the superfluous data… just like any hard drive writing a file, any NFC app will only write as much data as necessary to complete the NDEF message. There is no point in spending extra cycles overwriting data past the end of the NDEF message… that just wastes time and burns write-cycles on those memory blocks. The DT support app writes a blank NDEF message which is very short. Once the message is closed, it stops writing.