A little background. I’ve had my NeXT since mid December and it’s in the usual spot between thumb and first finger of my right hand. It has always set on a slight uphill angle with the end away from the injection site being the closest to surface. Enough that one end was invisible, and the other had a slight, but noticeable, bump.

I was just doing my thing at work, when I noticed my implant hurting a little. Just at one end, the farthest from the implant site. My first thought was infection. The second was rejection. THE HORROR.

I then noticed that it had moved slightly away from the injection site, towards my wrist. Maybe 3/8" or so. (10mm if you’re all metrickey). Normally I leave it alone, but I wanted to see if I could push it back into it’s former position before it healed into place. No joy. It’s staying put.

BUT…
Afterwards it just quit aching, and it now sits nice and level. The ache just stopped while I was trying to push it back.

Not sure what happened. It all seems fine now. My only real worry is that if it should migrate further in a straight line, it’s gonna end up conflicting with a metacarpal. Still it’d take at least another 1/2" (13MM, the empire WILL strike back!) so probably no worries.

the empire WILL strike back!

Might be worth making a splint and taking some more prenatal viatmins!?!

Hey, not everybody can be this awesome!

Might be worth making a splint and taking some more prenatal viatmins!?!

Think I’m gonna take a wait and see approach. SOMETHING appears to have shifted or settled. Maybe for the better even. 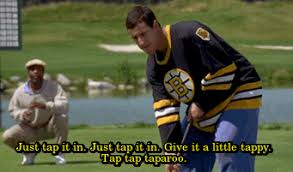 I tried the vitamins - didn’t make a bit of difference.

I think there’s no point in fighting uncoated chips: they’ll find their way to where they want to end up sitting one way or the other and that’s that. You can of course take vitamins and be super-careful for a long time, and get more or less successful results: But I’m too lazy for that. I’m only careful with coated implants, until I feel the telltale hardness around them that tell me they’re anchored nice and good.

I tried the vitamins - didn’t make a bit of difference.

You can of course take vitamins and be super-careful for a long time, and get more or less successful results: But I’m too lazy for that.

Seemingly contradictory statements. You can take prenatal vitamins diligently for a few weeks after implantation and it will help, or you could not. I feel from your description that you’re closer to the not category. That doesn’t mean other people shouldn’t. It’s not snake oil.

I’m also too lazy for that, though

What I meant was, I tried the vitamins and the waiting and the being extra-careful for a few weeks, and it seemed as if the chip had settled. But suddenly out of the blue, it decided to take a hike and settle elsewhere it’s obviously always wanted to go to anyway. So I just gave up and I let it stay where it wanted to be - and it doesn’t really matter one way or the other, ultimately.

One’s body isn’t another person’s though: mine just doesn’t seem to react to anything. Yours might. The vitamins might work for you, but they ain’t doing nothing for me. But that’s just me…

Biobond on the other hand works great for me.

No such luck. It moved sometime today, closer to bone. 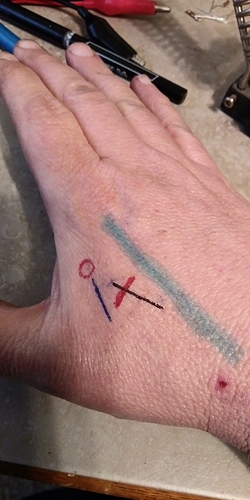 20200313_174110972×1944 973 KB
The red circle is the needle incision point.
The thin BLACK line is the current NeXT location.
The thin BLUE line is approx. where the original location was.
The thin RED line is where some piece of my anatomy crosses over the NeXT. Kinda feels like a vein.
The WIDE LIGHT BLUE line is the first metacarpal.

I can’t shift it around / move it back. It feels very firm.
If it keeps going, it’s gonna end up on top of bone. It’s darn near butted up to it now.

Edit* The more I look at it, I think I got the original location off, right spot, but too much angle. It’s just a guess though.

Hi there!
Has it shifted any more? Just read through the whole thread and now I’m invested

Hope all has worked out for the best!

I’m almost certain I know what’s going on - because all my uncoated chips have done the same thing. You implanted it on top of the thenar muscle bulge, like most everybody. But that’s an unstable position. Now it’s “chosen its side”: it’s decided to slide down the muscle towards the index metacarpal, and it’s settling between the side of the thenar muscle and the bone.

That’s the lowest point in the area, so it’s mechanically inclined to go and stay there. I.e., it won’t climb back up the bone. It may abutt the metacarpal, but that’s fine as long as it readily moves out of the way when you press on it.

It may also not settle there and keep on sliding backwards to an even lower point, at the junction between the thumb, index metacarpal and the base of thenar muscle. Mine did that. It touches bone at the end and along its length and it’s just fine. So don’t worry too much.

Rosco pretty much nailed it. Once the end got close to bone, it just stopped going anywhere and it’s completely stable. The only bad thing is I keep trying to scan it’s old location. Then I have to shift a bit, and voila!