Ok, so I’ve put this off forever

I do like it, it’s made of actual steel, not just sheet metal… and fully welded… plus that door seem is very nice… much harder to pry
Thing weighs probably 40? Lbs… it’s physically built nice…

This is the board that controls the opening and closing of the bars, excuse the bad photo
Black red are power to the motor,
Red green are input power
White are various stop switches for bar travel and programming button
Grey is coming from the security panel
(I doubt I could spoof that… but maybe it’s easier than I assume?)

I’m hoping / assuming that the board manufacturer would have 2 points on the board they can short to test the power cycle?
Presumably that’s easier on the manufacturer end to test than sending lock unlock signals via the ribbon cable

Am I wrong in my thinking here?
My initial plan is, If that’s a thing, I can simply hook an XACv2 to it, and hit that circuit to tell it to open/close

Next question if that likely exists, is how do I find it

I’ll try to get some better photos and videos later, just putting it up so maybe in the meantime someone has some ideas

And no I won’t run AC this time

I assume that there is a keyhole under the nice looking “viking” plate.

If/when you dismantle it it would be nice to have high quality photos of both sides of both boards.

I assume that there is a keyhole under the nice looking “viking” plate.

Yea, I only have a semi shitty of parts moving at the moment

Do note that the solenoid on some of those is poorly protected from outside vibration and impacts.

Doesn’t use a solonoid, uses a motor that cams the bars in and out and hits 2 stop switch’s

Don’t see a magnet doing anything 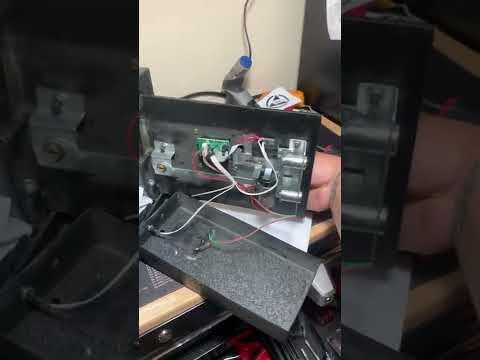 You actually got me thinking about doing a conversion on my own safe. The quiescent power of the xACv2 is a significant concern for a battery operated device so I thought maybe it would be nice to have it turned on and off by like a microcontroller or something. I know the attiny45 can go down to something like 20 nanoamps if you set up a special sleep mode with an interrupt to wake it. Then I realized that a 555 timer would probably be ideal since it can be set in oneshot mode. So I found this online that does exactly that https://www.edn.com/555-timer-draws-zero-off-current/

Doesn’t use a solonoid, uses a motor that cams the bars in and out and hits 2 stop switch’s

I didn’t realize that the safe you’re modifying doesn’t have a knob or handle on the outside.

That mechanism should be significantly more secure than the solenoid based safes.

I think I’m going to do something very similar to my big safe, a small 12v ups inside the safe

The big safe version can get about 48 hours without power

I think I’m also going to keep the AA battery pack as input power to the system, so the xac only had ti activate the system

I’m not opposed to some kind of push button to activate like 60 seconds of power to the xac, but I don’t have the knowledge base haha

some kind of push button to activate

Why not just use a toggle switch? You turn on and let it boot up, swipe your implant and let it unlock, then turn it off when you close the safe? A little risky if you forget to turn it off, I suppose, but it is likely one of the easiest solutions and doesn’t require anything other than a toggle on the power line???

The thought did cross my mind

I do love me some missle cover switch’s

I just found this… which could have some possibilities

Features:Function introduction: The time delay relay module adopts NE555 as the time base.Function: connect power supply to module, the relay switch connected immediately, and then after a estimated time, the relay switch...

that is some of the fun with a 555 timer. Just google “555 timer one-shot calculator” and you’ll find a couple sites that can help you figure out what values you need.

edit: just looking online you can get approximately 2 minutes with the easy to get values of 470K ohms and 220uF. Just plug those into r1 and c3 like the guide says and you’ll be good to go.

How many AAs does it use?
What’s the operating voltage?

What is the default action if the safe looses power? remain locked or unlock?

12v for xACV2 + ?V for safe electronics (Buck /DC-DC / regulator)
Missile cover with momentary switch for power only when you need it.
run external power socket incase of loss of power internally.

Mount the xAC V2 antenna behind the Fingerprint scanner, and pick up the unlock wire with the xAC NO wire (yellow I think)

I just found this

Yeah. That looks like a much better solution then a toggle. Though the missile switch idea seems cool!

You could always do both. Switch to the button, and if you forget to turn off the switch, then this circuit sorts that for you. I appreciate this has no real purpose other than aesthetics in using such switches!

Mount the xAC V2 antenna behind the Fingerprint scanner

I hadn’t considered this; I was thinking of either removing the front panel entirely and making it slick like my big save, or a secondary panel below the stock panel

What is the default action if the safe looses power? remain locked or unlock?

Uses 4xAA inside the door, they get plenty of life
So I would just skip the buck converter and use the aa to power the safe like normal, just need to supply power to the xac…
I was thinking 12vdc for simplicity

You know what would be stupid, but amusing?

You know the “useless” box that flips the toggle switch closed after you flip it?

Rig that up as the power switch to the xac

Flip the switch on, and then 30 seconds later it opens a hatch, and flicks the switch

I think that’s about as far in as I’ll dig tonight, lemme know if those pictures are good enough for the pcb gods

I also found a phone number, so I’ll hound them tomorrow

5V if you power it at the output of the built in linear regulatior. It uses a 78M05 IIRC.

It would be a good idea to have a way of powering the thing from the outside, either by moving the battery compartiment to the exterior of the safe or installing a connector of some sort. Maybe a USB connector or a 9V battery holder?

Also, I’m not sure that you’ll be able to get that board to toggle the state of the safe so you might need to drive the motor separately. What happens if you turn the motor by hand until the microswitch disengages?

It would be a good idea to have a way of powering the thing from the outside, either by moving the battery compartiment to the exterior of the safe or installing a connector of some sort. Maybe a USB connector or a 9V battery holder?

I was thinking about that,

Because there would be the rfid system,
Biometric system, numpad system, which would be on a different power system
and mechanical backup lock

Back when I was doing my magic toolbox project, Satur9 came up with a neat low power capacitive touch unit. Super low draw if set up right. You could isolate some innocuous part of the safe and use that for power up. Or just use the whole thing.