Playing around with SiiD modules

I recently got more SiiD modules to lake xSIID with but they weren’t labelled so I had to test to figure out the colors. Ended up with 3 “testers”, which made for some pretty interesting tidbits.

The advantage here is the LED is so far away from the coil you should have no problem with your phone covering it. They are 7mm by 40mm though. Long. 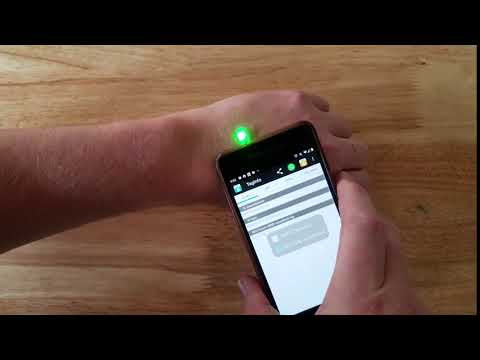 Considering what to do with them… might put up for sale as “odds and ends”… might implant them… dunno, but I find it interesting.

With how fast advancements are being made for various types of implants, it almost makes me want to hold off on buying the FlexNExT…

Would it be possible?

Would it be possible?

it’s up to your and your installer… but it looks doable. the size of the led module and thin wires and narrow cut of these make them super flexible.

I’d get the blue and white without hesitation. I got a project idea.

I’d get the blue and white without hesitation. I got a project idea.

ok. i’m keeping the green for me, and i’ve offered a choice between the other two to a special friend of DT… but if they don’t want one then I will consider your post “dibs”.

If I put one in my face, would the phone light it up when I am talking on it?

hah depends on how you hold your phone… do you hold it so your microphone and speaker are facing away from your mouth and ear? if so, then probably yeah

Hey, that is fair.

I was unsure if the flex form would pick it up through the phone or not.

I was unsure if the flex form would pick it up through the phone or not.

it’s more a function of the phone than the tag… given the range of the flexNExT it should, if the phone’s components weren’t such an impediment to the NFC magnetic field.

To be honest, I think some phones even put a backing layer of ferrite polymer to shape the field such that the phone’s components do not interfere with the NFC field. This is commonly used in wireless charging receivers as well.

hark do i hear “flexsiid”

When you make these, are you able to add Glow power to the resin?

I would take one in a 3mm x 12mm if possible or if that size would make a difference.

you mean the xSIID with glow powder? it’s not likely… but I will talk to our factory about using non-standard resin.

Thanks for clarifying. That would make sense they would want to shield it from the other parts in it.

Hey no need. I feel like that could get expensive quick, I don’t need one that bad.

If I am putting out for a custom x series implant, I would rather it be one you messed with and feel confident in.

I think the take away is, flex’s can/should have blinkies now

yes and no lol, the SIID module is specifically a ntagi2c chip with a power harvesting output that is connected to an LED. I dont think were going to see normal sized flexes with led’s just on a realistic standpoint.

How would you connect an led to a flexM1 and maintain the same footprint, I don’t think you could. But I’m willing to be proved wrong

How would you connect an led to a flexM1 and maintain the same footprint, I don’t think you could. But I’m willing to be proved wrong

it’s possible but annoying… it would require special carrier pcb and led and probably a resistor too… and it would change the tuning of all the antennas i’d need to use… and nobody publishes the capacitance of their LEDs so it would be trial and error… just a lot of annoyance.

See to me that is not feasible, thats too much work for such a small gain.