Transdermals breach the skin barrier and require a lot of care to keep clean and free of infection. Not great.

Subdermally-implanted magnets don’t breach the skin barrier, but anything stuck to them pinches the skin and causes anoxia and necrosis. Not an option.

So here’s an idea I’ve been thinking about for quite some time. I’m submitting it to those in the know, to figure out if maybe it’s been done already, or if it’s flawed for a reason that escapes me.

Here’s the cross-section of a natural, unmodified wrist:

Now here’s where a traditional transdermal implant would sit:

Instead of doing that, imagine implanting a titanium rod subdermally (say, Ø6 mm or something) and letting it heal and settle for a few weeks. It would look like this eventually:

Finally, to anchor something to it, a sort of hollow clamp with “claws” would grab it from underneath like so:

Crucially, the anchoring clamp would not pinch the skin, but rather trap the rod and surrounding skin inside a hollow cavity. The "claws’ would be suitably thick and rounded off to avoid cutting through the taught skin.

Or, instead of a rod, the titanium implant could be a ring, and the clamp’s “claws’” would spread outwards and trap the ring from the inside, lifting the entire ring off the arm.

Of course the anchored device would not sit flush against the limb, so it would possibly not be a good idea for smart-looking jewelry. But I’m more thinking about watch-like devices.

Bear in ming that the above illustrations are rather poor photoshopped jpegs. None of them are to scale, and I expect the final outcome to look significantly less terrible. But they illustrate the basic idea.

This seems too simple and too obvious. So what’s the catch in my idea, before I start getting more serious with it?

Crucially, the anchoring clamp would not pinch the skin

I think the one thing I am failing to see, is how the clamp does not pinch the skin according to you.

I am sitting here messing with my chip implants, and I am still feeling pressure where my makeshift clamp has to make it under the implant to stay put. I am also using a clip made of metal, so no custom work done to it.

I would almost think a surface piercing would be better for it. not a single point one like you show above. One like my friend Google has. 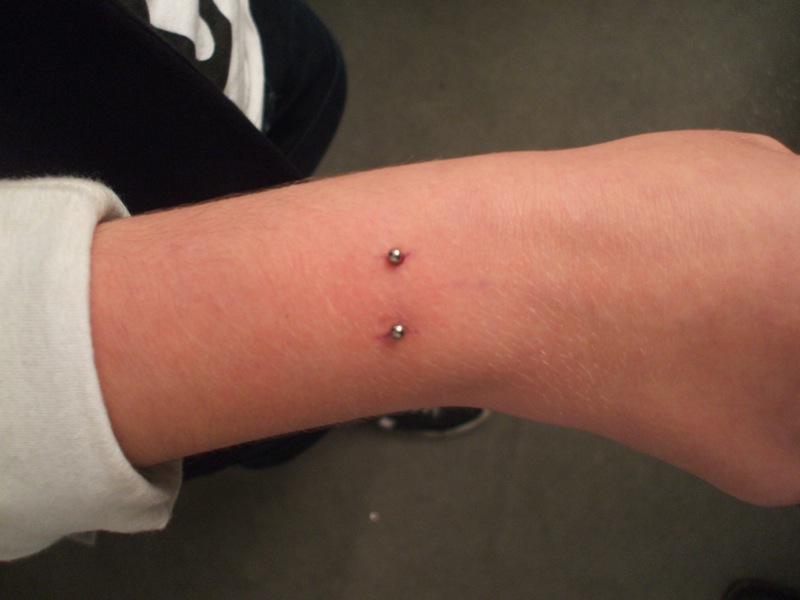 Edit: I have been half tempted to make my own wrist pocket since you brought it up months ago.

I think the one thing I am failing to see, is how the clamp does not pinch the skin according to you.

Sorry yes, it does pinch the skin obviously. What I meant was, it does not put relentless pressure on it and cut off blood flow.

is what I want to avoid - unless it forms a skin tunnel, which I understand takes a lot of time, and once formed, can become nasty if it’s not cared for properly.

Sorry yes, it does pinch the skin obviously. What I meant was, it does not put relentless pressure on it and cut off blood flow.

That makes more sense. I wonder how much pressure is the right balance? Don’t want it flying off, nor do you want it killing your skin. If it is for a watch, I would make sure to set a timer for every 3 hours for a 10 min break for my skin.

is what I want to avoid

unless it forms a skin tunnel, which I understand takes a lot of time,

Yeah, it would likely tear out of my arm before that point was reached, unless I kept it taped up.

and once formed, can become nasty if it’s not cared for properly.

Yeah, all my piercing holes do this, I imagine as long as you wash and dry it, it would be fine.

Also, just a quick snip with some scissors would get rid of it. Or you could go to a doctor since they won’t send you to collections for it.

I wonder how much pressure is the right balance

The idea behind my little rod thing is that, once closed, the clamp does not put pressure on anything. Rather, the size of the opening between the “claws” is too small to let the rod through. That’s what keeps the device anchored.

Whatever tension in the skin comes strictly from the fact that some of it is folded around the implant inside the clamp, and that puts tension on the lengths of skin either side of the clamp.

I suppose if you had such an implant and clamped a device often enough and long enough, the skin would stretch and the device would eventually become loose and dangle from your arm. It would remain attached, just not tightly against the limb.

For information, there is something similar to what I’m describing in the ever-inventive world of amputee rehab: it’s called the humerus T-prosthesis: what it is essentially is a T-bar screwed into the bone, providing a wide control area at the distal end of the residual limb, to better control an external prosthesis without breaching the skin like osseointegrated abutments do:

I just played around a bit with my (totally healed) silicone implant, because I thought this might feel very uncomfortable, but it is kinda “okay”. Still, I wouldn’t want to attach anything to it (and of course, a silicone implant is to flexible for your idea anyway), but it should be possible, especially if the skin stretches a bit over time. I think you just have to find out very carefully what amount of pressure (from the clamp) is good - too little, and you lose whatever you attach; too much and you might irritate the skin a lot, maybe leading to similar issues like those known from magnetic attaching.

Yes, the skin should stretch enough to fold over without pulling too hard. My thinking was that the body should take care of finding the right balance, if you “train” over time by wearing the clamp gradually longer and more often.

I’m really thinking of implanting a ring if I’m honest. The device would sit in the middle, and the “claws” would slide underneath from the inside - pushing the folded skin underneath. I chose to illustrate the principle with a simple rod because I didn’t want to spend hours photoshopping stuff. But a ring is what I have in mind.

I’ll ask Lassi. Surely he has an opinion.

I’ll ask Lassi. Surely he has an opinion.

With the ring-idea, you have to keep in mind that it might take some more time - I know from my implant, that it takes a significant amount of time for the skin to settle down in the “hole” of the ring, for the skin has to grow for that. So it might take longer to stretch the skin there, compared to the outside of a rod or ring, where you can grab skin more easily.

If you let it drop down into the hole, yes. But not if you insert something to stretch the skin on purpose. After it’s all healed up, naturally.

Yep, might go faster that way, of course.
And if you put the clamp on the inside, you migth even go with a silicone implant - pressure from the outside will push a ring together, but pressure from the inside won’t deform it much… might just be a lot more comfortable than a titanium implant (and safer, considering daily life and such…).

Not sure about that. I’ve worked with O-rings and they tend to let themselves go and fail when they’re subjected to constant forces. Something that won’t stretch or break from material fatigue would be required here.

What would be the benefit of doing it this way rather than a wearble device with a strap? Not poo-pooing the idea, just curious as to your thought process that lead to this.

My initial feeling is that it’s way too impractical and even if you got it to work, it would still likely cause a bunch of problems with nerves and blood vessels, especially if it’s something that is being taken on and off. Sounds like constant irritation and would be rather uncomfortable to wear.

What would be the benefit of doing it this way rather than a wearble device with a strap?

None - but it would be different

You might ask the same thing of people who implant transdermal jewelry: what’s the benefit over wearing a necklace or a ring? Same thing.

My initial thought when you described this as going into a subdermal “ring” anchor device, was something like an upholstery clip / trim plug or even a hollow wall anchor or plastic toggle anchor.

Something that you would insert into the cavity and would expand to LOOSELY grip so as not to put direct pressure on the skin, but enough resistance to prevent removal.

Maybe an approach you could consider, or enough to inspire an idea?

Rather than explain it, here are some images for reference

But really what I’m thinking of is a device that goes through the ring and expands behind it - with the skin folded up in between. There would be no gripping per se: it would stay there simply by mechanical interference. Whatever pressure / tension on the skin would come from the weight of the anchored device, and the elasticity of the skin if it hasn’t expanded enough yet.

Wouldn’t you get a better effect with distributed magnetic attraction?

Say a flex or even a flex next sized implant, but 10-12 small magnets

a device that goes through the ring and expands behind it

That was what I was thinking with this one.

device that goes through the ring and expands behind it

Have you tried doing this with your DoNut?

and the elasticity of the skin if it hasn’t expanded enough yet.

I had a dream about this today. What is going to fill the cavity of this when it does start to stretch? Will there be fluid buildup when you take off your device?

In my dream, I had one of these, and it was like a balloon that filled with fluid each time I took it off.