Taking the long road to creating a skin tunnel

Okay so I’ve got an idea that being going around in my head for some time now, and I’d like the opinion of a bodymod, or someone in the know.

I’d like to create a longitudinal skin tunnel somewhere near my wrist, roughly where a watch would sit if I wore a watch, that’s at least an inch long and half an inch wide.

I could use that “pocket” to insert and remove small objects at will, such as RFID transponders of course, but also USB fobs, and small battery-powered gadgets of my own design. Hell, if it stretches enough, possibly even a coin-sized RFID fob.

It would be close enough to a real implant functionally, yet a lot safer if the gadget goes wrong, and easier to rework the gadget or plug something to it while I wear it. And I could very easily vary what things I put in it, or try new implants without going to the piercer and committing to a permanent implant.

As it happen, I already have a small version of what I have in mind on my, ahem, gentleman’s appendage, because I was circumcised at an age when, well… skin tends to stretch unattended there if you catch my drift. Long story short: I had a suture there that got stretched repeatedly over a few weeks, and it left a small, thin skin tunnel when it was removed. It’s still there decades later, and it’s easily long enough to insert a grain of rice in and cover it entirely.

So if I wanted to create a bigger version of that skin tunnel on my wrist, as I see it, there are 3 ways to do it:

Anybody knows if that’s even doable?

I’m no doctor but it seems as though cleanliness would be of great importance. I do have my ears gauges which is similar to one of the processes you described. If you don’t clean them regularly they tend to get very foul. On top of this, consider what would happen if you were doing something labouring for example and you’re not paying attention. It’s not as common with my ears because I tend to protect my head in general but having holes in the wrist or around that area could easily lead to them snagging some things and possibly even getting torn. I did at one point have 3 piercings on my right wrist and I didn’t really enjoy having them there.

The thing with a regular implant is it’s under the skin. So at most it’s as uncomfortable as a large zit, if that. But once you add something like what you’re talking about I would imagine it gets much more unbearable. In terms of your penis pencil pouch, again it’s out of the way in an area with not a lot of action going on other than maybe rubbing the side of your pants (no offence).

But your question is if it’s possible. I would say so. I think it would take a while to heal (again being a high traffic area on the wrist) but my undedicated ass would say it seems like it would work. But if it was me doing this I would attempt doing this a little farther from the wrist. Perhaps the bicep of even the abdominal region.

This is all also coming from someone who does a lot of labor intensive, hands on kind of stuff. If that’s not you then you shouldn’t have to worry about the stuff I’ve been talking about for the most part. I’m by no means trying to convince you one way or another, just trying to contribute some thoughts and contribute to the forum:) maybe consider asking a doctor though. I am certain they wouldn’t do the procedure, but they could provide useful information that a piercer might not know.

I’m not sure if you mean holes in my wrist while I’m creating the tunnel, or after it’s created. While creating it, if I went the piercing or scalpel way, then yes there’s a risk of catching on something. If I went the slow, stretch-it-without-poking-a-hole-through-it route I imagined, then my wrist would essentially be taped up for months on end. Nothing to catch on to. As for the final result I want to obtain, unless I insert something large in it, it should lay fairly flat and taught against my wrist.

Maybe I should draw what I have in mind. It might be clearer…

again it’s out of the way in an area with not a lot of action going on other than maybe rubbing the side of your pants (no offence).

Weeell now, it does see a lot action. But yeah, mostly it’s lubricated

Yea I’m trying to picture in my head what you’re thinking about but I might be on a different page. My facts are messed up surely but there was an African child army where they would kidnap these children and drug them up by shoving drugs into a pocket they had cut into the children’s arms. So I’m envisioning something like that and/or the same thing but with another hole at the bottom of the pocket (a tunnel).

Another note to add is that when you are gauging the hole to fit something’s that’s roughly the shape and size of a quarter, you then put the quarter in. But because of the round shape, different parts of this tunnel will be under different tensions. And it may not be the case with the skin in the area you’re looking at but I know that if I don’t wear my gauges in my ears for a while the hole will shrink a decent bit. Every body is different but this could lead to your device getting stuck. Similar to trees growing around fences or swallowing whole bicycles.

Here’s a rough sketch of what I’d like to achieve: 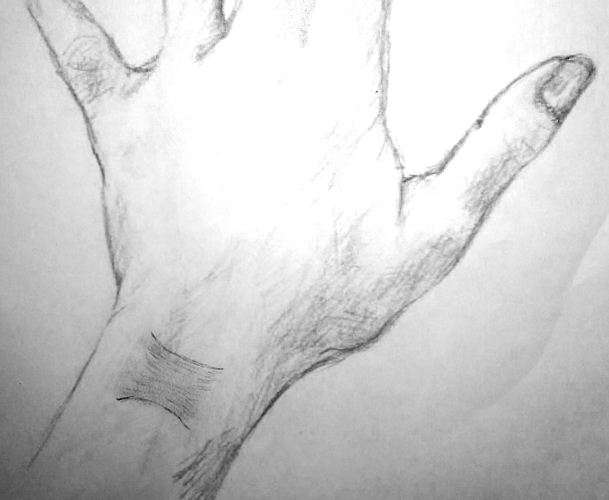 ’m no doctor but it seems as though cleanliness would be of great importance. I do have my ears gauges which is similar to one of the processes you described. If you don’t clean them regularly they tend to get very foul.

This, just knowing how gnarly mine can get if I dont take em out and clean them for a few days a skin pocket of that size could literally smell like death.

Another thing to keep in mind is what you are putting in it, putting crappy metal in your ear holes can cause issues and porous materials can harbor alot of unwanted bacteria and all this gets worse if you have oily skin.

I wonder about blood flow to the area above the pocket.

I had a friend that gauged his nipples so he could sneak stuff into raves. It was years ago and I have lost touch with him but it was pretty successful if I remember correctly . We nicknamed him “chest pockets”

People tried similar stuff, using an approach similar to cosmetic surgery calls pedicle flaps.
Back in the 90s I remember seeing a pocket similar to the one you describe, on a guy’s belly.

Anyway I don’t think this kind of procedure ever got out of the one-shot experiment within the bodomod scene.

By the way: having the ability to heal an artificial pocket on flat skin was also the initial idea behind pocketing and flesh staples. Had a few of those: they looked nice, but never really healed.

I have been thinking about this all day.

I think personally, your best bet would be to take it slow, and stretch it like people stretch earlobes out. I would go slightly bigger than what you need, so you can always throw a barbell back in if you want to keep it open, but have nothing in it.

It would also help keep the top vascular-ized.

Thanks you guys for the replies.

On the other hand, assuming I went ahead with my idea of slowly stretching the skin inward (and assuming it works at all), it would be such a long process that I would have plenty of time to see bad things coming - if it starts becoming unhygienic or painful or just plain difficult to live with. Also, I wouldn’t have pierced anything that would have to heal if it turned nasty.

I guess the real problem, aside from the patience it would require, would be walking around year round with tape or bandage around my wrist. I can see that quickly becoming socially awkward or suspicious: I once knew a girl who constantly had bandaged wrists, and it turned out she had an unfortunate habbit of committing suicide on a regular basis. I’m not sure I want to be mistaken for a wrist slasher…