I missed a day

In the last quarter, you and NoUsersLefft visited 91 days, instead of 92. So some time in the last 3 months, you missed a day.

It can be arranged.

Hey @Backpackingvet , I thought you had your Covid Jabs

string parsing in C is a fucking nightmare

That is very unfair. String parsing in C is not that good.

I have string data coming in as const char *data that I need to parse. The first bit will be a number (the number of sales, could be 1 to 3 digits long), then a space, then some more alphanumeric string stuff. I need to figure out how to pull the number into an int variable then track if it’s increased since the last time the data came in. Strings and data types and finding the first space character so I know how to split it off… well let’s just say I don’t think in these low level computer logic terms so well. My thought was to create a separate function call and pass the data variable to which could parse it and check the current count with a global variable’s value and if it’s > then hit the pin real quick before passing control back to the loop… but like… how?

Thanks! I’ll check it out later once I get a chance to tinker on this again.

If you’ve ever wondered how those anti-theft tags work, when you pass through the portal at the store, whether they are RFID, RF, UHF… wonder no more: I found this cool video from Ben “Applied Science” Krasnow (if you don’t know this guy incidentally, watch his videos: you’ll wonder how you went through school without him as a teacher): 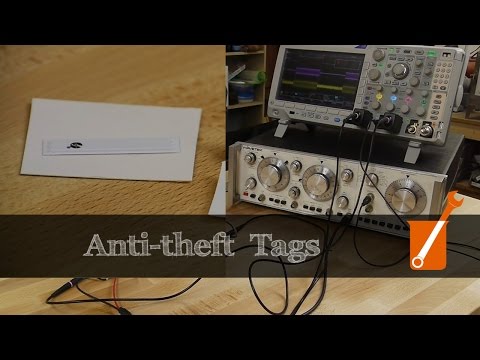 It’s nothing to do with RFID - or it is, in a caveman sort of way - and it’s pretty damn interesting.

whether they are RFID, RF, UHF

Actually not this part… these are called “bit tags” either binary 1 or 0, on or off… RFID tags are iso15693 and 13.56MHz that leverage EAS features (electronic article surveillance)… in fact we have to disable these features on the VivoKey Spark 1 or you might possibly be setting off badly configured antitheft systems in certain stores that use RFID tags for inventory control (and antitheft is part of that system).

I get an error;

My ignorance (and unwillingness to properly figure this out myself) is woefully showing here, but basically what I’d like to do is something like this;

Part of the problem is that C doesn’t really have a “string” type, it uses an array of characters instead (and frequently just deals with pointers to those arrays).

However, if you can guarantee that the format of the array is 1 to 3 numeric digit characters, followed by a space, followed by some alphanumeric data that we don’t really care about, it is a lot easier.

Fortunately as @anon3825968 noted the atoi function ignores any leading white space, converts the digits into an integer, and then stops when it hits the first non-digit character.

So to grab the integer you just need…

So, save your current count and have a comparison…

Ah yes sorry, I should have mentioned it: argv in a main() function is mutable - and I whipped up my code snippet based on that cuz I thought it was obvious.

You need to copy your const char * to a char * if you want to modify it. If you don’t intend to modify it and the compiler complains about the assignment, you can cast it but it’s not terribly clean.

EDIT: looks like that ship has sailed. I really should refresh my browser more often

@Pilgrimsmaster Tumbleweeds? Stand back, I got this.

I present to you an argument against metric time.

That oughta stir 'em up!

What is so difficult about that?

I can’t for the life of me imagine that metric time, given it’s pedantic need for unambiguity would permit an A.M or P.M. designation. I submit to you sir that there are only 10 hours per day.

Furthermore I would point out the possibly false assumption that this time system would experience time zones (see unambiguity comment from above).

So it’s 18 metric minutes past the origin point, which is assumably the Greenwich Observatory, although that would be an assumption all of it’s own.

The clock could then be anywhere in the world, although the sunlight would suggest it’s nearly opposite whatever is being used as a prime meridian.