Tragus Implants and You (but also me)

It appears to be a solid piece of metal like graphite or such wrapped in thin red wire. Dosent seem to have any magnetism. I know that when I use to wear these aids if you placed a magnet up to that location on them they would automatically switch to T mode upon detecting a magnetic field. There is another coil present which is a thin copper wire wrapped around a shiny smooth piece of metal, I assumed this could be the bluetooth antenna but I could be wrong as to which one is which. You can see this on the first image below the lower back microphone (black thing at top behind forward mic) 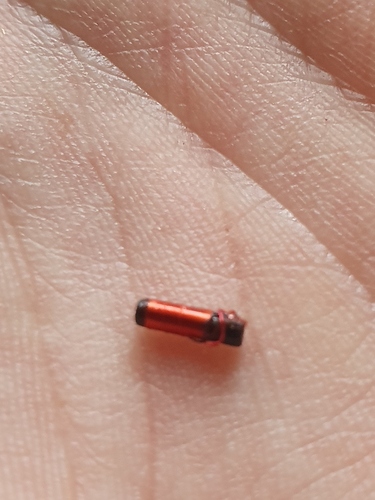 Is behind the ear a viable implant location? Direct skull contact, no cartilage?

So I tried that with some smaller magnets glued to my head and a transducer element pressed against my head, and it didn’t work better. Directly against the tragus is by far the best spot. I also talked with one of my guys who designed a bone-conduction headset, and he said his findings agreed with my testing. His hypothesis was that the ear bones are suspended in flesh, they don’t actually touch the skull, so the best way to deliver sound to them is to vibrate the cartilage around your tragus. Less distance to travel, and fewer transitions between materials with varying densities.

I also tried soldering the commercial coil to my 160W amp. It didn’t work, and I think it broke the amp, but I learned some valuable lessons about how impedance works. I’m basically going to want 4 ohm impedance around 10Hz (where resistance dominates) to get maximum power delivery without tapping out the amp. Once we get into the higher frequency ranges (where inductive reactance dominates) I’ll need to make sure that the impedance doesn’t go too high (because that’s how I broke my amp).

Also, to get maximum field strength (B) I’ll need to follow the formula on this hyperphysics page which shows maximum turns and maximum current is desirable. So I’ll need to strike a balance with the coil of having many turns, and being able to accommodate much current, but without too much Inductance (because it will inflate the impedance at high frequencies and bust the amp). I’ll probably need to get rid of the steel ring to lower the Inductance. That’s a bummer, because it was also helping to act as a heatsink. Maybe I’ll switch to aluminum.

Looks like I might need to include a “Boucherot Cell” in parallel with the coil to provide a low impedance path at higher frequencies, effectively capping the frequency response of the coil =/

Also, aluminum is not going to work out. It will absorb some of the magnetic field and heat up like crazy fast. Going back to “Self-Supported” coil designs from now on. Friggan metals…

Ordered some permalloy tape, which has a relative magnetic permeability of 100,000 (compared to 100 for the ordinary carbon steel I was using before). Unfortunately it won’t arrive until March.

With this in hand, I can laminate together some strips to form a ring with a concave channel facing outward with will contain the coil. This will dramatically increase the field strength (hopefully a fuck-tonne).

Using this core material will also dramatically increase the inductance of the coil, which I will have to mitigate to keep the impedance under control. At very high frequencies, I plan to deal with the inductive reactance by including a Boucherot Cell in parallel with the coil. At very low frequencies I plan to maintain the impedance by controlling the length and thickness of the magnet wire.

In the mean time, I’ll be doing testing with other coil designs and trying to source a new (more ideal) amplifier, since I destroyed the last one.

EDIT:
Received the Mu-metal, despite the quarantines.

Made a core for my coil. 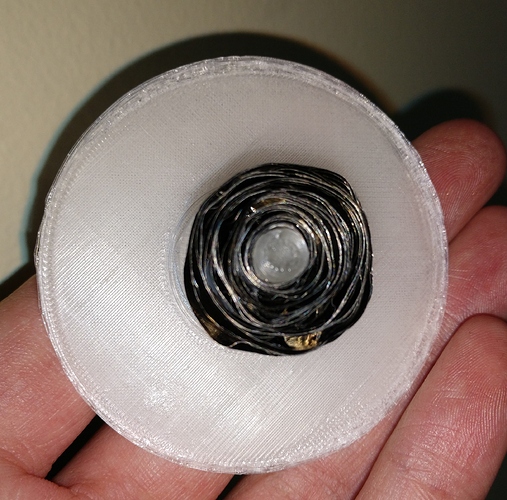 Is behind the ear a viable implant location? Direct skull contact, no cartilage?

I think a better location would be a tooth. There are several pros:

Has anyone tried it?

Oi, for some reason a implant inside a tooth sounds like a bad time. Magnet sense is literally it vibrating albeit with very small force no? inside of a tooth near nerves could be bad.

I doubt it. Teeth vibrate all the time - when you talk, when you bite on stuff, when you grind your teeth - and they don’t hurt, unless you have some kind of a problem.

Anyway, sound conduction through teeth isn’t new. What would be, possibly, and what would be of interest to us is using a magnet excited from an external coil to transmit mechanical vibrations to them.

EDIT: also, I wasn’t talking about inserting a magnet in a live tooth. Now that would be a bad idea, like you said

I was talking about glueing a magnet to a live tooth, or installing a crown with a magnet on an already desensitized one. I had a root canal done on a molar and a crown put on it, and I can well see myself asking a dentist to make a new one with a neodymium magnet in it to replace it.

I think a better location would be a tooth.

I am interested and have some dental UV cure resin… but my hunch is this - the magnet in the tragus makes sound because it is able to easily move and cause movement in the surrounding tissue which is through friction… meaning the tissue is not tied to the magnet and does not necessarily contribute directly to its inertia. Put another way, gluing a magnet to a tooth does not allow the magnet to move at all unless it’s also moving the tooth. The tooth + magnet together create a huge amount of inertia which must be overcome to generate movement… it would be like if your cochlea would be glued to your skull… it kinda needs to float freely to vibrate properly… so maybe a magnet encased in a low durometer silicone elastomer that one side was then glued to your tooth … something like that might work. But… who knows… maybe a magnet just literally glued to a tooth could also work… hard to say without testing. My hunch though is the best approach would probably be to put a magnet inside of a titanium casing with only a thin airless vacuum space… so like 0.05mm between magnet surface and titanium shell… enough room for the magnet itself to vibrate and bang against the titanium shell with greater force (due to momentum) than the field itself could affect on the tooth alone if glued directly to it.

Actually… shit… there are dental implant base mounts (screw into the jawbone directly) that have magnets on the ends. I have some in my desk for a project I worked on a couple years ago. They are used for dentures usually so the dentures or large bridges with many teeth can “click” into place and be easily removed… it would be interesting to find someone with these and toss a loop coil around their neck and see if they hear anything.

For whatever reason I love mixing together badly constructed Spanglish phrases. It just sounds funny to me, and if you’ve ever seen any Spanish language dramas, you’ll know adding just …

Put another way, gluing a magnet to a tooth does not allow the magnet to move at all unless it’s also moving the tooth. The tooth + magnet together create a huge amount of inertia which must be overcome to generate movement…

In the case of the magnet glued on a tooth, the less movement of either, the better. Dampening and inertia are only a problem if the magnet+tooth+jawbone assembly is loose. You can test it with an electric toothbrush: ram the plastic part of the brush hard on a tooth and it’ll give you an earful. Loosen the contact a bit and the sound diminishes.

Tragus implants probably work well enough because they’re so close to the ear canal. But the implantation site in semi-soft tissue makes them less ideal than, say, stuck to the cranial bone behind the ear.

Sorry I didn’t make my point well enough… it’s not about compression it’s about force applied… a small magnet glued to a larger mass means it’s like a woofer… it requires a lot of magnetic field power to move it at all (vibration) and the frequency response is shit… so low frequencies only… if you let the magnet float a bit but the vibrations propagate easily to the tooth… then it has far less inertia, can easily move with much less magnetic field force required, and has a much better frequency response… more like a mid-range speaker or tweeter.

What if you put a magnet in a hollowed out tooth, and put that in?

Or something similar to that.

Well, at some point you try to upgrade a human body that wasn’t designed for that sort of shenanigans. There’s bound to be some design limitations, as you well know

One of the limitations is for us average hobbyists to be able to upgrade ourselves without the help of research of medical professionals. That means ordinary, fully abled people are limited to glass implants that don’t interact with anything in the body (save perhape the Bio-Thermo chip in a very limited sense), sticking magnets in traguses (tragi?) or gluing stuff to teeth.

Ideally you’d want neural interfacing, but no doctor will implant you a cochlear implant if you’re not profoundly deaf. So magnets it’ll have to be for us…

Well written, good read, and quite an ordeal

So, teeth magnets. What about a single tooth denture with a magnet. Maybe someone who makes grills can make one with some cyborg collaboration?

I do like where this discussion is going… instead of the investment in time/effort for the dental cement method, why not see if it works at all by gently biting down on a magnet, and see if the vibrations make it into one’s skull? If I had a neckloop & the little magnets, I’d post up results right now. I’ll probably purchase one just for this test, unless someone beats me to it.

Been feeling up my jaw today, and have not noticed a layer, or big layer of muscle along my jawbone.

Why not just line up one or a few magnets along the bone? It can rattle against it.