What to buy as an Apple user?

Yes, i am one of these guys who got their home full of Apple stuff…
Next week Patrick Kramer is putting xEM and xNT in my hands, so i need some recommendations for stuff to buy

Stuff that is around:

As i`m not got in electronic stuff and building it, a kit wouldnt be the best idea for me. A ready to use solution would be great!

No Apple users around to give advice and hints?

There are definitely readers for Mac- @amal demonstrates unlocking an iMac in the promo video. The iPhone X can read NFC tags with an app. Simpler readers just read the UID and enter it like a keyboard, so they’re probably universal.

To protect the xNT, you need to use an Android and Dangerous NFC. It locks the memory pages to read-write, locks the lockbytes themselves to read-only, and sets a password. The device in your hand is the one you really don’t want to brick

AFAIK, most cloners for the xEM set a password, unique to that cloner.

A phone would only be able to write to the xNT- it’s a 13.56Mhz NFC tag. It has an unchangable UID and can store data records. For example, mine has contact info on it, which Android can automatically import.

The xEM is 125 Khz and has a UID that can be changed, but it doesn’t store data. For example, you could use a cloner to clone an apartment access card to it.

@son_of_a_diddley nailed it, its not that apple devices cant read NFC, Its that if you want to not unlock your phone and get the advanced features and read other types of NFC tags, apple has made that choice for you and its a “you cant” they also make it more difficult then android for developers to work with the NFC within the device. as a fellow implantie and mobile developer let me break some of these things down roughly to what I know thus far (i may be wrong on a few of these points but I basically have given up NFC on apple because I value my sanity)

but this is not "stand alone support for nfc + the macbook

well crap… huh looks like you can only write with this $1000 phone… garbage now in terms of nfc right? well no… if you have gone 100% apple and have giving them full control of your house take a look at

I didn’t make this app and have not tried it but would be nice thing if you have gone all out with apple.

and I could not of said the just of things better then @son_of_a_diddley :

To protect the xNT, you need to use an Android and Dangerous NFC. It locks the memory pages to read-write, locks the lockbytes themselves to read-only, and sets a password. The device in your hand is the one you really don’t want to brick

AFAIK, most cloners for the xEM set a password, unique to that cloner.

A phone would only be able to write to the xNT- it’s a 13.56Mhz NFC tag. It has an unchangable UID and can store data records. For example, mine has contact info on it, which Android can automatically import.

The xEM is 125 Khz and has a UID that can be changed, but it doesn’t store data. For example, you could use a cloner to clone an apartment access card to it.

sooo that all said:

Or would be the easiest way to buy an old Samsung Galaxy s5 and use this phone for writing on the xEM/xNT?

At the end of the day, yes this really is the best way to go. I don’t like Samsung either (at least apple doesn’t have bloatware on their devices), but it does what you need it to do especially if its not your primary phone.

and hey good luck with the implanting and welcome to the group of us who have implanted themselves! any more questions feel free to ask here

You can unlock your macbook air with the acr122u reader. There is a software for iOS for the reader - but I wasn’t able to install it. At the app store on your computer there is an app called NFC Ideas.

In the end of february we will get an apple store in Vienna. I will go there with my macbook and the reader, maybe they can install it.

Maybe you can get a cheap android phone for writing. My Samsung S8+ works also perfect with my macbook

Thank you very very much people!
My plan is to get an old Samsung Galaxy S5 and buy a reader for my macbook to mess around with the unlock. Probably i will be busy for a couple of days after i bought all the stuff

Alright.
Since one week i’m playing around with a 2nd hand Galaxy S5. Yes, buying a cheap Android phone was def the right decision! 30 bucks for an old phone and no headaches with the Iphone.
I think i found everything i wanted in the NFC apps i bought in the play store (Smart NFC Pro 1€ / NFC Tools Pro 3€). Messing around with the unlock screen which makes photos is quite fun. BUT, it sucks bollocks to unlock the Galaxy S5 with the implant. I literally have to look for the correct spot to scan my xNT really hard, takes sometimes up ti 10sec… Even my Iphone X is waaaaay faster with activating the implant, don’t even have to touch the skin with the phone. Anyway, as i don’t use the S5 as my actual mobile phone it is a luxury problem and will be solved when i step up to S8 or the new S9.

Unlocking my macbook with the Dangerous Things USB Reader and the UID is decent. If you know where the best spot on the reader is, quite cool.
But is there a tool for mac where i can activate tasks like the android apps? Just found videos where people try to use it with Java.

Next step, buy a reader/writer for my xEM

Do you have the Smart Pass Lock?
Important: the App is sometimes a bit buggy - please activate also the alternative passwort.
After a update , I wasn’t able to unlock my phone - it works after several trys with the passwort and the settings. I refused to make a new system update.

I have the Galaxy S8+

Yeah, i installed it but like you sad - buggy as fuck and fkin pop up commercials are pissing me off pretty bad. So the app was dumped, not even fun to use it.

I think it is easier to write on Facebook

What would be the lowest grade of android that would be usable to set up a chip? I really dont want to spend much as i won’t be using it for anything other than setting things up.

You didn’t say which tag you’re planning to use, but I’m going to assume you’re interested in the xNT. Two things to consider when searching for the minimum phone spec to meet your need:

1} Android version
You should use the Dangerous Things app to put some of the tags memory into read-only mode (always wear protection). To do that you need a phone with a version of the Android operating system that is compatible with the DT app. I scanned the DT app with AppChecker and found that the target version is KitKat, but it will work on any version. 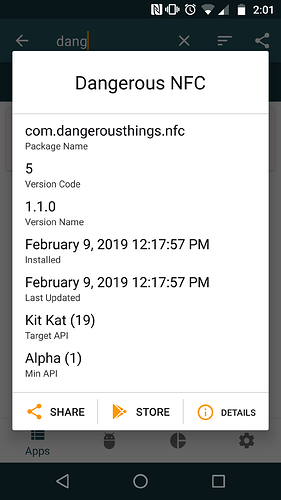 2} NFC capability
The phone also needs to have an NFC antenna AND firmware that supports it. Some of the cheap “factory unlocked” phones I’ve purchased on eBay are specc’d to support NFC, but something they did during the unlock process disabled it.

You could probably go to a physical store and test out the phones there. Otherwise just make sure you order an OEM phone that has NFC listed as one of it’s communication methods on phonearena.

I have acquired a Samsung S5, i am hoping that will be able to do the things needed? I was going to be using a NFC chip

Thanks for all the info!

Hi @Void
I notice you have had luck with the S5. I just was given a working S5 and when i scan an NFC Mifare chip (my pass card) it picks it up but say that it is an incompatible chip???
Do you think the S5 is a fault, or is it perhaps something else?
Eager to hear more about how you did with your S5

What app are you using to scan @cybernordic ?

I was just using the base phone to detect, and it spotted them saying “NFC tag not supported”.

NFC Tools brings up data saying my card is a Mifare 1k, but says the phone is not compatible.

Thinking i might need to find a different 2nd-hand android ?