Hi guys, I just wanted to say upfront that I’m new here and this is my first post. I’ve got an xNT and an xG3 already and 3 days ago the XSIID joined the crew. It is located between my 3rd and 4th metacarpals. It is very close to the surface and I get a nice read distance of nearly 1cm. Unfortunately I can’t see the LED at all, not even in a pitch black room. I nearly had a heart attack when I read it with NFC Tools and it said it was an NTAG220, I was afraid that the implant might have gotten mixed up with another until I read here that you should read it with TagInfo, which I did and it is the right tag. I’m afraid the LED might be broken or something. Does anybody here have a clue to what might be going on?

EDIT: It’s the blue one btw.

3 days ago the XSIID joined the crew…Unfortunately I can’t see the LED at all, not even in a pitch black room.

I would suggest, you just give it a few more days, for the extra fluid to dissipate, and THEN if no luck, use the floaty orange button on the DT store 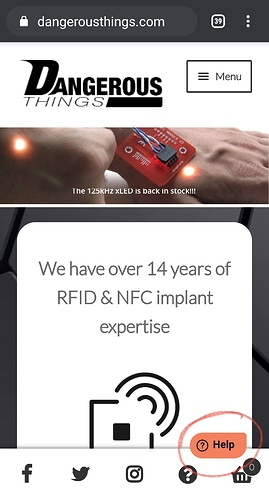 It is located between my 3rd and 4th metacarpals.

Mine was like that slightly. Right after install, I could see it clear as day under the tegaderm.

The next morning, I could read it, but not see it.

A few days later I tried again and it was bright again.

I only tried it right after the installation with the bandage on and I thought I couldn’t see it because of the bandage. Did you try without or with a bandage?

I had a clear film tegaderm in. I don’t think it would be very visible under a regular bandage

Hmmm yeah, I hope I’ll see it in a few days

Do you have a more powerful reader than your phone, like a USB reader? I bet that will make it show up.

There’s also the possibility that it’s flooped around and the LED is pointing down. It doesn’t really matter because the light still diffuses through your skin no matter which direction you point it, but with the blue and amber xSIIDs specifically it will appear less bright. I wouldn’t physically mess with it right now because the tissue is still trying to heal, but in like a month when it’s settled you could try and wiggle it around if that’s the case.

I’ve got an RC522 for my Raspberry Pi but the Pi isn’t setup right now, I’ll set it up tomorrow and try it if I have some time to spare.

We’ll see in a month, thanks

I quickly setup my Pi with the RC522 just now and tried, I get a read but no LED. Then again, I tested the readers strength with an xLED and it seem actually weeker then any phone I’ve ever seen

I didn’t expect much from such a cheap reader anyways

It works! For some reason it went from not visible to bright in about 30-60min. I hope this topic will help others with new XSIIDs that panic like I did

Some people have taken literally days and days (10-14 days) for the LED to become visible. This is from pooled blood usually.

Wow I am literally in the exact same situation as you. Injected in-between metacarpals in my hand and getting perfectly fine reads. We even have the same color LED. I installed it 4 days ago and tested it today with both my phone and the NFC wedge reader sold here. I even took apart the wedge reader to make sure I had as much open space as possible to see the light when it was read and can’t see any light whatsoever. Glad to hear I just need to wait a bit more.

Now for the glamour photos

For some reason it got darker over night again, you can still easily see it tho. I’ll take same pics later

The human body is a weird thing, huh? People have old injuries randomly flare up when they’ve been pain free for months or years, blood and fluids pool then drain, things swell, and all of have different bodily reactions.

Kinda cool, kinda a bitch, but good to know the LED is working and now it’s just a waiting game to get to full brightness! 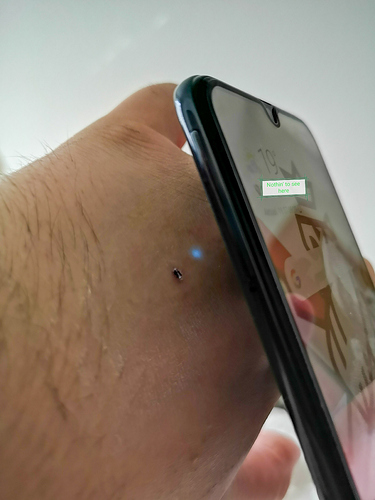 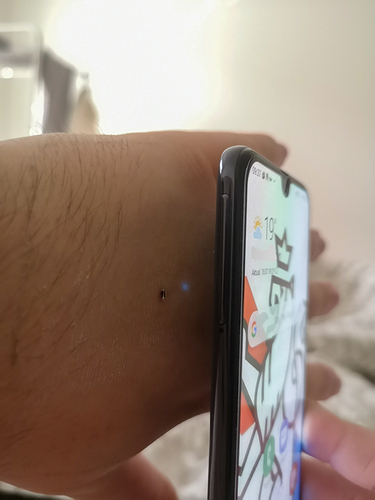 Awesome mate, I’m glad you waited it out

My hunch now is that there might be a blood vessel that’s slippy sloppy over the xSIID… can you notice a difference if you poke at it while lighted?

I just checked. There doesn’t seem to be a blood vessel slippy slopping over the implant. The LED doesn’t change brightness when moving the skin while it’s lit. There used to be a blood vessel 1cm further towards my fingers then the LED is right now, but it got hit while installing. It looks and feels like the implant is right under the skin. I guess it was just fluid build up, maybe a little bit of swelling. I might have accidentaly turned and slept on my hand or something.