Many moons ago, when I worked in a Network Operations environment in a large global FinTech provider, we used to Hasselhoff anyone who left their terminal unlocked when they stepped away. Hasselhoffing someone is as easy as opening a browser on their unlocked terminal, using a search engine to pull up some gaudy picture of David Hasselhoff and right-clicking and selecting “Set as Desktop Background…”. Close the browser to cover your nefarious tracks.

When the unsuspecting coworker comes back to their terminal, they likely won’t notice the new desktop until they log out, or log in again. There’s as good chance of some laughter in the room when it happens.

In this case here, I couldn’t access your unlocked terminal, so this will have to do… 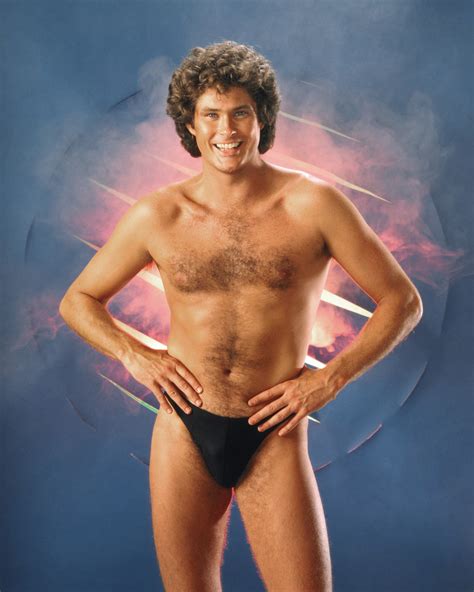 That is exactly why I put a pcProx Sonar and that foot-implant-operated RFID reader under my desk (and I plan on sticking one in my desk chair too): the sonar locks my session as soon as I leave my desk, and the RFID reader (foot or butt) makes logging back in seamless.

I leave my desk like 30 times a day, and the forgot-to-lock-the-session jokes get tiring fast - and the logging back in too, if the session is locked. Hence… RFID to the rescue.

At least a Hasselhoff image (or Rick Astley or whatever) is mildly funny. My stupid coworkers invert the display (messing up the desktop icons) or send lewd emails with your account…

Settle down round here you young whippersnappers and let grandpappy tell you the tale of his role in the great prank war of 2009.

At the time I was working as a machinist for an aerospace outfit that rebuilds and remanufactures a variety of aviation parts. Cool job, loved it.

I worked with, or at least near, this guy. Young kid, not too bright. The kind of person who thinks videos of people getting hit in the nuts with a football is the height of comedy, and who would play something like that on a loop and get more jazzed with each replay. I mostly ignored this person.

Somehow, this guy found a series of “Prank War” videos on youtube, and became enamored of the idea of starting a prank war at our work. Oh, the fun, as HE imagined it. Nobody wanted to play, imagine that.

Young guy followed our boss around like a puppy, and I didn’t really get along well with the boss, O.K, actually the worst boss I’ve ever had in my whole life. Because of this dynamic, young guy decides to force start a prank war with me. All he has to do is prank me good enough that I’m forced to reply, right?

Apparently I missed several attempts. For ex, wheel weights were put on my tires to make them vibrate. If you ever see my cars, you’ll know that vibration is just proof that the tires are still attached. I never even noticed.

My workspace had this great big slab of butcher block on it. In beautiful condition because I wouldn’t let people drill things on top of it and that sort of thing. I also had some personal items on display there, just knickknacks that I liked. I come in to work one morning to find that a bunch of my stuff has been messed with, and a miniature anvil that I had was now screwed down into the wood in the center of my desk. It was a gift from my Mother. He’d broken it.

I knew he thought it was funny, and I also knew that I’d have to show him, painfully so, that it wasn’t or this was just gonna keep happening. So I hatched a plan.

Like a lot of younger guys, he took a great deal of pride in his truck. A 1983 two-tone Chevy half ton to be exact. It was well kept, and apart from some gaudy rims, and an over powered stereo, beautiful. It was certainly the nicest thing he owned.

Come lunch time, I headed down to the local Wal-Mart, and procured a bottle of Jovan Musk for Women. In case you don’t know, that’s an overpoweringly strong perfume that is mostly marketed to ancient old ladies with no sense of smell remaining. It comes in a whopping great big glass bottle with a pump/squirt spray nozzle on it. It’s literally a bulk bottle of old lady smell.

Back in the workplace parking lot, I carefully pried the crimped metal off the glass bottle and pulled the pump out, being careful not to get any of this noxious stuff on me. I then proceeded to pour the entire bottle carefully into the fresh air vent just between the hood and windshield of his truck.

Did I mention it was a sunny day? 95 degrees and not a cloud in sight. Windows were rolled up too. Musta been 125+ degrees in there.

At the end of the day I made sure to get clocked out as early as I could and out of the building. Just walking into the parking lot it kinda hit you in the face. Even at a distance.

He never once mentioned it. He quit screwing with my stuff. And… He didn’t roll the windows up for two weeks straight. You could smell it outside his truck for months after. From a distance. Apparently all the volatiles in the musk soaked right into the upholstery.

He never once mentioned it.

He was afraid at that point. He didn’t want to poke the bear.

The favorite joke in the workshop I worked at for 3 years was pouring graphite in people’s shoes in the locker room. You’d come in the morning, put your shoes on, and the graphite would slowly creep up your body under your clothes throughout the day. By the end of the day, your entire body would be soot-black. And the worst thing is, it’s IMPOSSIBLE to get off and it stains your skin for 3 weeks afterwards - and you can throw away your shoes and your clothes afterwards.

Someone did that to me once. I found out who it was and I went Ender on him. Never happened again.

I like the pure simplicity of taking a screen shot of the desktop and making it the wallpaper.