So, I decided to take my cheap Walmart keypad safe (~$50 IIRC), and convert it to HF RFID/NFC. I decided to do this as cheaply as possible, with the goal being to spend $0 on it if I could. I have a plethora of Arduino components from over the years, so I figured I could make it happen. This is why I chose the name, the all-compromises build. The opposite of a no-compromises build, I was willing to cut as many corners as necessary to get it working for “free”. My only goals were to have it work well enough to use daily or for demo use, as well as providing enough security to still use it as a dorm safe. If you were buying every component from China via eBay or Aliexpress (not counting the safe), it would cost less than $8-9 in total. Of course, you would already need to own a soldering iron.

I also had to do everything in a dorm room, so I was a bit limited on resources. Mainly, I was limited on tools (couldn’t use my hot air station, too much of a fire hazard). I got away with using my soldering iron by making a crappy solder fume extractor, via a T-shirt over the back of a large fan. I also only had one color of solid core wire, which made things much more annoying.

I ripped open the back, and found that the safe simply had a solenoid activated by the original microcontroller, which had a ribbon cable going through a small slot, connecting it to the keypad. The keypad was just held on with strong adhesive, and popped off rather easily by pushing through the ribbon cable slot.

I decided to go with a $2 chinese Arduino Uno with a PN532 as the core of the build, attaching it to the safe solenoid via an N-channel MOSFET that I harvested from a cheap USB rechargeable blender. I needed a way to drive the solenoid somehow, and the Uno itself couldn’t provide enough current (plus the solenoid wanted 6 volts). Since I couldn’t use my hot air reflow station and the back of the MOSFET was soldered on, I decided to just cut the blender board around it. I also added a 210 ohm resistor to the gate connection to stop it from drawing too much current from the Arduino.

Thankfully the battery holder for the safe has 4 AAs in series, and an Uno can handle 6V just fine.

The PN532 I got cheaply from eBay years ago, and it had been abused a lot at hackathons. The SCL pad was ripped right off, so I had to bypass the trace. This is why there’s a single wire in the center.

Here are some photos from the project, and a video of it in operation.

IMG_20201005_0015553991184×888 259 KB
It’s hard to tell, but the PN532 actually sits nice and flush here. At some point I’ll probably print out a sticker or something to cover the reader, but I kind of like the barebones look. The reader is on the other side of the metal, with only a small slot to run wires through. Shouldn’t compromise security a ton, besides giving someone access to the I2C pins. Again, for a dorm safe, should be just fine. 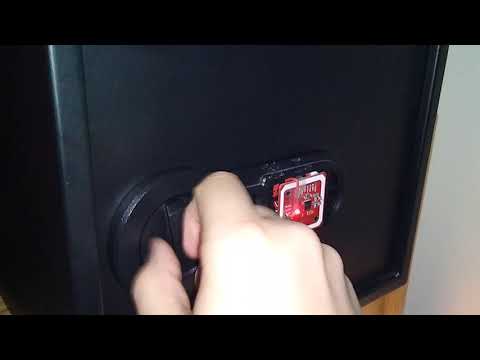 YouTube Video of unlocking it. I set it to lock after 3 seconds, plenty of time to open the door before it relocks.

Source code link:
GitHub project
The code is super simple, mostly just from examples in the Adafruit PN532 library. Still, figured it could help some people who don’t know where to start on their own project. It was written quickly, as I did the whole project in one evening. Yes, I changed the UIDs in the uploaded version to keep my hand UIDs secret. Eventually I’ll throw a simple wiring diagram on the same GitHub project.

Thanks for reading my long write-up, and apologies for any mistakes (it’s my first project write-up haha). Hopefully I didn’t forget any info

print out a sticker

apologies for any mistakes (it’s my first project write-up

What’s not to love

Haha, hadn’t thought of using the DT sticker. I compared it, sadly it’s way too large, to the point where it would basically just be the inner D with random black edges. Can’t figure out a good way to cut it down. Either way I’m 100% throwing one on the safe next to the reader

Might attempt to use the Vivokey sticker, I think that one would trim down better due to the design. Hopefully when I get home I can 3D print a little blanking plate, but I’m worried it’ll be too thick and block reads. Might try making 2 small blocks to straddle each side of the reader, making it flat enough to put a sticker across the entire front. Just 2 layers of electrical tape was enough to block consistent reads on my xSIID, that was my first attempt to cover the reader. Don’t know how to make a sticker myself that looks good, since the surface isn’t very flat. The reader sits flush in the center, but the sides dip down a ton, with a grid underneath.

Where have you stuck yours

Sticker placement from Ultron Kit - Spark VivoKey and DangerousThings.com sticker I put these stickers on my car but it required me to trim them down to reduce the white border. Maybe future versions of the background should be clear so this type of surgery isn’t necessary? Just a suggestion; nevertheless, I am proudly displaying these on my Fiat 500 Abarth [20200610_202634] [20200610_230127]

making it flat enough to put a sticker across the entire front.

Food for thought, but that backup key… you should tweak/fix/remove it

Yeah, I plan on removing it pretty quickly once I get some money (spent it all on the implants haha). I don’t know the power drain of this yet, or if any of my solder joints are gonna end up randomly failing, so I still want backup capability for the moment. Gonna try and find a better cylinder that fits without too much modification. Again though, it’s a safe for my dorm room, atm it’s just holding some personal documents in case my college needs them, sentimental items, and a few “safety concerns” (mainly just a few pocket knives haha, I’m allowed to have them here, but I still don’t want to leave them out). It thankfully just needs to stop grab and dash type thieves.

I at least threw back on the crappy blanking cover for the keyhole. What cheap wafer lock? Out of sight out of mind

I do plan on actually replacing it when monetarily possible though.

Yea I hear you on power concerns,
The LF for my big gun safe draws some power
(Or I wired it in a very inefficient manner)
Have a little 6000ma ups battery wired in (safe normally has ac power)
The XACv2 will drain it in 2 days

Now that I finished my full size gun safe I’m looking at my small bedroom safe, and it’s gunna be weirder
Because it doesn’t use a solenoid but rather a motor that drives the bars in and out, I think it will be ok though based on how it’s laid out

Oh wow, that’s a lot of drain. It looks like mine might die at a similar speed, judging by the datasheets for the PN532 and the 328P. There’s a way to soft power down the PN532, but it would be a bit annoying to have to press a button to wake it up. Might try and add a wall adapter tomorrow, I’ve probably got a 6V power supply somewhere.

EDIT: Think I’ll try just wiring in a USB cable in a few hours (when my roommate wakes up…), and adding a battery switch. Hopefully 5V is enough to drive the solenoid, if not I’ll have find a different way to power it. USB would definitely be the most convenient, though.

EDIT #2: Did a quick test by hooking a USB cable to a powerbank and just shoving the VCC and GND to the battery contacts. Ran great off of 5v, opened and closed repeatedly without issues. This could be a great power option for DIY RFID bedroom safes. Going to solder one in permanently later today, once I don’t have to worry about waking my roommate with the smell of solder…

Just got a USB cable wired in, working great now. I chopped the end off of a spare mini USB cable I had lying around, it was the only USB cable of decent length I have in my dorm. It’s a pretty small current draw, if I had to estimate I would say ~250mA max, likely closer to 150mA. I found conflicting info for the PN532 board I’m using, and it would be a bit tricky for me to get an accurate current measurement, would have to desolder a ton of wires (I have multiple wires all tied together for my positive side). It’s low enough to never cause issues being plugged in, and I can also power it by a cheap 1 amp power bank if I want to use it for a demo (without running down 4 AAs for no reason). The safe already had a few very small holes for locking cables in different positions, and I had one free to just pass the cable through.