Hey y’all!
So I implanted my NExT chip about a week and a half ago now, things are healing up well I believe despite my paranoia about poor placement and whatnot detailed in a previous post (surprisingly, the splint seems to be helping).

Anyways, now that the initial healing process is almost over-- same with the “I told you so” phase of things possibly going wrong-- I am thinking now is the time to break the news to my family (whom I live with, as a college student). In the past I have tried to involve them in the decision to implant and for the last 6 months have been trying to get them to realize I am serious about it, but they have shown disinterest outside of telling me to stop considering it.
With their knee-jerk reaction being a strong “NO,” are there some particularly strong selling points for chips? I am thinking of making the “x-thousands of chips installed with no problems” argument but don’t have the exact numbers; medically I would like to prove that it is relatively safe, but having no medical background of my own, am not sure how to go about this. I’ve already basically justified the uses I have for it, but more than the obvious “door locks, car lock, computer passkey, sharing to phones” would be welcomed.
Amal has been super awesome and responsive to me bugging him on IG, and has provided some good talking points-- along the lines of single entry vs entry and exit (as it would be in a full piercing), as well as the longevity of his own chips.

Any tips or advice would be greatly appreciated!

Why say anything? I never kiss and tell…

I don’t mean to be rude, but if you need their approval, or justify your choices, you need a new family.

Earlier today, I went through this exact tough process. My parents didn’t take it well, but I was able to calm them down by throwing together a little arduino thing to show off the implant. I think that some people, my parents included, will never be 100% on board with biohacking in general, but it is possible to get them used to the fact that you are “chipped” and for them to recognize the benefits that RFID technology has.

That is, unless your last name is Albrecht.

Oh… parents. Sorry I thought you meant the kind of family you can hire a divorce lawyer for

I wouldn’t, it’s just that I want to get back to blacksmithing with my father but still have to wait a bit before I can fully use my hand

I also REALLY want to share this news on Facebook soon-- hopefully get some more people into the realm of chipping/ biohacking or at least make then realize it’s not 100% crazy people that do it… only partially crazy people.
But also, I’m afraid with the injection site still looking like I stabbed my hand with a needle (the dried pooled blood just fell out today and I’m hoping this is normal healing?? Still looks like a hole) plus my recent mention of it, they might figure it out before I could tell them. Also honest, yada yada yada…

I find that bringing up pet microchips and contraceptive implants as a great example of safety that’s natural for people to think about.

Hmm, actually, if it doesn’t really show, why tell your parents at all, if you’re that concerned about rejection? You can always say you drove a nail through your hand or something, and that’ll be the end of it.

Let it fully heal, use it for a while.

“Oh yeah, I meant to tell you, I got this ages ago, I have been using it to Do X Y and Z,yeah there are thousands of people using them. So much more secure than a key and you cant loose it, Its been great, you should get one.
Heres why”

If you haven’t seen this it seems relevant

there are so many people out there who have plenty of things to say when they find out you have a chip. everything from “the government is going to track you!” to “it’s the mark of the beast!” and i’ve seen so many good responses to that. my favorites are @amal’s “the mark of the beast goes in your right hand, so we encourage customers to put it in their left.” or things as simple as “your phone tracks you 100 times more than an nfc chip would”. what are your favorite things to say when people…

I think that some people, my parents included, will never be 100% on board with biohacking in general,

This makes sense from a protective standpoint; they’re also inherently older than us, and not to lump parents into a huge stereotype but not having grown up in the technologically-experimental culture that we are in today, I’m sure there’s some fear around putting any sort of chip in one’s body-- especially if that person is their child.

it is possible to get them used to the fact that you are “chipped” and for them to recognize the benefits that RFID technology has.

I’m probably going to go for this approach; I’ve already completed a few projects just using the NFC side of the chip, such as creating my own fraternity-specific business card that opens in a web link when scanned (for use at fraternity recruitment functions), as well as work and school-specific ones. Also planning on cloning my school ID to the LF side, so that I can open all of the doors with a wave of my hand.

they might figure it out before I could tell them. Also honest, yada yada yada…

You cant argue with that.

This is really bad advice
BUT
Have you ever heard the saying. 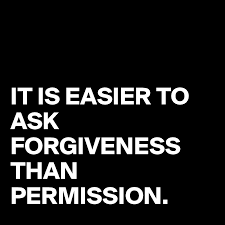 Let it fully heal, use it for a while.

In an ideal world, yes, but I’m visiting them in 2 days and there are a ton of hand-intensive projects I’d like to get started on… chopping wood, blacksmithing (we just got a new forge so this one is going to be hard to get out of), basically physical labor, and if I wait longer I know they’ll be pretty hurt by making other excuses not to do things, as opposed to telling them outright.

In hindsight I should’ve waited to go back to school, but I’m impatient…

Oh, you mean my life motto? Making ill-advised choices and then asking forgiveness is my THING!
I tried asking permission (or basically stating I was going to do it and no one believing me), now I will ask for forgiveness… the way I see it, I’m no longer a minor and it impacts them in no way. I guess they could pay for a surgeon to take it out and refund me if they wanted, but I’d just get another one (XSIID finally?) later.

It obviously depends on the type of relationship you have with them but if my mother gets upset about something I reminded her I’m an adult and that I made my own informed choice and point out that she would likely prefer a relationship where I feel like I can be open with her about my choices and that by choosing to tell her I am trusting her to respect those choices.

she would likely prefer a relationship where I feel like I can be open with her about my choices and that by choosing to tell her I am trusting her to respect those choices.

Well said. Being away at college, I’ve made adult decisions and told them later, so hopefully they’ll understand that this was with my interests in mind, and that I could’ve very well not told them at all.

Plus, I’m not even breaking the law this time.

When I decided to ditch the shoes 20 years ago, my mother didn’t talk to me for 3 weeks - and then proceeded to give me an earful about how she was ashamed to be seen next to a fucking hobo each and every time I visited her for a full year after. The implant went much easier:

“Well now, you’re an adult ain’t you?” she replied. “You got gray hair, you do what you want after all. What do I have to say about your choices at your age.”

I was stunned. “Really mom. You let that slide like that? Remember the shit you gave me when I started going barefoot? That didn’t even involve any injection or nothing drastic. Seriously? I was well into adulthood back then too. So what gives?”

“Yeah” she said “but that was visible. Your implant thing? Well you still look normal.”

not even breaking the law this time.

LOL that’s another way to defend it

“but that was visible. Your implant thing? Well you still look normal.”

Wow, that’s crazy! I can think of a lot more things going wrong (or at least arguments that the uninformed masses would make against) with a chip implant than going barefoot (glass, athlete’s foot…? I guess?). Sometimes parents say the darnedest things.
I’ve always had a hard time reading how my family will react to my decisions-- most recently, I bought a moped and they threatened to pull me out of college. So I’m a bit nervous about telling them I performed minor surgery on myself and now have a chip in my hand permanently (in their eyes).
Then again, they laughed off me buzzing my hair and dying it hot pink, then blue, then purple, then pink again for like a year… side note, totally worth it, got all of the ladies and I think I peaked in 8th grade.

Athlete’s foot is something only shod feet get.

As for glass, I think the only time I ever got a shard in my foot was when I broke a bottle on the floor at home and didn’t vacuum for floor well enough. Otherwise, I can confidently say I have more glass in my hands now than I’ll ever get in my feet - thanks in large part to DT