Started this project last night. All of the parts have arrived except for the iclass readers which haven’t shipped yet.

First off, huge props to Compgeek for turning me on to the Wemos D1 Mini. This project will be based on that board. Super small, low power draw, and more power than I’ll ever need for this project.

I chose to go with the iclass SE because my xEM is flashed often for various purposes. However, the xNT UID always stays the same. So basing my scanners on 13.56. My previous AWID project was more a research project that an actual use case.

The code from the previous project was very easy to change for the Wemos D1 board. The biggest changes were using the correct 8266WiFi.h file, and I had a few competing files of the same name. Also, the pins are referred to in a different number scheme, so I had to convert the INPUT/OUTPUT pins to use the Wemos constants of D2 and D3 instead of 2 and 3. And a few tiny changes like the way functions return values.

Many products were purchased in multi packs, so the price breakdown per unit is $33 not counting the cable as the price differs greatly based on length needed. $22 of that going to the used iclass SE.

There are a wide variety of Chinesium 14443a compliant scanners. However, in addition to reviews stating poor range, the cables are not shielded and there isn’t even a shield wire. So I paid the few dollars more(literally $4 more) for the used iclass SE.

The readers will have the best range with the higher voltages. So the reader will be powered off the full 12v from the wall wart, and the Wemos will be powered off the adjustable buck driver. I spent more on the adjustable buck drivers because it’s a multipack, and the left over units are much more useful with the wider range of input and output voltages, and they are more efficient. Could have saved a few dollars going with the cheap 12v to 5v linear buck converters.

The readers will be placed outside at the 2 doors. My house was built in 1958, so there is only 1 outdoor electrical outlet. But I do have a basement with direct access to the 2 locations. So the Wemos will be in the basement, and the shielded cable will be ran out to the readers. Since the cable runs will be roughly 10ft, I feel a lot more confident using shielded cable.

Much like my previous AWID project, this project connects to my IoT wifi network and passes MQTT messages to Home Assistant. The biggest change to this project is that the Wemos are programmable over the network. So I added the code to allow for network flashing for ease of upgrades. With the new Wemos boards, I’m already experiencing massive performance gains. With the aged Duemilanove, it took about 15 seconds to boot, connect to wifi, then connect to MQTT. This new board does the same in 2 seconds.

Hopefully, the next post will be a success with a demo as I believe all I have to do is swap out the AWID reader for the iclass reader. But if not, it will be more of a build log.

Glad you’re loving the D1 and it’s performing well for you, and also a great write up,

Would you consider sharing your arduino sketch? I’m not sure how many people will find it applicable to their needs, but would be a great reference.

Sure thing. Let me add some code comments and edit out personal information.

The 1 catch with the code is that it stores UIDs hardcoded, which isn’t a big deal with network flashing, but I’d really love to eventually work out EEPROM storage.

Here’s my code. Keep in mind I’m a Linux Sysadmin, recently converted to SRE. So coding is well outside my area of expertise. Advise and constructive criticism is always welcome! The follwing libraries are needed:
YetAnotherWiegandLibrary (I’m using polling, but it also supports interrupts)
PubSubClient (MQTT)
Official Arduino Wemos libraries

The official PUbSubClient has a call to client.loop(); in the Loop function. This keeps the connection alive and checks for new messages that are subscribed to.

However, this function was locking out the wiegand listener. AND it hammered the MQTT broker with traffic. Official documentation says to add a sleep function in Loop. This doesn’t work as I need to constantly monitor the Wiegand listener. Since this device does not subscribe to any messages from the broker, nor is the connection required to stay open, I removed the call to client.loop and simply reconnect when a message needs to be published. Side effects are that it introduces about 50ms delay if the connection to MQTT has dropped. I can live with that.

Also, this Wiegand library strips parity bits, so the HEX UIDs coming in were not matching what Proxmark was showingme. Setting false in
wiegand.begin(Wiegand::LENGTH_ANY, false);
Stops the stripping of parity bits. I do not know if this is necessary with the iclass SE, but will find out when they arrive. It certainly was necessary with the AWID/PROX reader.

Thanks! Very clean and well commented, and I love the inclusion of serial debugging.

Love the wifi name and password you used haha

Awesome! If you get a chance to show a hardware demo with wiring that would be great info too.

I will as soon as the 13.56 readers arrive. If you’d like, here’s a video of my other project using a 125 reader. This project is more a less an upgrade of that project. More details and wiring schematics will be included in this build log when the final parts arrive.

Here’s the wiring drawing. A little sloppy as I’ve never used Fritzing before.

Wall wart is supplying 12v to the bottom rail. Buck converter drops it to 5v and powers the top rail.

Wemos is powered off of the 5v rail.

Wires up MUCH cleaner than using an Arduino + 8266 + voltage dividers. 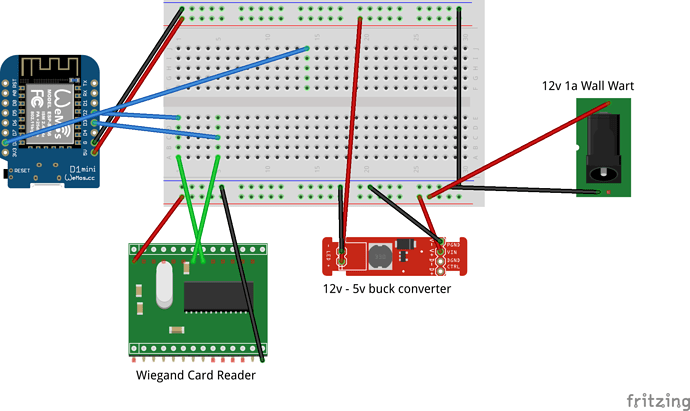 Great stuff! One more ‘this is a product’ suggestion, you can get a ‘power shield’ for the D1 - not any better than what you’re using, but it is the same footprint as the D1 and stacks nicely, and they also have a relay shield for if you did decide to drive an output directly.

Appreciate it. This will be 100% hard soldered. Breadboard just for prototyping and to help electronics noobs. I have a few relays, but no use for them yet as it’s easier to control from Home Assistant.

Having it work now, sort of. Ran into a few problems. For some reason, D2 and D3 just would not pick up the Wiegand data signals. Switching them over to D5 and D6 fixed that and wasted a frustrating amount of time.

And now the bigger problem, the data being read does not match what’s on the chip. Here’s a random magic 1k fob I have lying around according to taginfo:

But the Wiegand library is reversing it while keeping the HEX character in the proper order and giving me the following output:

Trying a fob with a 7bit UID

gives me the following:

Going to take a lot of hammering unless someone has Wiegand coding experience.

Is it the wiegand library doing that, or the reader reporting it in a non-standard format? I think some of the HID readers can be configured in weird modes

Unsure. I just swapped in the AWID reader and got the proper reading.

Since the AWID reader is reading AWID 4bit UID perfectly and Prox 7bit UID perfectly, I have to assume it’s a configuration problem with the iClass SE. However, HID won’t talk to someone that’s not an authorized end user, and I can’t begin to guess what special configuration cards I need to undo this, or how much such cards will cost. I think my only recourse is to code for the reader. Not sure what would be better, using LF and a 7bit UID or using HF and a 4bit UID. I do know the HF has really shitty range.

I reversed the FOR loop that populated the card string. Still only get 4 bytes, but they are in the right order now.

Now if I can figure out why it’s only sending 4 bytes.

Alright, so I used the basic example sketch that gives a bit length and UID. The output for all cards says 32bit and reads the 4byte UID backwards.

Is that was I need to change in order to get a 7byte UID?

But your workaround is also fine, as much as 4 bytes is ‘less secure’, it should be secure enough for a domestic use, and as you know, if someone is copying your card anyway and extra 3 bytes is pretty trivial.

I already told my son if he can manage to clone my UID onto a device without me knowing it, then he deserves it.

Looking at the wiegand library I’m using, it supports 26bit and 32bit. Perhaps the reader is sending 56bit and the library just doesn’t support it. Further research is required. Or maybe I’m just reading the docs wrong. 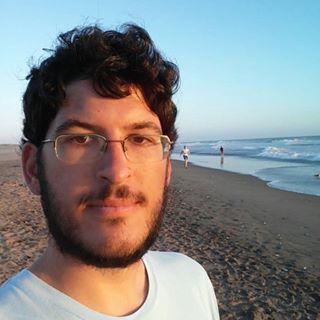 Event-driven Wiegand Library for Arduino. Contribute to paulo-raca/YetAnotherArduinoWiegandLibrary development by creating an account on GitHub.

I’d probably just call it a day now you’ve reversed the bits. Getting in to reconfigure HID readers when you’re not a partner as you indicated is really difficult. And 26 bit Wiegand is used to secure government buildings! I think with 32 bit you’re fine for most threats, if they want to get in they’ll smash a window.

Unless you’re going to proper crypto or some sort of rolling code, i think thats good enough.