How much should the xNT implant move around?

Got mind a month or so ago, the injection site healed up almost, its just a small bug bite. For the most part, the implant stays around the place that it was left at which is equidistant in the V pocket of the index finger and thumb. Sometimes, when I go to bed and wake in the morning, its traveled back to the injection site, I have to push it back. It worries me because, I weight lift and if I was to lift with it unknowingly shifted I feel like I might do some damage.

How much is normal? How much should I worry about? I there a way to secure it and have it stay in one location and not move around?

At the month point your implant should be encapsulated and not migrating. Some people do have problems with migration because their bodies cannot encapsulate the chip with collagen and fibrin very well. Some people have been able to resolve this issue by creating a splint or barrier of some kind to stop the chip moving. Some have used toothpicks cut to rest on all sides and medical tape to hold it down tight to the skin. Once the tag is immobilized, they help their body by resting more, taking prenatal vitamins and gelatin (helps build collagen), and taking a break from strenuous workouts or physical activity for at least two weeks.

I stopped working out for a good month (anything using my hands), I also put a little piece of tape to stop it from traveling downwards. It seems to help for a bit, but now its moving around again. I guess I will have to do the tape trick again. Are there any vitamins that you specifically suggest, any good brands that people have taken with success?

Pretty much any pre-natal vitamin + gelatin (jello or just make your own gelatin cubes) will do a good job… no specific brands, just something available at your local pharmacy.

got some of those vitamins, now its been moving around a lot now, its even migrated to the crux of my palm. I tried to secure it with some tape over night, but it doesn’t seem like anything is helping. Tried to put some ice on it to tighten it up. Seems like the more I start stressing out the more its moving around, it move around the most after I sleep and wake up in the morning.

What worries me when it starts shifting around to my thumb fold region. Any more advice? Is the collagen coming off as it moves around? Beginning to get really worried.

Migration is not a big deal really… it can move around under your skin but as long as it was placed into the fascia layer between dermis and muscle, there is very little chance of it moving into muscle or joints or anything like that. It might scoot to an area overtop a joint or into a spot that isn’t ideal, but barring some really unlikely circumstances, it won’t lodge itself into anywhere important.

The part of your OP I didn’t really notice before was this bit: “Sometimes, when I go to bed and wake in the morning, its traveled back to the injection site, I have to push it back.” - This is normal and part of healing… implants can sometime scoot back the direction they came to rest right under the injection spot. I think “pushing it back” caused the darn thing to never settle down. The initial reaction your body has is to heal around the wound… it’s what helps encapsulate the tag, but now that the wound is basically healed up, all the pushing and fiddling kept the tag from being encapsulated… it’s basically loose in your body and it’s not able to illicit enough of a response from your immune system to warrant any collagen growth.

It’s part of the training I typically give partners to instruct people to not fiddle with the implant… don’t push on it or move it around under the skin… however it settles is how it settles… I think this is the problem here… you no longer have enough of a wound response to get your body to lock that thing down.

I think removal and re-installation with a 10g needle and taper is the best course of action. The tag can be autoclaved, but test before implanting by putting sterile gauze over and reading with a phone.

OK, I will stop moving it around, I’ll give it some time and see what happens, if it doesn’t get better, I will take some evasive action.

Mine moved around a little immediately after implanting.
So I put in a stitch to stabilise it at the end of the tunnel.
I had to revise the stitch 3 times before I got it right.
One of the advantages of being a physician. 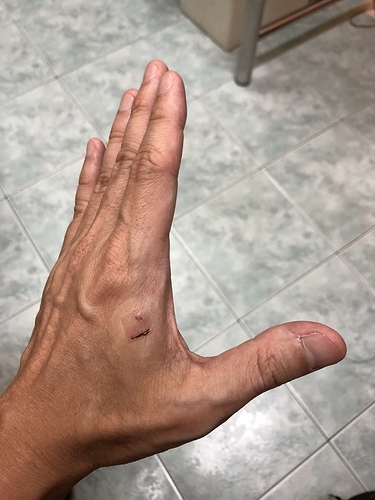