I think I fried my XAC

No but my car likes to kill batteries even without additional parasitic devices. Just too many electronics. Alternator is fine, replaced before I bought it with an upgraded one for a sound system they had, and terribly removed before selling it. I’ll get all that worked out after I get it working as intended. I drive my car for work so there shouldn’t be any issues for the foreseeable future. I always have a charged jump pack, and worst come to worst I have push started it a few times since it’s a manual.

Fair enough, just have a membership there might as well use it. It’s 24 hour and uses RFID so it’s an excuse to use my implant and get off my butt and go make something

Maker spaces are probably the only thing I miss from living near a large city.

Regarding battery life, I’ve got a v1 xAC hooked up to a repurposed drill battery pack. It lasts about 3 weeks between charges. I could probably run it 4, but why push my luck? I don’t think it’ll even make a dent in your car battery as long as you drive it once a month or so.

Ok, so I’ve put this off forever I’m going to try to refit my pistol safe to use rfid Probably another XACV2 like my big safe project This will also be a nice portable demo for CircleCityCon (@darthdomo @init6 @Kdude0) Stock unit [image] (Yes I’m aware of it’s backup key vulnerability, I have plans) I do like it, it’s made of actual steel, not just sheet metal… and fully welded… plus that door seem is very nice… much harder to pry Thing weighs probably 40? Lbs… it’s physically built ni…

I too Am paranoid about battery being run down

I use an XACv2 in it, and additionally I managed to get a timer relay circuit to work, pretty much exactly like I’d rig it IF\WHEN I go for car, so that the xac is only powered when I need it to be, and not drawing power the rest of the time

Thanks for the great info. I’d rather not wire a button up, just takes a hand away. I wonder if I could do a reverse smoke battery setup. Where it runs off a secondary battery until the secondary battery dies then it runs off the car battery. I have a super small 12v battery(about the size of 2 dangerous things implant boxes stacked on top of each other)that I could run in deep cycle…or just run in deep cycle and just hope it keeps up with charging, with how much I drive, I imagine it will be okay with just deep cycle. There’s just no backup if the secondary battery dies since they(the batteries) should only be connected when acc power is running

I’d rather not wire a button up, just takes a hand away.

What do you mean?

In my setup you tap the button,
You wouldn’t need to hold it down
and it powers the reader for however long you program it, I’d probably set it for a minute or something

So in this video, my safe is running purely on battery power, and there is zero draw till I tap the button,
Then it’s powered for 30 seconds 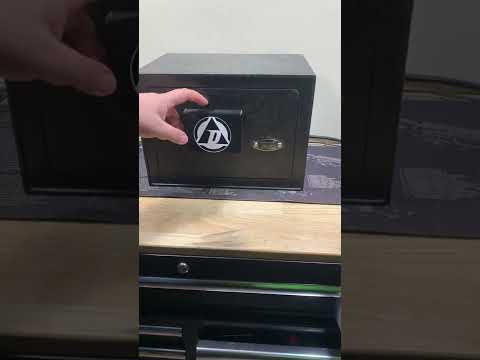 You could even do some kind of foot tap on the bottom of the car if you wanted to be all hands free, but in context you still need to scan your hand soooo

Fair enough. I’ll probably just do deep cycle for now, I only have to run a couple extra wires for that. All interior wiring, no drilling of holes, just simpler. If a drill battery will last weeks then this battery should last a while longer. Can always make changes later(my door panel is pretty easy to remove)

just hope it keeps up with charging, with how much I drive, I imagine it will be okay with just deep cycle

You could use a Voltage Sensitive Relay (VSR), your alternator will charge your main start battery, then kickover to charge your “house” battery when it reaches a specific voltage.

Hard to explain. But the main point is the XAC still works, just as far as I can tell only on the NC side. The NO side seems to be permanently NC now

I misdiagnosed the problem… You removed the S3 jumper, right? It looks like you’ve got a burnt contact in the relay of the xACv2.

You can replace the relay if you’ve got the soldering skills or can enlist help at a makerspace but I’d just order a new board.

I’ll see if we have a relay on hand. My dc circuit knowledge may be rusty but I can still solder damn well lol.

On a previous similar project, the community came up with some power saving concepts for me.

PIR sensor right next to the reader? That way you maintain the whole hand wavy magic bit. You could even remove the white dome lense, since you don’t need a very wide angle. They consume less than 2mA, so it’s not as power efficient as a momentary switch, but it would bump you from 254hrs to 2000hrs between charge. If you want a capacitive touch module, you could use a momentary one like this from Adafruit. It can be modified to run at 50uA. Hypothetically you could use the entire toolbox as th…

You could also use a reed switch that’s closed by a magnet. IF you also have a Titan or xG3 in the same hand, and you lined up the reader / magnetic switch to be activated at the same time when your hand is in position. (Might make for tricky hand placement).

Ultimately, my solution was a bigger battery. Can you mount a second full size car battery under the hood and wire it in with heavy cables to the first? Bonus! You’d get twice as much reserve for starting, etc.

Ultimately, my solution was a bigger battery. Can you mount a second full size car battery under the hood and wire it in with heavy cables to the first? Bonus! You’d get twice as much reserve for starting, etc.

That’s the plan with deep cycle, except with a golf cart sized 12v

@enginerd thanks for you help, got the xacv2 up and running again. Had the whole thing wrapped in electrical tape while installed in the car and when I fried it…so I never saw the giant burned trace on the back of the board connecting the NC wire on the wiring harness to the relay. The copper traces were in pretty bad shape, but I was able to repair the traces. They were still loose(still had good continuity)and coming up from the board, so I also added a back up jump wire between the two

All fixed!!! Here it is in action! Bonus I can lock my car with it if I keep holding the implant up to it. It uses weird logic with the way and duration the key is being turned, and for whatever reason continuously unlocking eventually locks it

It’s probably just me, but all I get is sound.

And… it plays fine on my phone.
Some days, I’m just, Fuck Technology. I wanna bang rocks together instead.