If you’re considering buying an Idesco Door Handle 7N - also sold by U&Z as the CX6172 elektronischer türdrücker apparently - then don’t bother: I went see the manufacturer and tried to make it work with my magic Chinese Mifare Classic 1k implant, but it just won’t see it. I mean it works fine with the exact same chip in credit card format, but not with the implant version.

As far as I can tell with the DT RFID Diagnostic Card, when the door handle is waiting for a tag to be presented, it sends out weak probe pulses. Then when it sees something that responds to the pulses, it goes into full power and reads the tag’s UID. It probably does this to preserve the battery. But the unfortunate side effect is that the probe pulses are too weak for an implant to wake it up.

That’s too bad, because the product is clever and very well made. It would have been better with an IR proximity detector or a button to wake it up or something. I really wanted one for my new home, but… there ya go: no joy with implants with this one 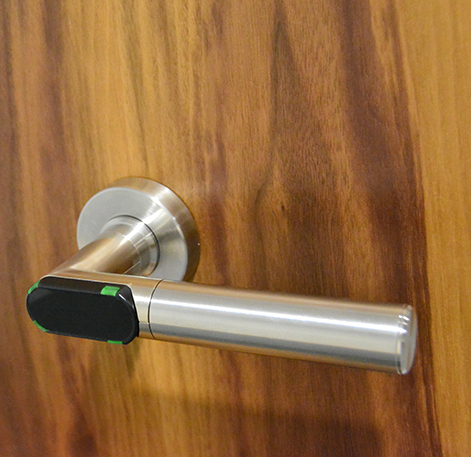 That’s a bummer. It sure is a nice handle

Would have loved to have gotten one for my apartment

I might just be persistent enough to return to the manufacturer and propose a change to their firmware. But right now I think I’ve wasted enough of their time, so I’ll just leave them be for the time being

I think Amal and I saw this at a trade show last year. As you stated, the issue is the implant is not big enough to trigger the wakeup. Typically the reader is looking not necessarily to read the implant, the power is too low for that (to save battery) but to detect a change in tuning. That detection tells it there is something in the field and we should power up and see if we can read it. The implant does not present enough of a load to change the tuning of the reader antenna to trigger the wakeup.

If you trigger it with your diagnostic card and have your implant in the right location, it may read it.

What they need to do is allow you to wake it up with a turn of the handle. Like acellerometer or piezeo based wakeup.

If you trigger it with your diagnostic card and have your implant in the right location, it may read it.

That kind of defeats the purpose though.

What they need to do is allow you to wake it up with a turn of the handle. Like acellerometer or piezeo based wakeup.

That would be best. But that would require a PCB change, and I don’t think implants are big enough of a market for Idesco to bother.

What I had in mind was proposing them to change the firmware so that you can program the handle to send out a strong detection pulse every 3 seconds instead of a weak one every second or something, as an option for implant wearers. Even if it shortens the battery life significantly, I’d buy it. And since it’s just a firmware change, it’s very cheap to implement.

I wonder if the upcoming “flexM1” implant (UID changeable mifare classic 1K) would be a viable option for this lock? I should have a considerably stronger signal than xM1

On the device I tried, a coin-sized tag triggers a read when it comes to within 5 mm of the read area. I guess if you get a M1k coin (such as these) and a FlexM1 and the two have a comparable read range on a regular ACR122U, then the FlexM1 would have a fair chance of working correctly with the Door Handle 7N.