Issues with a Hornady Wall Safe

I have a Hornady Wall Mount Rapid safe which has RFID. According to their support and the generic RFID tags that others have gotten to work it should be 125Khz.

I purchased the xEm kit and haven’t been able to get the diagnostics card to light up on it (it will light on 13.5MHz stuff I own). When I try to set the tag on the lock the lock just times out. I’m assuming since I can’t get either device to work that it’s a problem with the safe.

Any advice on where to go from here would be greatly appreciated. I have no problems buying a few things for testing as long as they are under $60.

It sounds like the xLED is detecting the wrong frequency! Do you have a 125Khz xLED or a 13.5Mhz one? Any chance you have a DT diagnostic card?

Oops. I meant the DT card. I don’t have the xLED

There are a couple factors here.

1: the DT diagnostic card may not pick up the field. Try doing it in complete darkness and see if you can see anything on the green LED. It may just be a tiny very dim blip.
2: In order to save battery, the electronics will typically be in low power mode until it detects a tag. This means unlike wall powered equipment that have the RF field on all the time, the safe will only turn on the RF field for a few ms every few seconds. Once the presence of a card is detected, it will power up the RF field to full power and then read the tag. One of the side effects of such small tags used for implants is that sometimes the do not provide a big enough load to the reader for it to detect that there is a tag there and won’t power up.
3: Even powered up to full RF power, there may not be enough power to properly couple to the small xEM tag.
4: Have you ever cloned your xEM to any other card? It needs to be in EM mode.

I’d get a LF xLED for further testing.

I’ve had a few readers not work with the diagnostic card. I have an ID-12LA reader and even with contact to the reader it wouldn’t light up.

Could it be its lightning up super faintly? I have a reader that is so weak I essentially need to shield the card from the light to see

So you do have it working! Good to hear. I can’t get the xEM to pair. I can’t even get the safe to show that the xEM is a non paired tag. I even too the safe apart to get as close as a could and reduce interference from the metal.

It’s possible the tag is in the wrong mode. If you’ve cloned an HID tag to it it may not work.

I haven’t changed the tag at all. The safe doesn’t even pick it up as being an un paired tag.

I’m going to try to test the xEM on another device but at this point I’m suspecting a bad xEM.

The problem with the current xLED-LF is that it was designed with a high power LED that draws a lot of current. This works really well for certain readers, particularly door readers and other access control readers that have a major source of power and don’t care about conserving energy. Battery powered applications like a gun safe care a lot about power efficiency and so may produce a weak field, or an extremely short lived field, both of which present a problem for the LED inside the xLED-LF. In short, it may not be possible to get a good indication on certain readers.

This problem also applies to the RFID Diagnostics Card, but add to that the difficulty in getting enough inductance for a 125kHz L/C circuit on a copper trace PCB design and you end up with quite a large coil. The coil size on the RDC for 125kHz is quite large and requires either a powerful field or a reader antenna that spreads a weaker field over just the right area for the card to light up. Again, the RDC will work just fine for 125kHz detection with most mains powered readers or readers that don’t care so much about power efficiency… it’s those small battery powered readers with smaller antennas and weaker fields that will pose the biggest problem.

I’m going to try to test the xEM on another device but at this point I’m suspecting a bad xEM.

Try recording a video of this process.

Also, it will require special placement of the xEM to get a read. Most reader antennas are designed as large loops that work well with keyfobs and cards that have flat spiral plane antennas inside them… but the xEM has a 3D cylindrical antenna, and requires perpendicular placement over the reader antenna coil… like this. 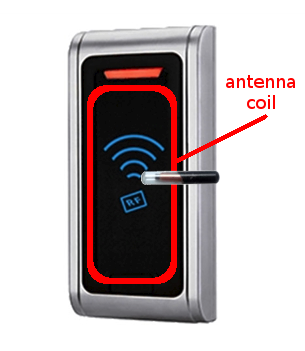 So while you might drop a keyfob directly in the center of a reader coil, the xEM needs to be placed perpendicularly at the edge of that coil. Not intuitive at all.

I got mine working with some light hacking. Its the antenna that is an issue.