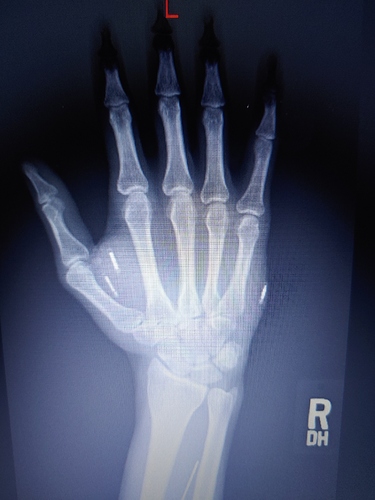 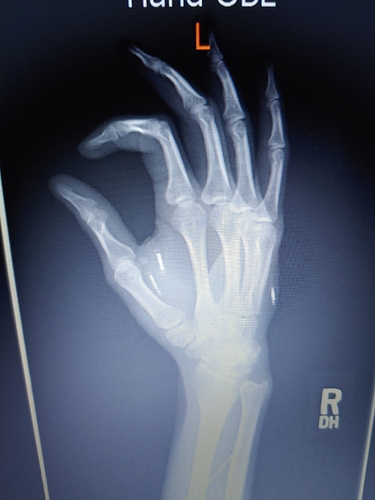 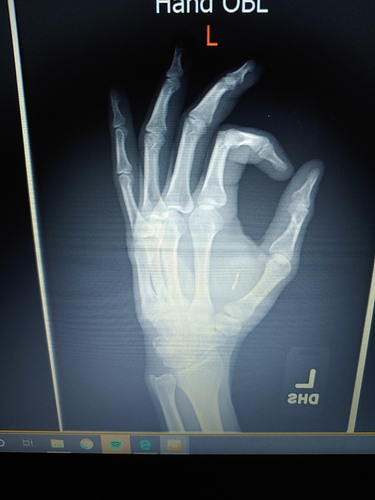 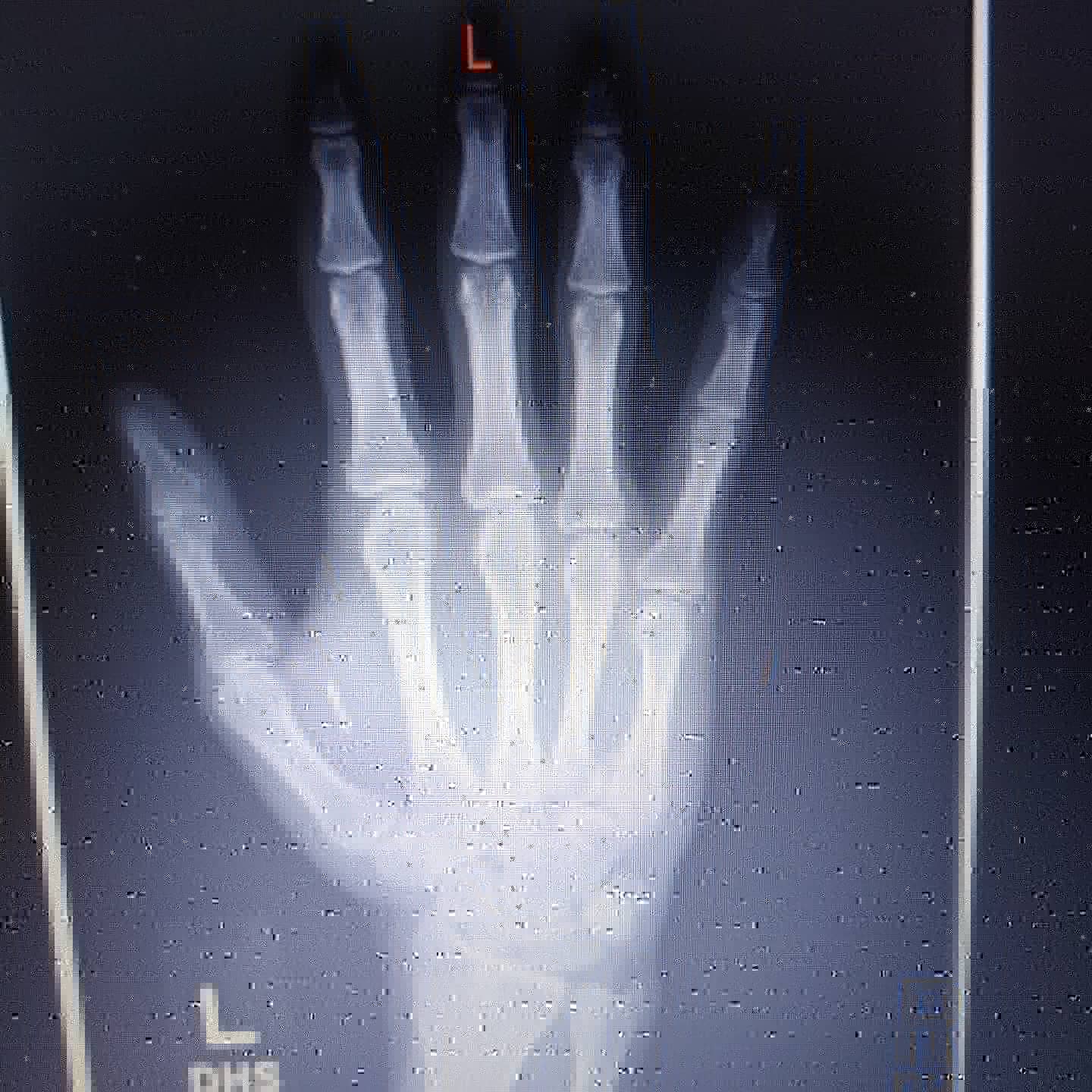 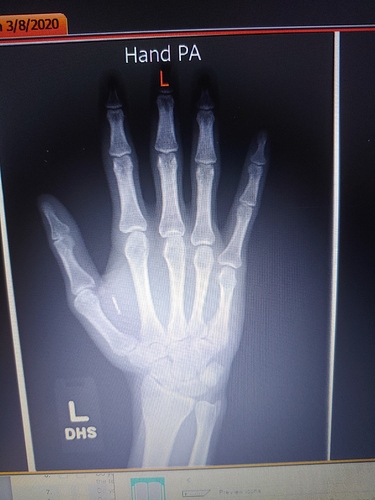 Just a side note I flipped one of the pictures of my left hand for comparison to my right as I fractured my 5th metacarpal around a year ago and have had a bump on my hand since then. I wanted to see if it was the bone sticking out or if it was my body adding padding to the area since I never went to get it fixed.

I got my x-rays on a CD and I haven’t seen a way to save the pictures because of the program that they use. Once I figure it out I can upload the actual files instead of pictures from my phone if anyone is interested

Screenshot would be a simple solution! save as Jpeg, PNG, etc…

Would you consider Changing the title to “Post X-rays Here!” or similar, A place for people to share their “Bone Photos”?

I can see this being somewhat beneficial to any of you on the skinny side of the spectrum. You can see the outline of my skin and how little room I have to play with. On my left hand is the xNT. On my right (from left to right) Spark 2, xLED, then xEM. The xEM is not completely under all layers of the skin as I did not know when I was actually all the way through. I understand that going to a professional would be better but I’m trying to learn so that I can provide implanting services for those interested in my area. That was the first time implanting on the knife edge for me and the skin is very different even though it’s not far from the most popular webbing location.

Changed! I’ve seen a few but really thought there should be more. I implanted one in my right forearm (top side) more so as an experiment as I had a few extras. I thought as I was getting the needle in that I had hit something I shouldn’t have, so I injected the tag as much as I could and pulled the needle out. Similar experience as with what I said about the xLED. it was sticking out a bit but this time instead of shoving it through, I had made another hole with the needle 180° in the opposite direction of the one with the tag in it, but still in the same location as the original hole. I then pushed the tag farther into its current hole and then slid it back over into the new one so that the center of the chip was sitting directly underneath the hole. I hope I described it correctly it was a strange process. But it did work.

My intent going into that experimental procedure was not the way I did the procedure, it was experimental because of the location. I have only seen a small number of people doing injections in that area.

Nonetheless I slammed it at work and it started to bleed like crazy so I went to the ER and they took x-rays. The tag was nowhere to be found. It could have popped out or migrated somewhere else but it is nowhere to be seen in the x-rays.

My major concern with doing injections in general is hitting a nerve. The feeling of getting the bevel passed the skin is one feeling, sliding it underneath the skin is another. I am aware and understand both sensations, but on occasions when doing injections there are other random sharp pains when pushing the needle. Since I don’t know what it is I tend to assume for my own safety that it’s a vein or something else of importance. Due to this assumption I inject as much as I can and back out. On all 5 I have done though I have have no brushing under the skin, but on 3 I have had a considerable amount of blood pool into the injector. Having someone with more experience in doing injections in their own would be tremendously helpful

I see what you did there

Tech told me to do this and I was like are you sure? Lol

That was the first time implanting on the knife edge

Do you have any comfort issues with an implant installed there? I tend to rest my right hand on it’s edge a lot and I feel like that might become uncomfortable if I install something there.

Do you have any comfort issues with an implant installed there?

I didn’t have any issues with it after the first couple weeks. I can only feel the thing if I really try to.

It’s still in the healing process but it’s not terrible, no more uncomfortable to me than the webbing. One thing to keep in mind that I didnt think about was shaking hands with anyone who has a firm handshake. Another is if you use that part of your hand to do “percussive maintenance”, as in heating the hell out of something until it works.

Unfortunately I don’t have any xrays to contribute, but I must say I absolutely love seeing all of these, it’s really appreciated

This was my concern with the knife edge

Here are three X-ray shots of my R0 NeXT about two weeks after implantation. The original DICOM/PNG files with 2000 * 3000 pixels resolution are available for re-use, if you are interested, let me know.

I suppose I should link to my totally unimpressive doNExT x-rays here:

My face got in the shot here. xNT and flexNT. flexNT is super faint, but visible over the first metacarpal of the pinky.

Here’s the flexDF. I don’t have x-rays of my Vivokey or xSIID

One thing to keep in mind that I didnt think about was shaking hands with anyone who has a firm handshake.

Yeah, bet this isn’t a problem for you anymore.

With the logo and all!

Wow I would thought you’d see more.
I can’t even find the chip…