RFID readers and NExT Implant problem

I’ve implated last week my NExT implant, my first step was download the DT app and set the password, when I tried I got the first error: Lock bits already altered.
Then I downloaded NFC Tools Pro for check if my chip was there ( lol ).
The NFC Tools scan my tag, and give me the informations like:

I bought PN532 to read the UID from arduino, but the reader don’t find the implant, I tried with a card and small token and work well, I tried RC522 rfid reader, and same thing, cannot read my implant, can anyone help me?!

The NeXT comes with a password by default, so you can’t use the DT app to set the lock bits. Try using the X-field tester (if you got one) to find the best position to have your NeXT put to it, and the best orientation. Since it was implanted relatively recently, the read range may not be at it’s best condition yet.

The NeXT is already locked. You do not need to set a password with the DT app.

See this video for your other question.

My problem isn’t with range I guess, because NFC Tools on my cell phone, find “easy” the chip, both rc522 and pn532 can’t find, there anything I can do? like setup an UID or something like that?

Yestarday I tested the led field detector and the capsule didn’t blink above pn532, it’s normal ? or the problem is the sensor?

@amal Can you help me?

What are you using to drive the PN532? It doesn’t read out of the box, you have to add a microcontroller and write code to configure it and put it into read mode… Post your code you are using,.

Also where did you buy it from? If you bought it anywhere other than DT, it’s likely fake that will have greatly reduced range.

Success! PN532 is not easy to work with! Projects

So of the three PN532 boards I bought, two were from amazon, one was from ebay, but it was dropshipped from amazon. I noticed in another thread that there was a difference in the silkscreen between the one DT sells and the ones I bought from amazon/ebay. The amazon/ebay ones were significantly cheaper than the DT one…and now I know why… They appear to be fake. The one DT sells has a significantly better range reading an implanted xNT than the amazon ones. The amazon one (all three amazon boa…

@turbo2ltr I’m using an arduino for it ! I bought from sparkfun.
I don’t think the problem is if is fake or not, my PN detect the card like 2~3 cm away from reader.
Does RC522 should read the implant too?

Your NeXT should have come with HF and LF xLED field detectors… They look like glass implants but they have an LED in them… If you put the HF xLED near the PN432, does it light up?

If the field detector doesnt light up alt all, then its a good indication it will be very difficult to get it to read a tag. Did you watch the video I posted? Unlike a card or a fob, the glass tag’s location and orientation in relation to the antenna is very critical.

Also, you may try putting the xLED across the antenna (see video), then moving the diagnostic card near the reader and see if the xLED lights up too when the card lights up. If it does, the problem is how the PN532 is set up. Let me know, and if so I’ll go into more detail.

@turbo2ltr Yes ! I passed the detector in every square of the board ( pn532 ) and nothing, no light’s no blink… In my phone it recognize… but on readers, nothing ! 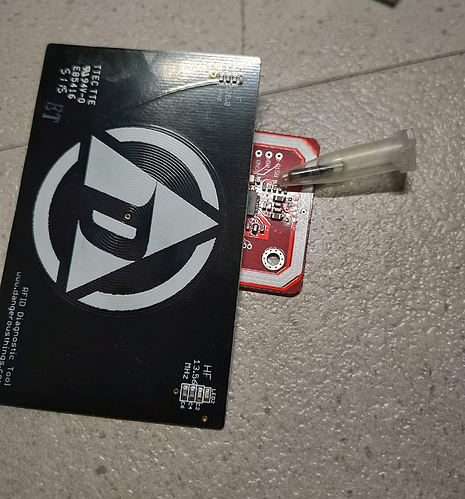 @turbo2ltr, I did and nothing =[ just the led of the card

Sounds like you might have an aftermarket PN532 with reduced performance. Did you get it it from DT? What is the model number written on the chip in the middle of the board, and is there a brand like “Elechouse” written in white on the board?

Check the logo on the chip. If the 4 points of the X don’t touch the N and P, its definitely a knockoff. The real NXP logo does not have any space between the letters.

@turbo2ltr as Satur9 said, have the written in the board

What about the logo on the chip? All my fake ones say elechouse, not sure about my real one…