((CAPTCHA: The Apex will be out Soon

Here’s the original article linked but I don’t know what George Takei said.

Thanks Zwack. I figured the cringey FB comment section was half the fun

This is what I can see, apart from the people freaking out in the comments section…

Saw the article a couple days ago

Coments on both are what you expect

Uninformed and misinformed people assuming they know anything about anything

People were arguing about batteries, that 125 is always active power… tracking, etc

I’ll see if I can screen shot some gems

Talking to her now

In the interest of exposing myself to opposing ideas, I’ve been searching for intelligent and well-articulated anti-implant arguments. And in the mountains of religious, conspirationist, paranoid and otherwise uninformed garbage, I did find a nugget. Maybe you’ll enjoy it too: 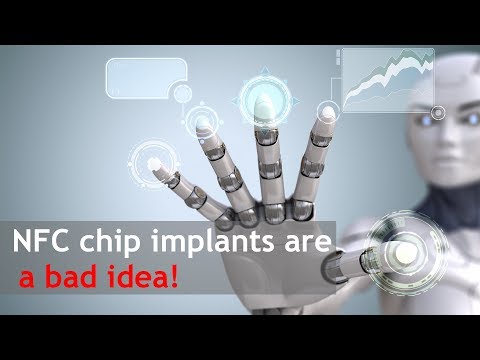 The guy is an implantee (and one who got press too), and he puts forward 5 fairly convincing arguments against NFC implants. I actually agree with his points, seen in the light of his experience of having a single glassie, trying to exploit it for actual useful purposes, and apparently having no particular interest in getting more involved in biohacking, moving up in implant size and count or putting hardware together to go with his implant.

And in that respect, he’s very representative of the majority of people who might be tempted to implant something. In other words, he’s interesting because HE is the future of biohacking, unlike us who are fringe and willing to go to what most people would describe as extreme lengths to get what we want.

He’s well spoken, his views are balanced and based on experience, and he’s not unhinged. Well worth a watch.

The gist of what he said is: a single glassie isn’t terribly useful in today’s NFC infrastructure (and he’s totally right - you need several larger implants to truly “live the dream” somewhat convincingly… today) and his argument about putting your health at risk for the benefit is valid.

I think what he means to say is that it’s too early for the common man. I kind of agree. The health bit is debatable.

As someone who isn’t implanted here are my comments on his 5 reasons.

His point about “if it doesn’t add any significant value” gets back to my usual point about what is your use case?

He did miss the fact that a non implanted chip cannot be used to guarantee your identity, while an implanted (non cloneable) chip can.

An interesting view, but one that is in my opinion less than accurate.

1/ I fucking hate keys and passwords with a passion, and I hate body-worn devices. Point moot for me.

2/ He used an NFC glassie. RFID glassies are much more forgiving. In fairness, NFC glassies are difficult buggers. He’s right. And if you’re a hygiene freak (isn’t everyone a bit these days), yeah… you’re fondling a device you shouldn’t be fondling in an ideal NFC world.

3/ If I was an SAS customer and I wanted to board a flight with NFC (and boy I guarantee you that I would, because that’s one less occasion to carry bits of paper or a cellphone around) then I would get yet another implant. And most likely a flex. If the readers in my local buses worked with my converted bus card, that’s what I would have done too. The issue is, you can’t multiplex in today’s NFC world. The guy is totally right: one chip, one application. If you don’t want to implant more than one chip, that forces you to format the one you have and it totally blows the usability out of the water.

4/ The chip should be chameleon as much as possible (and for certain applications, they already are to a certain extent). But ideally the infrastructure should understand the concept of a single tag usable for multiple purposes. That’s not the case today, and I fear it won’t be until the very concept of implants starts being taken into account by designers. Because if the tag isn’t an implant, why even bother? Just use several tags. That’s what’s happening today because implants and the need to avoid collecting multiple implants aren’t even on the radar.

5/ The guy’s health argument hinges on risk/benefit. His conclusion is that the usability benefits don’t outweigh the health risks for him. Fair enough. They do for me, 10 times over. To each his own.

An interesting view, but one that is in my opinion less than accurate.

At least unlike the usual crazies, you can have a real discussion around what he says.

one chip, one application

I’m not saying the technology doesn’t exist, I’m saying by and large, the world has more dumb Mifare readers and single-application smart readers than multi-application ones.

That’s kind of my fear with the Apex when it comes out: it’ll be multi-role, it will do many things, but nobody and nothing will take advantage of its capabilities out there. Then again by the time it comes out, Vivokey will have become as big and powerful as Google is today, so there is hope

As for the “potentially cancerous” I am assuming that this is a claim that the electromagnetic radiation could potentially cause cancer.

I think that he might be referring to the tumors in rats thing. Amel covered this a while back:

There has been some “hubbub” published by certain rabble rousers bent on building an audience of angry people eager to donate “for the cause”, or buy nonsense products sold to them on air… think “Alex Jones” type of people. They were pushing the idea that “RFID implants cause cancer” and pointed to two papers that mentioned surprise tumor growth around the implant site of the study animals. The thing they don’t tell people is that both these papers studied various aspects of cancer, and the lab animals they were using to test on were either genetically destined to get cancer, or were given chemicals to induce cancerous growth - in other words, those animals were definitely getting cancer so it could be studied. The part that was surprising to the scientists performing the study was the large number of animals that did develop a tumor around the implant site (along with a number of other tumors throughout the body). This was not really surprising though, because tumor growth is often initiated in areas were there is inflammation or inflammatory response. Even getting an injection or IV line can cause tumor growth. It’s so common it’s called Injection-site sarcoma (ISS), also referred to as fibrosarcoma. Because these pet implants are coated with anti-migration parylene coating, the tissue that grows into that coating will always be in a slight state of irritation and exhibit inflammatory response.

Another weird thing is that the guy who made the video against it, mentioned that people where “pushing the use of NFC implants”. Sure, some of us love the idea but I don’t think that anyone in the biohacking community would press others into getting implants. We’re the ones talking about morphological freedom after all.

I understood what he said in his video re health issues as “I spent 15 minutes on Google and found concerning material, but I have my doubt about the material and I didn’t bother to research it more, so I won’t reach any conclusion about this.” He does recognize that he doesn’t really know, which is at least intellectually honest.

To be fair, there is cause for concern. Personally, I don’t really worry about the glass envelopes of glassies - especially since bioglass has been pretty well tested in animals for decades now. Amal’s magic coating however… who knows what that stuff will do to you in 10 or 20 years. We ARE the guinea pigs

The guy in the video didn’t want to be a guinea pig and that’s fair enough.

I am going to assume that @amal has done his due diligence on his magic goo.

I am certain he did his best. But it’s very hard to predict long-term effects of anything. Even companies with vast resources can’t always predict accurately what time does to components. Accelerated wear tests aren’t always representative of actual wear.

In the case of implants, what other tests of time are there than simply implanting the stuff and waiting to see what happens? We’re doing that. And it’s okay. Just like vapers chose to test what vaping does to their bodies over many years, because when it was invented, there was no data. There is now, but it didn’t come from pre-testing.

At the very least I assume he is only using materials that are not known whether they are carcinogens.

Yes of course. But going back to my vaping analogy: all the ingredients in vape juice are classified as GRAS (generally regarded as safe). But that classification was done when ingested, not when vaporized and sent to a pair of lung. The assumption was that the ingredients should be more or less okay, but it turned out to be false for at least 4: menthol, diacetyl (butter flavor), ethanol and vitamine E acetate. Now we know, but the enthusiasts who voluntary played guinea pigs to test that assumption are either pushing up the daisies or breathing through an oxygen mask now.

I don’t know what Amal uses in his magic goo. That’s proprietary. I’m sure the stuff comes with assurances with regards to carcinogenicity and safety and such. But for what purpose? Is it proven to be safe inside the body? Does it stay safe even when flexing for many years - and possibly work-hardening or changing composition during that time? I don’t know. I assume Amal has done his homework and I choose to trust him, but ultimately it’s still kind of unknown territory.