I have no doubts that is why i35E has been under construction for longer than I’ve been alive.

It doesn’t seem counter intuitive to me. I suppose it does if you think that we have reached peak traffic. But I think that the limiting resource in most cities is road space. Increase the road space and more people will drive because there is now room for them. So traffic increases until it is about the same as before.

Portland decided to try the opposite and made a two lane in each direction road into a one lane in each direction. This might have worked out but they didn’t make the bus stops no parking so the buses now have to stop in the middle of the road blocking all traffic in one direction and causing a lot more anger in drivers. (I can’t use public transport most of the time in Portland because I have to drive in about 90 miles or so first).

so as I mentioned previously I’m an inspector at my job now, I’m not an engineer
I know I usually self deprecate on here because programming hurts my brain… and this forum is deep in the programming waters… but I know enough to be semi capable however when it comes to machines and mechanical problem solving and some handy training that was just a deep dive into universal troubleshooting theory

I really should have gone to school for it, but my neurodivergence was in FULL swing in those years and I lacked many of the coping skills I have today in those years and it probably wouldn’t have ended well… I should go back nowadays… but its harder to commit while doing the full time thing…

anyways… the engineers we regularly deal with are not the R&D type, but the glorified babysitter type…
operator breaks XYZ, we fetch an engineer and have them fix it…
so I can understand why they look down on the run of the mill operators…
…that’s not me… I usually go far out of my way to troubleshoot and diagnose issues and have several plans of attack ready before I even bother dealing with them… in addition getting anything is like pulling teeth

" hey engineer, here’s what I’m experiencing, here’s how I’ve isolated it, here’s why its a problem, perhaps XYZ as a course of action? but its your call "
(scenario was about the amount of a liquid compound being applied to a surface, and that the standards were totally unclear… specifically the compound in question flashes off semi quickly… and I was trying to get an answer on whether the compound in question needed to be in liquid form… or SHOULD flash off before proceeding )

“well we want the surface of the part to be of the thing to have ____ applied on it… you should make the surface wet with ____… if it looks shiny, that means it is wet”
…gee shiney = wet? god you’re so smart… what would I do without you?.. probably the same… since I literally didn’t ask you about if the surface being “shiney”, not 5 minutes later I heard her nit picking someone else for having too much of said compound… I was this close to using the " play dumb" voice… and be like… " but so-and-so… I tHoGhT yOu SaId iT sHoUlD lOoK sHiNeY"
( its hard to put into words just how condescending this person is, and how her answer had nothing to do with my question… just take my word for it… just makes my blood boil talking to her)

anyways, this was the backstory you needed to know about WHY I’ve decided to start playing some games… both due to impatience in getting any assistance , and fucking with them

they use a 3d printer at work for a lot of the jigs and whatnot, and I’ve gotten enough of a look at their printing styles, that I can dumb my slicer settings down, and make it look like they printed something…

long winded wind up… sorry, here’s where it gets good

there are all kinds of little things that streamline the job, like a screwdriver holder here, a tray that holds parts in a certain orientation… etc… little things that you couldn’t get them to make for you to save your life… but are useful, and have no downsides… ( I wont fuck with anything that does anything to parts, I know the lines )

I’m now saying fuck it, making my own ( no rules against it, some people have personal screwdrivers etc), and discreetly leaving only 1 float around so that it looks like they made it, ( one is never enough ), and then let it circulate for a while to become familiar (and nobody to know where it came from) and people start fighting over the one good gizmo that saves them time…

then I wait till someone gets peeved off that they cant use the gizmo because the other guy has it, and they put in an official suggestion for more of the gizmo

the person that tells( who is sort of HR and not an engineer, nor do they care) the engineers to make things, all they hear is… " they want more of something that is working… make more of it" … they assume the engineers made it… which they didn’t

… the engineers don’t have the files to “just print another” , initially they talk amongst themselves trying to figure out where the files went… all the while not wanting to tell the person TELLING them to make more that they don’t have the files, so they are forced to sit down and measure and reverse engineer my design… ( I may have put a flaw in one design to see how faithfully they rip it )

what’s funny is, I’d happy make a bunch more and \ or give them my files, … all they need to do is ask

asshole, mad-genius, shit stirrer, or just a guy who builds a tool when he needs it… you decide

I assume you’ve decided to play it that way because it’s impossible to bubble up good ideas within your organizations without being talked down, correct?

I strongly believe every engineer in contact with customers - or other teams within the company, who are also kinds of “customers” in a way - should spend 6 months working 1st line support.

I hope you will update us as things progress }:>

I assume you’ve decided to play it that way because it’s impossible to bubble up good ideas within your organizations without being talked down, correct?

they actually have a fairly decent idea of a program…
if you suggest a tool or a work flow change that is helpful… you get 50$ ( oooo wow, but better than a sticker I guess)

problem is they literally fail 99% of them… which could be one thing if they were shitty ideas… but then later they claim they were already doing it before the suggestion, so it doesn’t count… oh and it takes 6 months… like people have literally put in suggestions… left the company… came back to the company… and then get paid for a tool suggestion…
fuck that Ill just print my own

as a result, people have a habit of using acetone to clean anything and everything at and around the workstations…

knowing this… those of you that 3d print… if you had to 3d print jigs to hold parts, that will get very dirty… is there perhaps a single filament choice that you would recommend NOT using?
… yea… they use abs… for EVERYTHING… sigh

you could use PETG, its nearly the same strength profile… (and you are literally just positioning things… and you could probably SOAK it in acetone…) sigh

quote=“Eriequiet, post:8689, topic:5860”]
but then later they claim they were already doing it before the suggestion
[/quote]

Way to alienate people of good will.

Way to alienate people of good will.

I suspect… maybe optimistically so, that it isn’t an organizational thing… but rather engineers trying to save face… but yea end product… people say fuck it… not my problem…

I’m at the point of, keep your money… I would pay you the 50$ to get the tool or workflow change I want NOW, not 6 months from now… so FUCK it ill just print it lol

… good or bad, I may be sarcastic and cynical, but I cant help but fix things…

Fixing things is the mark of a good engineer. Sounds to me like the engineers at your job are kinda shit and full of themselves.

As an Engineer by title (but not actually an engineer, given that Oregon has a a habit of suing people for practicing engineering without a licence at the slightest opportunity)…

I understand where you come from.

My personal feeling is that whatever your job, customer service is the most important thing. In the case of your “engineers” you are the customer. I do my best to explain things to people as clearly as I can without being condescending or patronizing.

It sounds like your work really needs a serious attitude adjustment.

Fixing things is the mark of a good engineer.

I told the engineer he had 4 choices in that situation…

Option 4? Or is that one left to our imaginations?

It sounds like your work really needs a serious attitude adjustment.

just the engineers… I may bitch and moan, but the company does do good by us…

Option 4? Or is that one left to our imaginations?

I decided I shouldn’t write it, but apparently I forgot to remove all evidence lol

option 4. not catch it the next time it falls, and tell them ____ didn’t want to secure it to the desk

You are so nice to these jerks.

meh, I’ve never been one for going that route…
telling the company, ____ specifically was advised, and actively chose not to prevent 30 grand in damage ( and I really down even want to imagine how much downtime)
is far better than any temporary physical pain

You are so nice to these jerks.

gotta play it the right way… if you come in like a wrecking ball, it blows back on you
the trick is giving the boulder on the edge of the cliff a light flick

anyways… the engineers we regularly deal with are not the R&D type, but the glorified babysitter type…

just the engineers… I may bitch and moan, but the company does do good by us…

Wait, are they industrial “engineers” or actual engineers? Ok, I think you answered that question already…

And I hope not to get lynched for this comment…

Wait, are they industrial “engineers” or actual engineers?

We’ve got several flavors and I don’t always deal with all of them, and everyone gets them all mixed up so I honestly don’t even keep straight anymore

are the “tool” engineers, who build and fix things

I believe they are “manufacturing” engineers… wether that’s the right term I cannot say
They are the “tool” engineers, who build and fix things used by production, but don’t really deal with the product itself 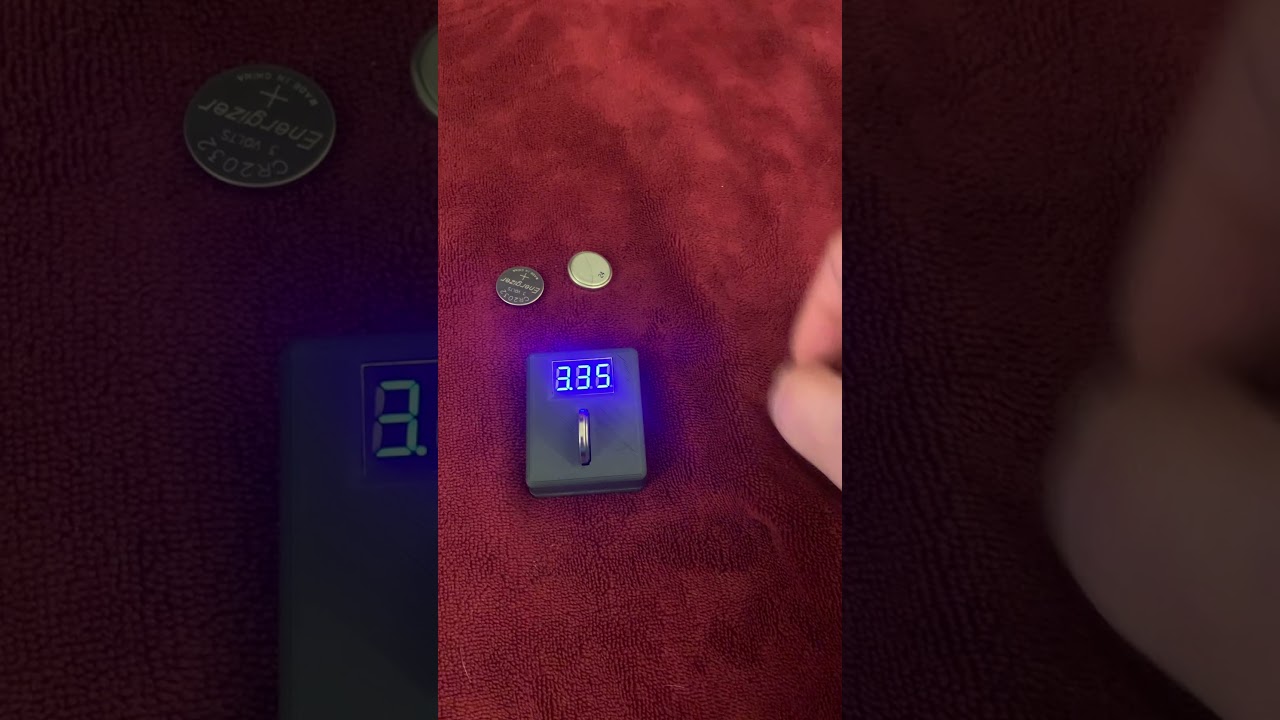 Haha, Wow, I made something VERY similar a good while back, I still probably have it somewhere. ( i’ll show you if i find it ) It wasn’t 3D printed, just in a project box. Yours doesn’t look spring loaded, I did this for mine so I could do 2032s 2016s etc, I was going to add in a seperate smaller button cell compartment, although it was was really handy, I now use a “universal” battery tester, which is built into my Battery cady

Like this one, circled is the removable battery tester (the downside is the lack of voltmeter, just a red, orange, green LED meter.)

It’s a simple flexible design, i’ll take an actual photo of it when I’m home.
You could replicate and put in a voltmeter.

I have another similar one to yours (but larger, made with all salvaged parts) that I still use because my “Universal” tester doesn’t do Hi-Rose connectors