Oh, completely read that as Tim not Tug, my bad XD

As it is now Valentine’s day in most of the world, just remember that nothing says Love quite like a box of bone fragments in what was one of the slums of Glasgow.

I just discovered that Tug (a man I had never heard of before today) was actually the father of Tim.

So there you go.

Any full Stack Software folk in here, potentially up for a chat?

I’m thinking of up and quitting my current job.

Any full Stack Software folk in here, potentially up for a chat?

Hit me on DM.
Or over here.

Deception tactics, they are so good they do this to be less creepy

you can dig into your facebook data, to see what things they associate with you

and its just a fucking field day… now only were there thousands of tags, most of them were not even remotely accurate…

Oh, yeah, I do love how incompetent they are!!

There is some sweet Irony in that because those giants use your data, everyone else wants to use your data. So the same Giants make shitloads of cash by selling said data to the companies that want to “do what the big guys do”.

It crosses the ridiculous line right onto “Those same giants fuck up so badly with your data that by the time they sell it, they’re selling utter garbage”.

And then it gets even better! Since those giants are buying all the small guys who actually knew what they were doing with personal data… and subsequently fucking with said data, they are actually helping us protect our privacy!

And then it gets even better! Since those giants are buying all the small guys who actually knew what they were doing with personal data… and subsequently fucking with said data, they are actually helping us protect our privacy!

That’s what I find funny about it,
I expected to find all kinds of data that freaked me out, but it was so inaccurate that if anything it’s obfuscated my actual data

it was so inaccurate

I mean, when I look at the logic behind those algorythms… it’s a flawed logic from the ground up.
But once you point that out everyone lashes back saying “but they are the giants, so they must know better than you”… and then no one actually dares to question the stupidity behind it.

And to add a cherry on top, it’s the same fallacy the add algorythms fall into:

One add tries to shove chocolate pudding onto you and assumes you like it for no reason. So now all the other add platforms will try to follow that first one and only offer you chocolate pudding, because “someone big said that’s what you like”.

And if you decide to block the annoying blinky adds that don’t interest you and therefore never click on, someone will acuse you of being evil…

15 years ago when we were watching cable tv, we didn’t throw a shit fit over commercials

I wonder if there’s an ad blocker that acts like it loads the ad, without actually bombarding you with it

someone will acuse you of being evil…

So those people read newspapers from front to back including all ads?
No.
I choose what I wanna see and it’s not the ad that’s giving you a fraction of a cent.
Ask me to donate, if it was good content I’ll give more than my click is worth.

Anything new with Vivokey and apex ?

Anything new with Vivokey and apex ?

Not to mention that addvertisers have been used to spread malware… Sorry but I’m not going to pay attention, or I might get annoyed, so I’d rather block the stuff.

And if you decide to block the annoying blinky adds that don’t interest you and therefore never click on, someone will acuse you of being evil

Linus from Linus Tech Tips compared ad blockers to piracy a week or so ago. Something about how its effectively the same as pirating content. ahhh yes, here it is

That’s a huge strech… Louis Rossman published a video on this and I tend to agree with him on the matter. 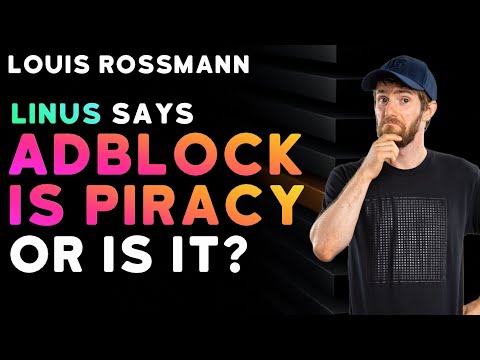 Pretty sure I asked this before, but I don’t remember the answer

But has anyone installed an x series in the upper finger area?