How far out are we from implantable buzzers or other haptic implants?

I’m new to this biohacking thing, so I apologize if this is a duplicate question. I did some searching but ultimately I’m just impatient and excited about an idea I had last night and I need to ask.

In the “Quick Technology Primer” there’s a linked video from 2013 of a TED Talk by @amal during which he mentions a wearable device made up of a ring of buzzers worn around someone’s ankle that would tell them which direction is North at all times. He also mentions that at some point in the future, it could be possible for said buzzers to be implanted in the body rather than wearing a clunky device all day. It’s been almost 10 years since that TED Talk; has there been any progress in this realm of haptic implants?

The reason I ask is because ever since I saw the talk yesterday, I’ve been daydreaming about having that inherent sense of direction. I’ve also been brainstorming ways in which you could extend that sense to also tell you which way is up, which would be useful if you were in deep, dark water and couldn’t tell which way to swim. And also it would just be cool to have, you know?

Anyways, that got me thinking about how I’d implant this in my left ankle, so I asked myself, what would go in my right ankle? And now I can’t stop dreaming about how cool it would be to implant a clock made of buzzers. You could do it with twelve buzzers in a perfect circle to simulate an analog clock, but that would only give you accuracy to the hour… I don’t know a whole lot about binary or hexadecimal or octal or anything like that, but there’s got to be some way that you could make just a relatively small number of buzzers vibrate at different intensities to signal the exact date and time down to the second. You could train your body to wake you up at a certain time—as specific as, say, 8:14 AM and 21 seconds—because it would learn to anticipate what your ankle would feel like when your alarm goes off. If someone asked you for the time, you could rattle it off exactly without looking away from your book. As someone with ADHD, it would be a big boost to my time management skills, I think.

I got pretty off topic there, I should stop rambling. What I’m trying to ask is this: how realistic is the dream of an internal clock? Is there anyone actively working on making haptic implants a reality? Would anyone be able to point me in the direction of research on this topic? Any replies would be greatly appreciated, thank you in advance!

The biggest concern I see is power. RFID chip implants use an electromagnetic field to power the chip and get data from it. With a haptic system, especially one that goes off every second, needs to be powered by a battery. That adds a whole other layer complexity

I use my Apple Watch with haptic feedback on the hour and for alarms, calls etc and it works perfectly and is very discrete but obvious to me. I wish everyone would do the same as I find phones ringing and alert sounds extremely irritating - yay misophonia.

I imagine any workable implant version of this would require the power source to be outside the body so perhaps not much of an improvement but it’s in interesting idea all the same.

If the power source was internal but could be powered by something similar to a Qi wireless charging pad, I think it could potentially work. Maybe you could put the charger in some sort of ankle strap that you put on each night when you go to bed, or—if the range of wireless charging technology improves significantly—you could build a charger into the footboard of your bed.

I hear you on the Apple Watch thing, although that’s actually part of what inspired me to make this post. I used to do the same thing with my Galaxy Watch, but I have a Gen1 so it’s a bit bulky and cumbersome, and my wrist strap broke a few weeks ago so I haven’t used it since. When it happened, I thought to myself, “it would be nice if I just had an implant for this.”

Qi charging implants have been made. But batteries are scary and will always end up dying anyways. Batteries+charging circuit+coil means just to pay a vibration implant it’d be bigger than anything currently available by a lot volumetricly. Then you have the question of how to control it, Bluetooth module probably, then the motor, and the main brain chip to do everything. At best you end up with something just over the size of an airpod under your skin. It’s thick, hard to control, and will die in a few years. You can look at the cyborg nest, North Sense implant. It mounts to the outside of the skin and charges over USB (no need for a qi charging circuit and coil) but it’s still too big to implant easily.

Well … Implanted battery … We’re not there yet …

Battery crash course (the implantable relevant part):
A battery holds a chemical reaction that generate a potential difference (electricity). This reaction, and the charging of said battery, does output gas.
The issue is what to do with this gas … If implanted the gas would now be trapped under the skin: not good …

Pacemaker do have long life battery (I believe they’re silver base electrodes) but they have cavity built in to receive the gases from the reaction. And they are not rechargeable, when the battery is out, you need to go in and replace it.

That being said, I love the idea.

PS: pegleg don’t have a battery, just a coil to receive power from an external power bank with a QI charger.

Would probably need on of these:

or a betavoltaic battery, there’s been a lot of advances with those lately. It would be ideal of course, to just harvest power from the body. Either a reactor that runs on glucose. The other thought I had is to harvest power from the circulatory system, like a tiny impeller or “water wheel” type design. Seems like it would be extremely dangerous, and not a minor surgery. I think there will be more demand and development when there are mainstream h+ implants, or even upgraded limbs. Those will certainly require a lot of power.

Community Project: Cardinal Anyone who would like to contribute feel free to add your thoughts here. If you need to make purchases to support your contribution to the project, see this thread , and direct message @amal or @Satur9 with details. Project threads can get a little out of hand with tons of people brainstorming. I ask that you limit your messages to the topic at hand. Try to condense multiple messages into one post. First off, this project has been created by 24HourEngineer (McSTUFF)…

Community Project: Endochron Anyone who would like to contribute feel free to add your thoughts here. If you need to make purchases to support your contribution to the project, see this thread , and direct message @amal or @Satur9 with details. Project threads can get a little out of hand with tons of people brainstorming. I ask that you limit your messages to the topic at hand. Try to condense multiple messages into one post. This community project has been ongoing for awhile but the part so… 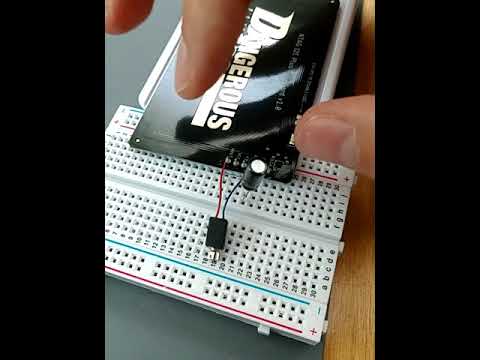 A Motor is good for a wearable that can easily have a battery and the motor can be replaced when it fails, but for implants they’re really not suitable. It can mechanically and electrically damage the implant, requires too much power, and has a limited lifespan.

Personally I would much prefer direct electrical stimulation for feedback from an implant. It’s difficult to get the electrodes to transit the encapsulation without compromising it though. Devilclarke and I were mulling over an idea to have a capacitively coupled electrode that has a plate on the inside and outside of the encapsulation. That could be done with relatively low power, although the voltage multiplier circuit will be bulky. I just haven’t had the bandwidth to pursue it with everything else going on.

I’ve said it before but the best way in my view to create haptic feedback with an implant for fractions of fractions of the power required to run a motor or even a buzzer… direct current stimulation. Shock the tissue. It can be done safely with microwatts of power, and if done correctly you can make it feel like different things as you mimic different action potentials of nerves.

This is done for tongue based devices;

It was still very cool. I loved the idea of attaching it to piercings : North Sense
Their new project, Sentero, is more common as it’s a wearable. Not far from a heart rate monitor.

So, I’m actually working on this as a research project in college right now! No internal power supply, so it isn’t entirely the same, but the haptics will be there! I should be able to give some really solid updates in about a month so check back soon!!

That’s exciting! I’ll be keeping an eye out.