Pictures are always a plus,
Try to stay semi on the topic of the projects you are working on… but we know how it usually goes

(Pilgrim, feel free to nuke or edit this if needed)

To kick of this thread, (maybe)

Here’s what I’ve been working on

Wife wanted me to 3D print her a morning star for when we play DND, that was scheduled very near Halloween

Was a bit of a challenge and growth for me, as I’ve rarely ever post processed a 3D print, let alone anywhere near this level

I designed the head from scratch and went thru a few iterations, and fucked up paint a few times
aswell requiring a reprint of the main body

I’m currently starting pcb design for a thing that snaps onto the back of my laptop with NFC reader, keyboard wedge functionality, and expansion all connected to the 1 USBc on the MS surface go

How? With a ton of sensors and actuators, an ender 3 3D printer, Arduino and wayyy too much software.

Why? I’m studying aerospace information technology and love what I’m doing. Its to test a flight controller software framework I’m working on and be a test bed for future projects.

What’s the struggle? Fusing the damn data from 5 different sensors to get a fast and accurate estimation of orientation and position. I’m guessing the control software is gonna be a struggle too.

Getting better and better at print automation 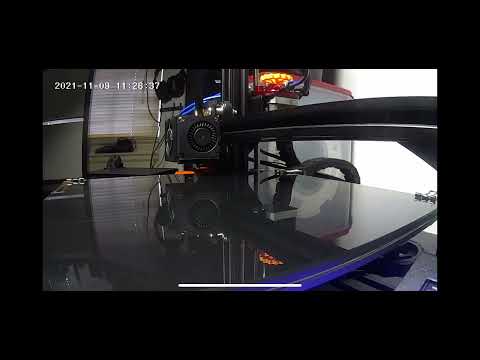 I made a walking toy-the wind up version of myself look fimilar to ranboo plush toy. Scanned my head with an iSense scanner, modified using Meshmixer software, and printed on a 3D printer. Yes, all new technologies should be carefully used for the good of mankind.

Do you have a picture?

15 posts were merged into an existing topic: Need something made? Post it in here

Printed a little mount for my usb hub that can hide under my desk, but close enough to plug in random usb dongles

Not 3D printed, but my DT KBR1 will be split off this hub and live under my desk

Excuse the gaffer tape, I could wait for cable clips to print to mock it up and get it all in place

The kbr is held in place with this stuff, if you’ve ever used it you know it’s crazy stuff… think aluminum Velcro… super stable no wobble, it’s practically glued in place… but it can be popped loose with the right application of force

Also since I don’t have room for an external monitor, I’ve been screwing around with this setup to hold my thin and light (battery heavy) as a secondary display/machine

(If it’s stupid and it works, it’s only slightly stupid)

Going to start trying to sell a few on Etsy

I’m working on a quad nod setup. Modeled after the BPNVG project with a few small changes.

The project uses night vision cameras and lcd screen to grant you night vision, a couple hundred bucks all together for parts vs the $40k for the real thing with intensified tubes and tech that I just can’t get my hands on.
I’ll try to keep it updated with my progress. As I’m waiting for a 13 week backorder on the lcd screens, I’m in no real rush.

I’ve been making these “fog of war” tiles for our dnd sessions, so the DM can cover the map, and direct us which tiles we can remove as we explore

Made a little storage tray, with individual holders that can pop out also

New to the 3D Printing world.

Picked up an Ender 3 v2 and so far have been just slicing with Cura from STLs from Thingiverse. So far mostly with PLA and TPU.

When I get more time I plan to explore slic3r and maybe Simplify3d.
Have some rolls of PLA+ and PETG that remain unopened.

Been wanting one for years and am glad I finally pulled the trigger.

Petg is nice and strong, but it can be a temperamental bitch to print settings right… it can be stringy and loves to stick to anything except the bed… or weld itself to bed if you get too aggressive

That has been my experience with a friend’s SLA UV resin machine. But most of the time, things just get welded to the bed. And that reminds me that I should get myself a Saturn and a flexible build surface for it.

I’ve been building a big battery pack for a while now and just got it mostly completed. The brackets that hold the BMS and the fuse holder were printed on my Ender 3 Pro.

Was talking with @Backpackingvet a while ago about maybe making a real, functional, and live silver bullet

I looked into it for a minute thinking I could just use a standard lead mold, but silver has to high of a shrinkage rate for that to work well

So I wrote off the idea…

Starting to play with the idea of lost-pla casting, or a 2 piece mold formed from a printed positive

I’m fairly bad at art, and only moderately capable of 3D modeling… so best I could manage so far

But I like the idea of like Celtic knot, or some kind of flowing organic swirl… and then using something like rub and buff on it to darken (or lighten

For the sake of ease, I might talk to a jewelry store or something, they often use lost-print casting for super small and custom rings and stuff

Maybe I can have them cast for me to save a lot of hassle…. Probably going to cost more than the hassle it saves me though

You might consider precious metal clay. It has a set shrinkage rate, you make the object (a bit larger than needed) as though it was modelling clay and when it is fired it shrinks and ends up as a metal object.

Some of it can be fired with a blow torch and crucible.