What location is everyone going to have their xLED implanted at? I am considering somewhere other than my hand.

Any update on when we will get a glowing or led microchip?

I doubt I’d get one but if I did it’d be somewhere near my wrist/arm. I’ve seen Amal do a few installs there.

I’m going to wait a bit before getting any purely aesthetic implants. They’re inevitably going to get better.

If I did do any LED implants, they would be to accent an existing piece of body art. For example, if I had a tattoo of an animal, I would put an LED under each of it’s eyes.

I doubled up in the default spot on my right hand next to my NExT. It’s a bit of a tight fit to get 5mm clearance though and depending on the size of your hand might not be the safest option. 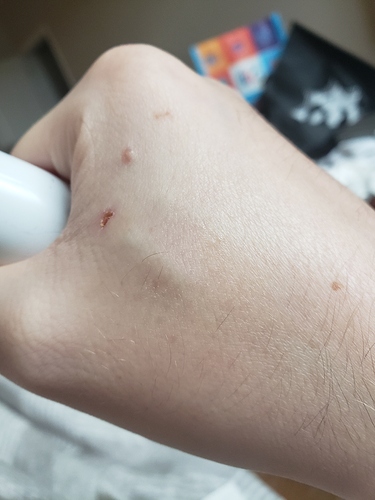 This is where I’m hoping to get mine. Next to the xNT. Same spot. Hopefully my hand is big enough

They’re easily removed so I’m not too worried

They’re not difficult to remove, as long as you have capable assistance. I wouldn’t just brush it off, though. It’s more challenging than the install, you have to do a bit of digging.

[Warning: there is a bit of blood] Hey All, So I’ve had an xNT installed between my thumb and forefinger (the usual place) since 2015, but I wanted to open up that space for the expanded capabilities of a NExT. It was time for an upgrade. I went to my usual guy. We decided the first step should be to remove the xNT and then install the NExT. The xNT was removed through an incision closer to the wrist-side of my hand, then the NExT was installed via the normal implantation method (syringe) fro…

Yeah, I am concerned about putting two chips that close to each other. I am sure it’s safe but it’s just not something that I am comfortable with. I am thinking about the fleshy section where you have meets your wrist. Seems like there is a decent amount of skin there. Learned from the magnet that the less meat can cause some issues. I tend to bump my magnet often enough that it’s irritating when I do.