[Warning: there is a bit of blood]

So I’ve had an xNT installed between my thumb and forefinger (the usual place) since 2015, but I wanted to open up that space for the expanded capabilities of a NExT. It was time for an upgrade.

I went to my usual guy. We decided the first step should be to remove the xNT and then install the NExT. The xNT was removed through an incision closer to the wrist-side of my hand, then the NExT was installed via the normal implantation method (syringe) from the distal side of my hand. 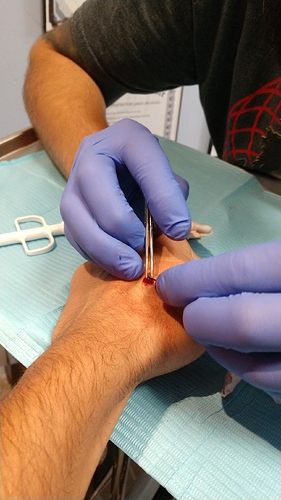 My xNT had somehow migrated towards the second metacarpal of my hand, and was pretty close to bone. First step was to make an incision through the skin. Once he had located the tag, he made several small incisions to break through the encapsulation my body had produced around the implant. That part was a bit of a struggle, and gripping the implant with tweezers is no small feat because the glass is a bit slippery. The advice on the X-Series Tag Removal page about applying pressure to the end of the tag to prop it up really helps with the incision and removal. Once everything was clear it just popped right out. 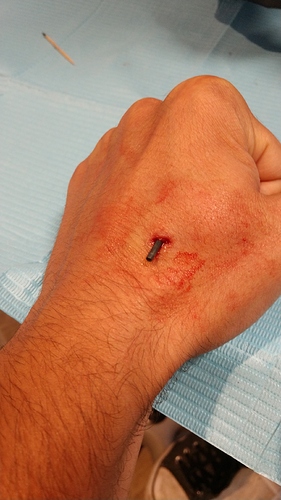 As for after care. I’m not a medical professional, but here is what I did. This is a picture from ~24hrs after removal. 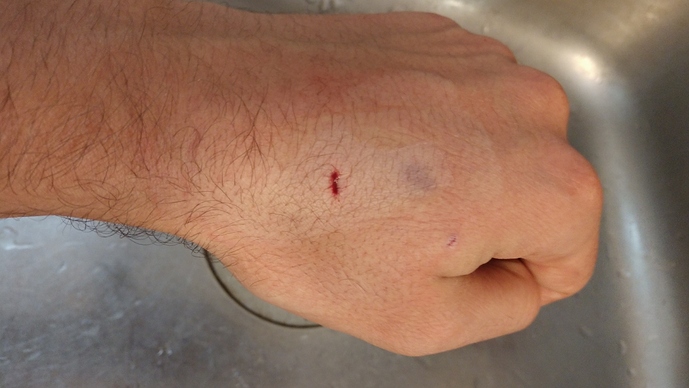 Looking pretty good. The removal incision is pretty wide/deep, but we both decided it did not warrant a stitch. Your mileage may vary. I used butterfly closures for ~72hrs (changing every ~6). 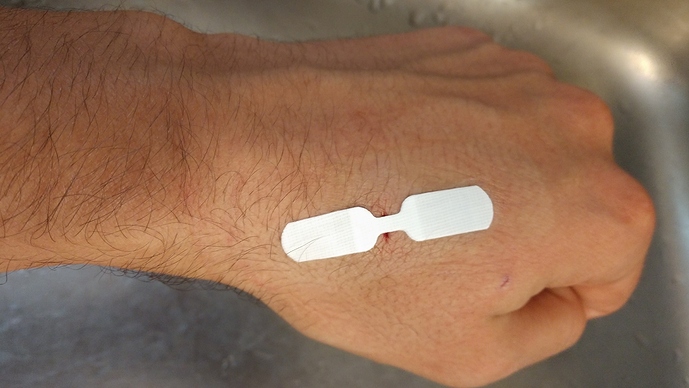 I also purchased some Tegaderm, which I cannot recommend highly enough. 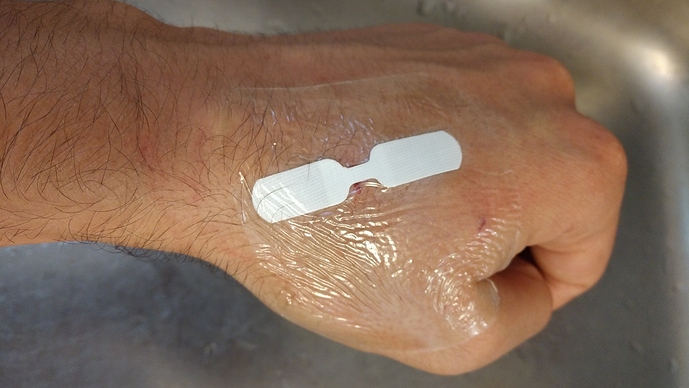 Every time I changed a bandage, I rinsed the area with cold water and patted dry with a sterile gauze pad. If you don’t properly dry the area before re-bandaging you can cause maceration, which can delay wound closure. Some people recommend triple-antibac ointment for the first day or two, especially if you’re having a hard time keeping the area clean because of a job or something. Just be wary, too much triple-antibac can also cause maceration. Don’t skimp on your after care supplies. If you’re having trouble removing a bandage because it’s stuck to the wound, wetting the area can help.

Every time I changed a bandage, I rinsed the area with cold water and patted dry with a sterile gauze pad

In my experience, if your wound is not seeping (it’s not infected or oozing bodily fluid), and your initial application was done well, then removing bandages and re-bandaging is unnecessary. When I close small project holes in my body, I have typically applied chlorhexidine to the entire area before doing any work… that’s enough to keep things chill, then I just leave the occluded bandage on for 7-10 days, or until it falls off on its own.

The idea of bandage changing is important for things that continue to ooze for any reason (infection, bleeding, etc.) or are getting wet or dirty due to environmental exposure… but ultimately when done unnecessarily, it just re-exposes the wound to possible infection. Another good reason for bandage changing though is when you are dealing with body piercings that have metal or other materials through tissue that will drastically slow healing and promote oozing.

Anyway, I just wanted to clarify the bandage change thing because I’ve seen people actually do a shit job of it after a professional has bandaged up the area, then get an infection several days after only because they were fucking with it. Sadly, many professionals, particularly in the body mod scene, still advocate for people changing their own bandaging regularly, which can be like a bomb technician handing over a live device to a rando off the street and telling them “I think you should clip some of the wires ever few days”.

Totally agreed. That’s why I purchased the Tegaderm, in the hope that I wouldn’t need to change the bandage for a week. It didn’t turn out that way this time, though. I was leaking pretty bad the for the first 12 hours, and I was still bleeding semi regularly from the removal site more than 48hrs later. It might have had to do with the amount of digging around my body mod artist had to do to get the damn thing out. I was able to handle it, though. This report was less a recommendation (because I’m not a professional) and more a damage report. I encourage anyone else with a less than ideal situation to share a report similar to this, so that those for whom things turned out less than ideal don’t feel like they’re alone. Much can be learned from failure.

xNT after removal. The glass looked a bit murkier, but otherwise in good shape: 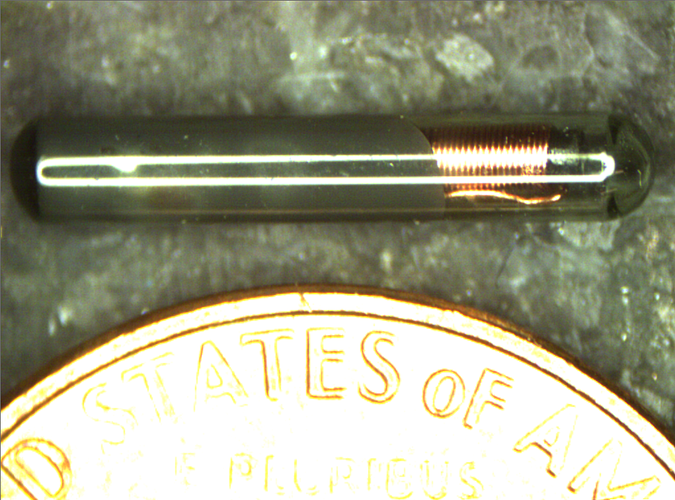 I also removed my old magnet during this visit (see my wrapped finger in the above pictures?). It was in for 10 months. 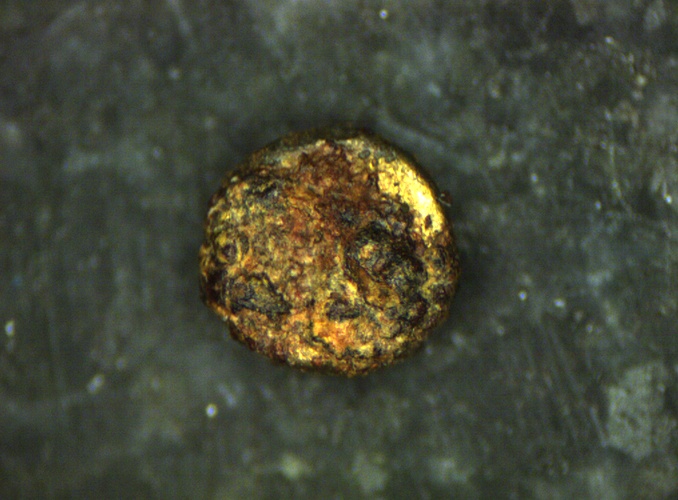 That magnet picture looks bad… like it had started to corrode.

Yuuuuuuppppp. Hence removal. I could feel it.

Sorry to bump a dead thread, but I didn’t think my question justified a new one.

Last year I internally degloved my thigh, a morel lavallee lesion. (Sp?) Basically I had a giant pouch of fluid they had to surgically excise and debridement of the wound so it would seal close against the muscle fascia, and shut. 28 staples and a JP wound drain for a month.

My question is, is there a point where you shouldn’t remove it? Has anyone had issues with a pouch of fluid like that? I assume the internal skin heals around the implant, so would that stop it from completely closing?

Nah, I’ve never encountered that before. Yours sounds much larger, though. Implant removal leaves behind a very small wound channel which seemed to close to quickly without fluid buildup, at least for me.

Maybe if you have some big fuckin experimental implant that separated a large area of your dermis from your muscle, it could become fluid filled, but I don’t know anyone in these forums doing that kind of thing.

Thanks, I was wondering when I was looking at the peg legs, as I want one.

Oh, yeah good luck with that. Cassox just made a fresh batch with the encapsulation a few days ago, and with Grindfest cancelled it’s possible he could have extras that aren’t earmarked for anyone. I don’t know what his comfort level is with sales to randos, but he has a placeholder storefront setup on the auglim site, so he might be gearing up for that eventually.

I cannot find the auglim site to save my life.

I also wouldn’t expect him to install it in a rando either.

I think by the time I get something like that, it will be significantly smaller.