Have a large, 30+ rifles gun safe,
Currently has a mechanical dial… looking to either replace or augment with a rfid opening feature

Anyone mess with “real” safes before?

Some of the larger safes come with an electronic keypad. That would provide an electronic locking mechanism. Just add RFID. You may need to trade to a different safe.

I recall a forum member doing just that with a hand gun safe. The locks are probably identical, why design two, right?

I did some modding to my harbor freight safe, apologies for the looks its jank and i am sure i could have done alot better but it works

So, due to an older post on this series of safes I decided to pull the trigger and get myself one of these guys. Bit of a hiccup though. I made a YouTube video showing the issue. All I can figure is that Hornady is using a different frequency than what is industry standard. Some additional info, My Diagnostic card works. I double checked it with my phone afterwards. I couldn’t for the life of me get a hold of Hornady to get my question answered. Even after filling out their ridiculous requirem…

This is a toolbox project of mine. Might give you some ideas.

This is really more of a hardware thing, with some of my random thoughts strewn throughout, but I wanted to present this as an idea of what an implant can be good for. Fair warning, gonna be lenghthy. My original use for an implant was to have a keyless toolbox. The project got started, then had to back burner for a bit. Let me catch you up, then I’ll show some progress. Finding a candidate tool box to modify, and picking a mechanism to install into it, was tough. Most all boxes either use a ro…

So finally got around to ripping into the guts to see what I’m working with, instead of finishing packing and strategizing for the shooting match I’m woefully underprepared for 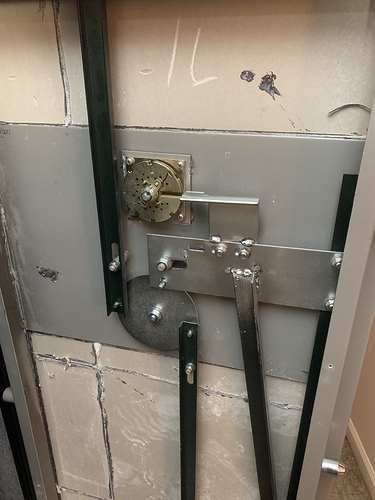 My first thought was to replace the bar with the mechanism of a rfid dead bolt, and trim the dead bolt down to fit into the lock when extended and the correct combination is dialed

Or when the rfid dead bolt is triggered, the bar retracts far enough to allow the locking bars to retract

Any other thoughts or suggestions?
I could probably more easily replace the entire combo lock with rfid only, but I’d be pretty screwed if the electronics fail, a redundant method is nice vs having to drill the safe in the event of a failure

So preface this with, I know very little about mechanics.

Would it be possible to make it so you add a breakaway for the top and bottom lock in the bar? So cut the bars, and have a piston like device that holds a rail in place, to keep the split bar from separating when opened normally when they slide toward the middle. But if you scan with rfid, it can pull the top away, and unlock it without turning the handle.

When typing this, I realized you could probably craft a face hinge that would be way more secure. It can push it away not in use, and the safe could function normal, and when it is opened, it pulls it to the opposite side, lowering the lock with it?

Again, ramblings of someone who is basic. 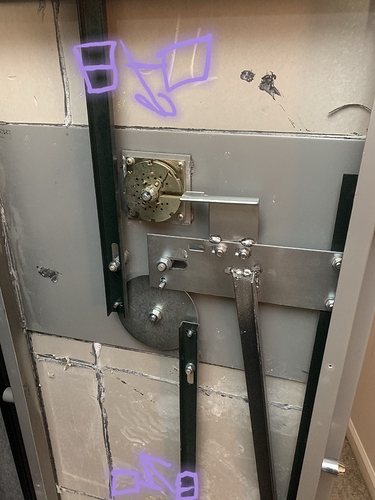 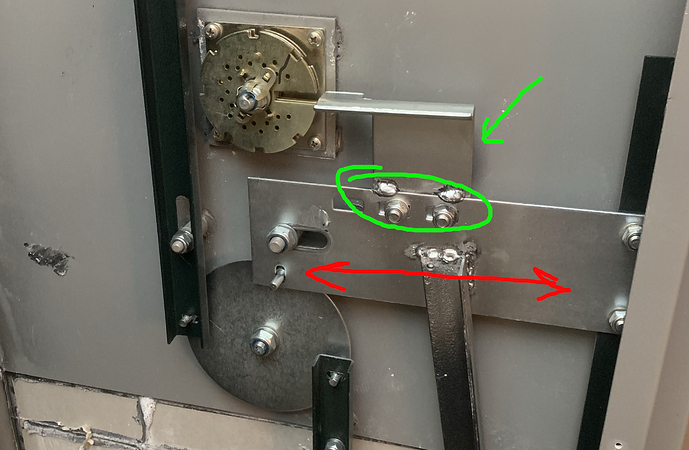 You’re going to need the plate marked with a red arrow to move back and forth, so I think the area in green and / or the plate pointed to by the green arrow is going to be where the magic happens.

All I can think of is; 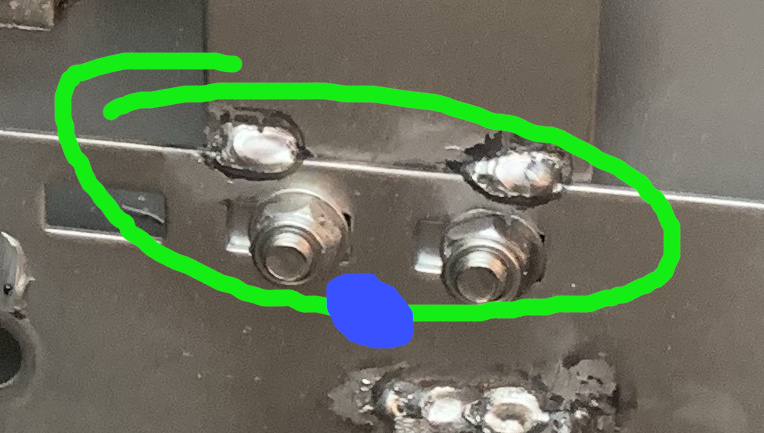 oh also… just fyi… i think that’s why the post that comes through the door to the big disc with the pins that attach to bars and the sliding plate is not toothed… it’s just friction from the nut and washer that makes that disc spin… so body weight should just overcome the friction and spin the post while the disc stays put… kind of a “its weakness is its strength” sort of thing.

There are locks on the market that are reffered to as “redundant” locks or “EMP” locks. They have both electronic or mechanical access. The idea being that if you suffer an electronic failure (or are hit by EMP in a nuclear holocaust) you can still manually open the door.

You might want to research how they build them to see if you can get any inspiration.

Yeah, been there. But… Grab the extra cash and stuff it into the “project” account. It takes money and time for most projects, grab the money while you can, and when that’s not an issue you’ll have your time back. And all the cash you saved. BINGO!

MBA USA, Inc. is a provider of locks, tools and training for locksmiths and security professionals.

I think that’ll be much easier if there is a drop in kit for your safe. Then you also know that you’re not mechanically compromising the security of the safe beyond their allowed standards.

Oh there’s absolutely nothing drop in about it

But I feel like I have a better shot at bolting in the lock portion to block the locking bar, than trying to create a custom one of a kind solonoid locking bar

Trick is,
I would love it if there was a way to connect straight to the board… but that would be a glaring security issue…

I also would like to be able to run power straight to the lock, but that also sounds like a vulnerability

I might call S&G but I feel like they won’t give me the time of day, or assume I’m trying to find a way to break into someone else’s safe

I don’t know where you live, but when I had my gunsmithing side gig in Belgium, the police regularly came around to assess the safes, safe doors and security system in my workshop. Those things had been certified and installed by a authorized installer, and I was specifically told that if any of them were modified or DIY’ed in any way, the certification was invalidated - both for the police and for the insurance company.

So my advice is, check with what you’re about to do is actually allowed.

United States,
Yea all that is non existent lol

Safe isn’t required in the first place, just don’t be a jackass
Zero certifications on safes
They aren’t even technically safes “residential security containers” is the technical term for most
Insurance doesn’t care, they just want money
The idea of people coming into your house to inspect things doesn’t sit well with American culture

Keep an eye on craigslist. You might be able to score a used safe with electronic locks in it already. Then sell yours for a profit.

Insurance companies suddenly become sticklers for rules and paperwork the moment you make a claim and it’s time to pay out. They’ll go to incredible lengths to prove that your modified safe was not in fact the same safe they agreed to insure in the contract (since you modified it), or that it became uninsurable the moment you took a screwdriver to it because you lowered its safety - which you’ll probably do, incidentally.

I’ve tangled with insurance companies, and they’re harder to get them to make good on their promises than hiring a nun for a game of strip-poker.

“ because you lowered its safety - which you’ll probably do, incidentally.”

Like I said there is no regulation or certification or requirement on safes in regards to personal application,

If something is stolen insurance pays, they can’t deny for something they can’t require,
They just charge for coverage

Europe and United States have very different culture in regards to physical security, supposedly due to historical differences in regards to occupation or lack there of,
As a result most gun safes are crap in the United States, there’s interesting history and reasoning for this but that’s a different conversation

Have a plan, slowly moving forward

Found a nice digital lock that I’m going to replace the entire mechanical craptacular lock with
Lock has an emergency back up key, which is good, but is also the weakest link usually, so this will get obscured and possibly tamper sealed
(Because it’s likely every person with that lock has the same key… look up keyed alike for lulz)

Then I’ll wire the solenoid parallel with the xem v2
Remove the actual digital keypad, and replace with a 3D printed rfid front face

So I’ll have 2 backups really
Primary, rfid entry
Secondary, locate and reattach digital keypad
Tertiary, remove keyway shield and insert key
(Not sure how I’ll block the keyway yet, likely a false placard or something, but I’ll make it super fiddly, so that even I have to spend 20 minutes or so if I want to use the key)

Remember, it’s all about time
Give me 24 hours privacy, and a stack of Dremel discs and I can cut even a really nice gun safe open like a work of art

Not sure how I’ll block the keyway yet

Can you up-rate / harden the lock barrel or even just put in security pins?
What sort of lock is it?