the only thing that seems to kill them is a direct hit on the tiny chip… dislodges it from the flip pads… but, once encapsulated in biopoly (and under your tissue), it will have more than a fighting chance at keeping alive long term. Of course, anything is possible, but I’d be surprised if it became an issue.

Would a piece of stiff(ish) plastic above and below the chip protect it some more? You know, just so that area is stiffer.

Also, would it be better to implant the thing so the chip is directly above a bone, or above soft tissue?

Would a piece of stiff(ish) plastic above and below the chip protect it some more? You know, just so that area is stiffer.

yeah the biopoly serves this purpose pretty well as it molds around the z-height of the chip. Otherwise if you put bits of rigid plastic on either side, it becomes like a ball bearing between two rigid discs and ends up being the fulcrum for those plates, ultimately taking more force from a greater surface area of impact probability… basically it would make it worse… but you see my point… the biopoly works to help the situation but I would not want to add additional materials that would essentially remain rigid. … though it might make sense to put a protective ring around maybe? I’ll see if I can find something.

Also, would it be better to implant the thing so the chip is directly above a bone, or above soft tissue?

Hmm… I would say… probably irrelevant in this case. I’d say it’s more important to ensure it’s comfortable. The only reason I say this is that the tissue above the chip will be more important than the tissue under it. Unless you are getting stabbed with a flatblade screwdriver right on the chip, I think it won’t matter what’s under it so much.

PS, i have had a flexNT in my left middle finger directly over the second metacarpal… it also uses a flipchip’d NTAG216 and it’s survived plenty, including punches to the body bag and probably a couple harder surfaces.

Unless you are getting stabbed with a flatblade screwdriver right on the chip, I think it won’t matter what’s under it so much.

I’m only concerned because I often work in my workshop, and I can’t count the number of hard blows I’ve sustained to my hands and (to a lesser degree) arms with machinery. I try to be careful, and most of the time nothing happens. But when it does, it really does.

PS, i have had a flexNT in my left middle finger directly over the second metacarpal… it also uses a flipchip’d NTAG216 and it’s survived plenty, including punches to the body bag and probably a couple harder surfaces.

Speaking of which, I asked you that in another thread: would implanting my FlexM1 there be an option? It’s tempting, but it looks less flat and less flexible than a FlexNT in the short dimension to be able to “wrap” around the finger.

Speaking of which, I asked you that in another thread: would implanting my FlexM1 there be an option? It’s tempting, but it looks less flat and less flexible than a FlexNT in the short dimension to be able to “wrap” around the finger.

It would only fit in the longest of fingers… the flexNT barely fits in mine and you definitely don’t want to go over the knuckle. The flexMT antenna wouldn’t mind but you might have complications with the knuckle. Finger surgery is very tricky… that’s why general surgeons refer you to a hand surgeon for stuff like this. One wrong move with a scalpel and you could lose all feeling in your finger, sever a tendon, or lose your finger all together.

Yeah okay. I thought so. My middle finger is okay for length, but again… it’s too often too close to machinery. And yes, it’s dangerous to cut stuff open there - I know that from experience.

but after all the messing around with following the shapes etc i think the best approach for me to do this is to simply cut a single circle out of the center… i was able to make a little “map” of the interior, but then my expectation of simply being able to reduce size to cut the biopoly in the same shape was a bit dashed… angles didn’t line up and so it was a serious pain to try to re-map the smaller cut lines… so anyway… how about a 15mm diameter slightly offset circle cutout?

I just “simulated” punching several overlapping holes with standard round punches. Here for instance, one 15mm punch hole smack at the center, one off to the left and down, and 2 smaller partial cutouts with a 6mm punch to the right and up: 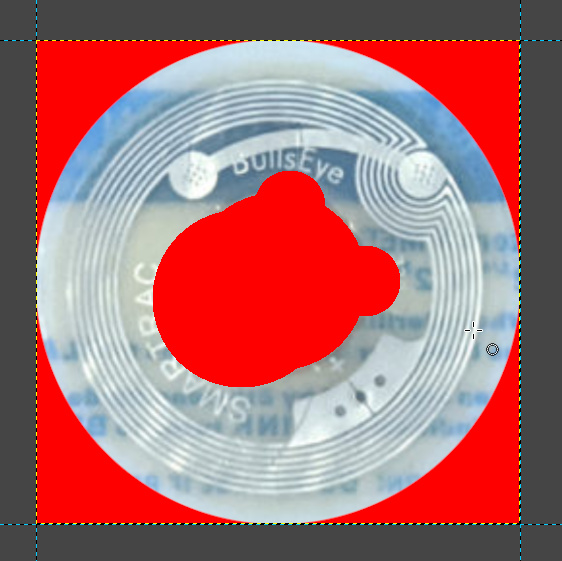 Or I suppose you could also use an even smaller punch and follow the shape around inside to create a custom cutout with a standard tool.

Wouldn’t that work? Why make a custom-routed punch?

all I can think of are these 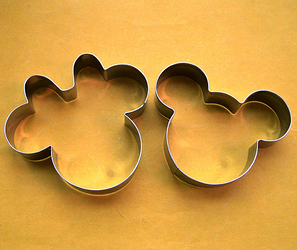 Okay, let me do some more photoshopping tomorrow to picture what I’m really looking at getting, and to trial-position a paper cutout here and there, to see where it will best implanted, then I’ll place my order.

So I made my FauxNext out of paper with a dozen layers of clear tape over it to simulate the stiffness of a Flex device.

I tried it on the back of my hand: it’ll work, and it doesn’t even feel that awkward at all. But the positioning needs to be surprisingly precise: too far forward and it’ll bend with the knuckles. Too far backwards and it’ll bend with the wrist. And since it’s already slightly bend left-to-right due to the curvature of the back of the hand, it’s not going to end well if it gets bent in the other direction. Also, I feel it should be contained entirely within the space of the metacarpals - i.e. no overhang on the blade or on the thenar area: 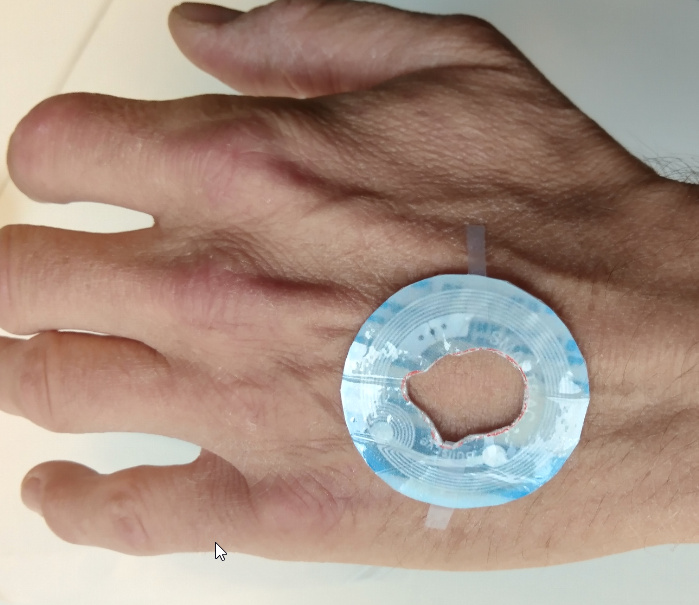 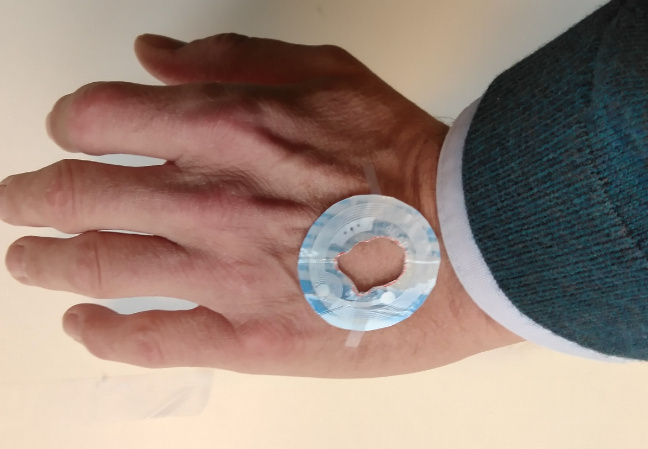 I tried it on my forearm too: it’d work, but good thing I don’t wear a watch

Also, again, it can’t be too close to the wrist to avoid bending in both directions: 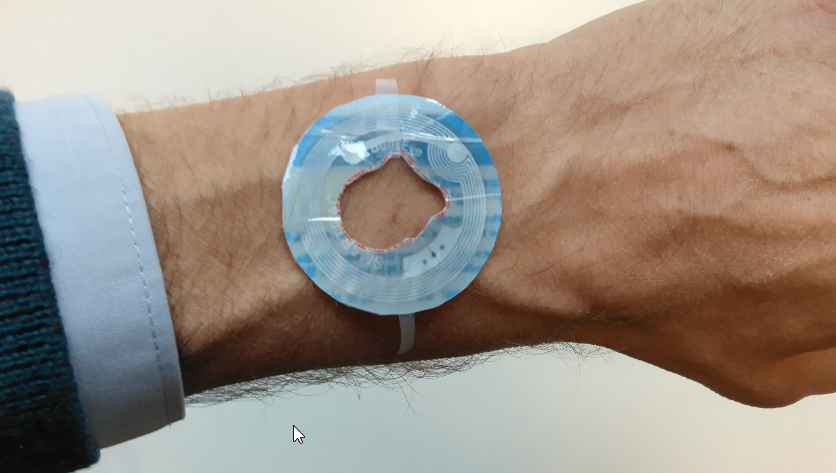 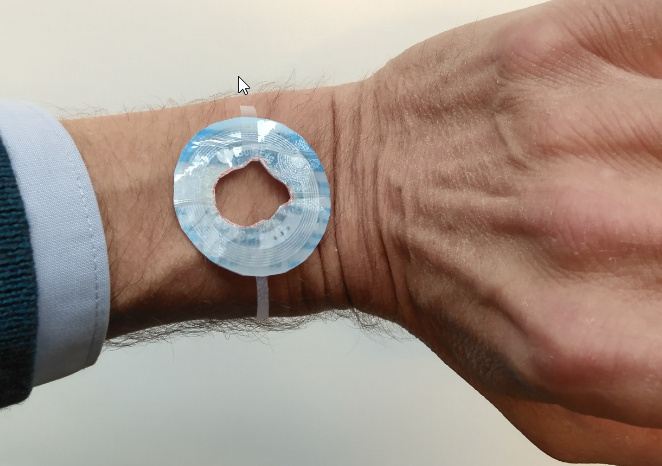 I think the major problem with the back-of-the-hand placement is the risk of collision with something. For the wrist, the risk seems to be that it’s extremely easy to crumple. Hmm…

I’m gonna ponder some more, but I think I’ll end up pulling the ole credit card…

The flexNExT is now in limited release! Product Announcements

Yes I did try the forehead: it’s not working out all that well actually. The problem is, you’re trying to paste a flat, somewhat stiff disk onto a sphere. It doesn’t want to and it actually creates wrinkles if you insist. Definitely not good.

There is one perfect location for that implant: the temple. it’s truly flat, the skin is reasonably taut, it’s not soft underneath (well, for most people anyway…) The problems with that location are:

And no, you ain’t getting a photo of my ugly mush

I actually cut the inside with punches (I didn’t have 15mm, but I made do with 4 to 10). But I forgot to do it the way you would - that is, first hollow out the naked tag as close to the traces as possible, then “bio-coat” it with packing tape, then hollow out the tape leaving a 2 or 3 mm safety rim. I had already put the tape on the paper disk before I realized I should have tried that for accuracy.

I’ll try it tomorrow. But it looks perfectly doable, provided the backing for the punches has zero give, to avoid deforming the tag when hammering the punch through.

do you really want to tell people to bring their cellphone to your head to share whatever information is on the chip?

omg that would be the most amazing fucking magic trick ever!

I will now telepathically push my contact details to your phone…

Hmm… Interesting, I didn’t consider that. It has a strange sort of appeal actually

Still, I don’t want to bang my head on the table to log into my computer…

I know at least 2 coders who do that willingly

Well, there’s something about that implant that puts me off. The aluminum foil thing probably, too much detached skin despite the cutout, too close to the joints. Sorry, I’ve had a long hard think and… I dunno, there’s something that doesn’t sit well with me.

So I tried something else. Amal, would you be able to make a FlexMT without the LF chip, possibly with a NTAG 21x chip instead of a M1k, and possibly with a blinky over the chip if it doesn’t kill performances like you said it does with the Bullseye? 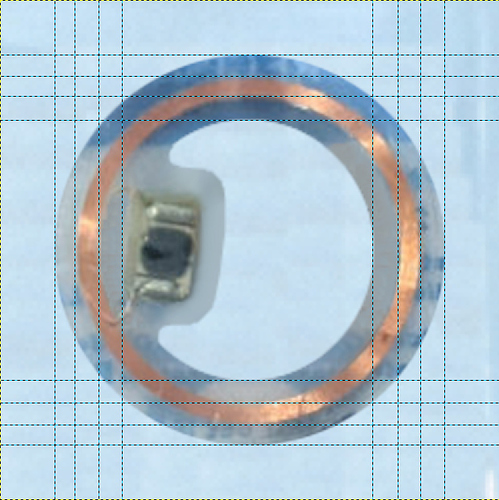 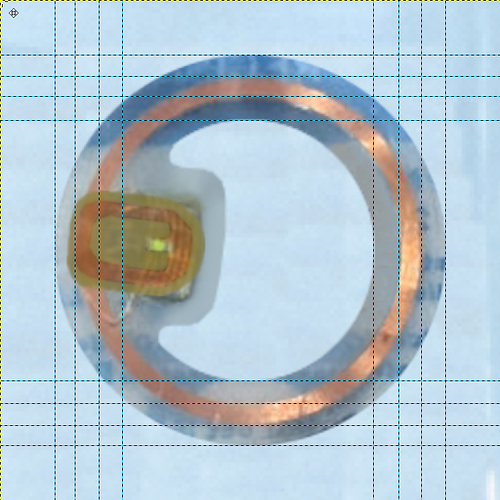 That would be a 33mm diameter implant with a 14mm x 14mm area of detached skin at the worst point - above the chip - and only 6mm over the rest of the coil. It would be much more reasonable than the 41mm bullseye with the smaller center cutout.

Also, I made a FauxMT and tried it for fit: It works a lot better on the back of the hand and on the wrist, and easily stays clear of any joints: 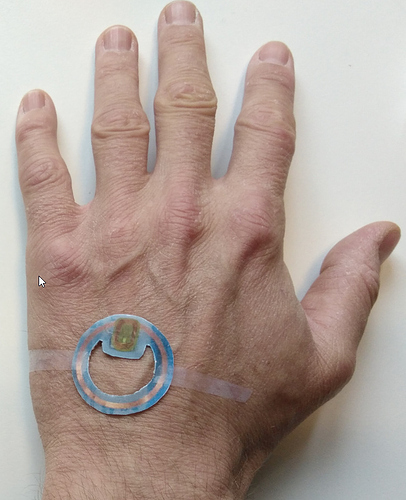 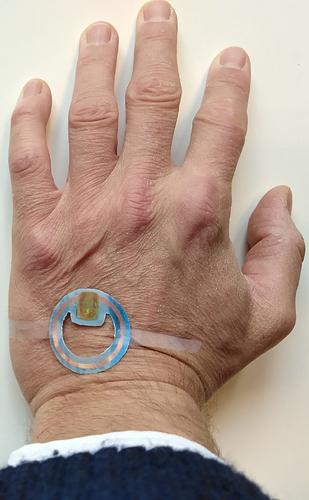 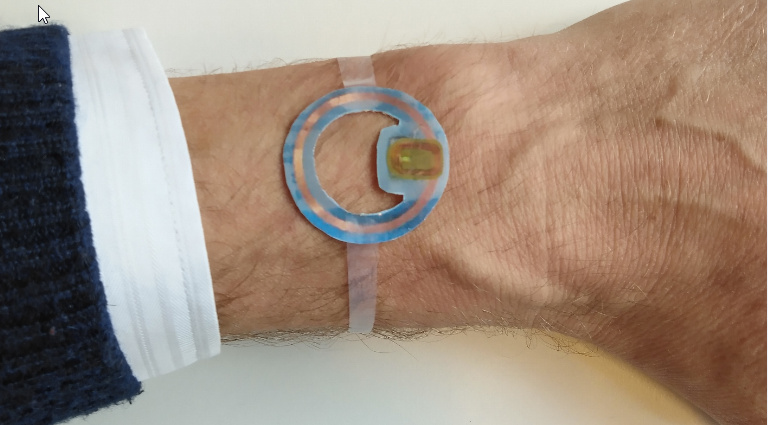 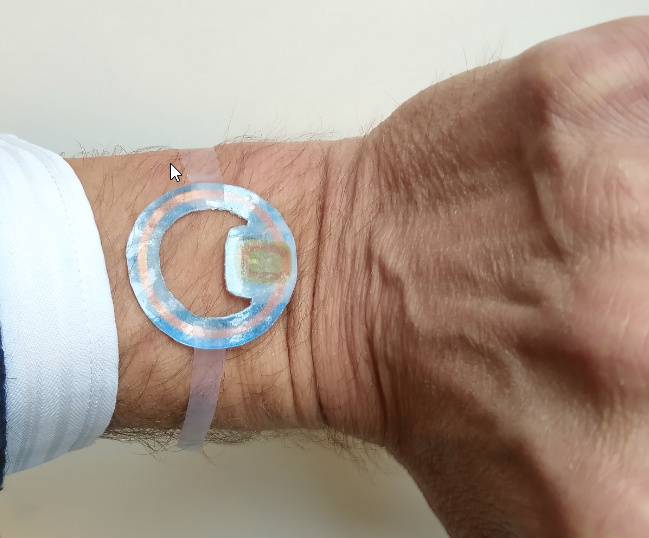 So, doable you reckon?

The blinky can’t go over the chip. These chips are typical chinese COB package with a full metal backing which totally kills the led nail thing. I could make a custom flexMT with no blinky, no LF chip, and a center cutout though.

Okay I thought so. Doesn’t kill to ask though.
NTAG instead of M1k possible?

Not likely… the antenna is totally tuned differently for these chinese magic chips and would not be possible to just swap out… if you found an ntag attached to a wire wound antenna like this is be happy to try working with it.