I thought this writeup might help some folks considering converting their motorcycle ignition switch to RFID control using the DT access controller.
There are several different ways this has been done (search the forum), here is one method that was pretty simple for my Victory. In fact, I believe this same (or very similar) method was mentioned in this thread:

Figure A shows a simplified version of how the bike was originally wired. The ignition switch had two contacts, the first key position energized both circuits, the second energized only the auxiliary circuit (4-ways, horn, etc). I never used the second position, so I deleted it (this can be maintained with a little creativity). The fuel pump relay and rest of the ignition components not seen here are downstream of the kill switch.

The idea was to eliminate any additional switches, simplify wiring, and keep things safe, while minimizing the current draw of the DTAC (Dangerous Things Access Controller) when the bike is not in use.

In essence, I used the right handlebar kill switch to energize the DTAC, which in turn (upon successful RFID tag scan) would energize a latching circuit to power the various circuits downstream of the deleted ignition switch. The kill switch is also used to de-energize the latched circuit, thereby turning off the bike. With this setup, the only additional load passing through that kill switch is the power for the DTAC (48mA max) and the coils of two standard 4-pin automotive relays.

Diodes were used to protect the DTAC output from the latched circuit and to direct the current flow so the only load seen by the DTAC is the coil of relay CR1.

The application of this setup depends largely on how your motorcycle is wired, but the concept can still be utilized if tuned to your circuitry. I hope it helps! 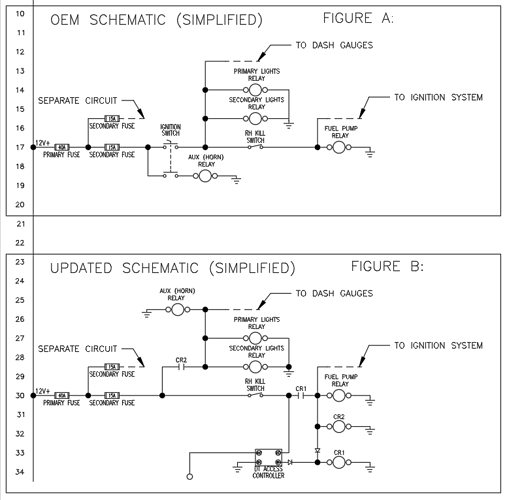 Thanks for this. I don’t have a bike (cause everybody tried to run me over), but I’m a huge fan of documenting projects for the next guy.

It’s even harder when you don’t have a motor aside from your own meatbag ass.

I used to enjoy doing that for my car forums when I was on there. Makes me miss having a car to mod.