I just purchased a SureSense Reader to compare it with my Halo Scanner. Both are affordable 134kHz FDX-B readers that support the temperature field in Destron Fearing Bio-Thermo chips - aka the xBT in DangerousThings parlance. Just to be clear, there are other readers that read Bio-Thermo chips - including Destron Fearing’s own Global Pocket Reader Plus GPR+ scanner but these devices are insanely expensive - as in rip-off sort of expensive, considering what they do.

This is going to be a quick review, because… well, it’s a very simple device. First of all, here’s a picture of the thing: 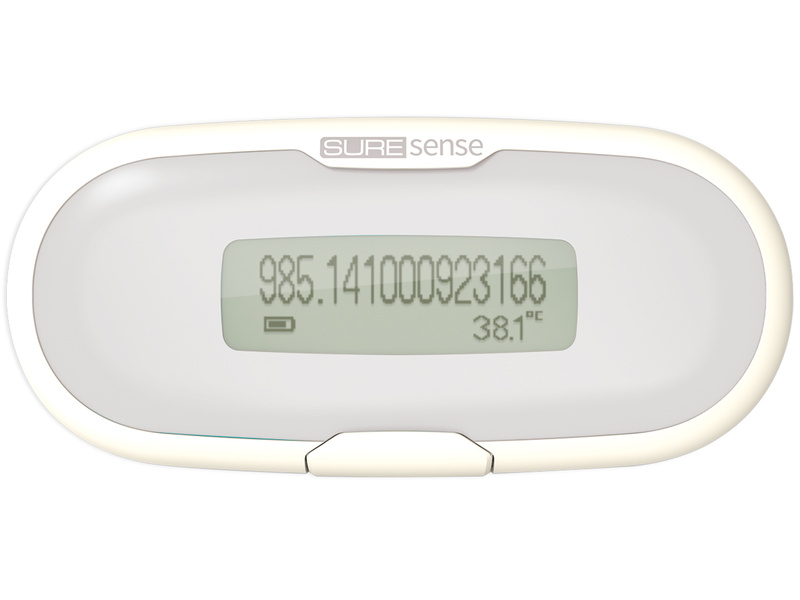 So, how does it work? Simple: plop 2 AA batteries in it, press the button, put it close to a chip, and voila: it displays the chip’s UID, and the temperature obviously if it’s a Bio-Thermo chip. It’ll turn itself off after a few seconds. You can’t long-press the button to do so.

When you next power it up, it’ll displays the last chip it read, in case you failed to write down the UID before it went off. If you want to take another reading, press the button again. That’s it: it’s so simple a dog could scan itself.

What’s less simple is changing the temperature unit (F or C). To do that, you have to pull the batteries out and reinstall them while pressing the button. How cheesy is that? Never heard of long press buttons SureSense? But well, it does the trick.

How does it compare to the Halo Scanner?

Now the bad bit: the device’s readings are off compared to the Halo Scanner, and I suspect the Halo Scanner is the one that’s correct. With the code below (read on), I pulled several measurements at different temperatures, and obviously the device applies some kind of correction the Halo Scanner doesn’t apply. For instance, here are a list of raw values from the reading log and the temperatures displayed on the screen:

It looks like the temperature is VAL / 10 + 24.6 in Celsius, but then the series break at 35.8C - meaning the device applies a correction, and you’ll never see 35.9C displayed on the SureSense’s screen. Weird… Also, that 24.6C constant corresponds to nothing documented and is weird also.

But hey, we’re talking tenths of degrees here. Nothing serious

Now then, for the exploit:

The SureSense reader comes with a USB cable. The manual says it’s only used for updating the firmware, but I plugged it to my computer anyway. When I did, the device showed a computer icon on the screen and didn’t respond to the button anymore. But the computer saw it as a USB mass storage device, containing a READINGS.CSV file, which is a log of the readings the device has taken since the last reset.

So, at first sight, no way to use it as a USB scanner.

But but… There’s a bug in the firmware: if you press the button to trigger a read, then connect the USB cable after the doggy icon appears and wait a bit, the device returns to the regular standalone screen display with the display full of XXXXXs, it lets you scan stuff, AND the computer sees it as a USB device at the same time!

Now, sadly you can’t just tail the CSV log file and expect to see new readings get concatenated at the end of the file as they’re being taken. But if you unmount the drive and remount it - without unplugging the device - you get the updated log file.

So, with that exploit, it’s quite easy - if inelegant - to turn your SureSense Reader into a USB chip scanner for your computer. In fact, I just threw together a quick Python script to do exactly that. It runs on Linux, it needs to run as root, and it doesn’t check errors or anything. But it’s just a proof of concept. Here it is:

Note that if you unplug the device without unmounting it, the firmware will be left all weirded out and it will report a hardware error to the USB mass storage driver when you plug it back in. If that happens, simply reset the device by pulling/reinstalling a battery. In fact, sometimes it does that even if you unmount the device. Oh well, after all it wasn’t meant to work like that. Small wonder that it works at all really

@anon3825968 fuck yeah! Love that you hacked the shit out of a cost effective device like that! Deffinetly gonna order one this morning. Are you gonna toss this up on GitHub at all
This could be a cool project, I like playing with displays. My pwnagotchi display is one of a kind

Nice clean python script. And it’s written in python3, instead of 2, thank you

Mechanics of it look clean and efficient.

Wow, I had not heard of pwnagotchi before thats kinda wild.

As for that CSV file does it have the UIDs as well as the tempature readings? @anon3825968

Nice clean python script. And it’s written in python3, instead of 2, thank you

Python2 is getting very long in the tooth. Anybody who uses it for anything other than maintaining existing code should be shot through the head. And Python3 is so much better for so many things - i18n being one.

Are you gonna toss this up on GitHub

I won’t. Believe it or not, computers bore me to shit. I’ve had my fun exploiting the thing for an hour, now I’ll move on to something more interesting that doesn’t involve computers.

As for that CSV file does it have the UIDs as well as the tempature readings?

It does, but I can’t work out the encoding. It’s probably mixed with other bits from the FDX datagram, and possibly with stuff from the reader itself. Anyway, the encoding is non-trivial - as in, it takes more than 5 minutes converting a few hex value to dec - so I got bored and I left it at that

Who’s gonna open it and let us see what’s inside, if it can be hacked… like empty soldering points for extra connectors like USB, or to add a power button…

I suppose I could have a look.

Actually I should also have a look at the Halo Scanner: I seem to remember reading about people interfacing it with Arduinos or RaspPis, but I can’t find the pages I read that from for the life of me. I assume the Halo Scanner must then be reasonably easy to hack if that’s the case.

I should also have a look at the Halo Scanner

Could probably find those databases you were looking for on there, too.

Link to where you purchased from? Wasn’t coming across one right off…

I got it from Kivuton, a Finnish web store for pet supplies:

Damn…well I just started a job at a vet hospital so maybe someone there can help me out! Thanks

Worst case you could possibly just decode the signal to the display.

I revisited my script in light of my recent Bio-Thermo findings, and reverse-engineered the complete format of the SureSense reader’s log entries. Now it correctly reports the FDX national code, country code and temperature in case of Destron Fearing Bio-Thermo / xBT chips, and also correctly detect no-read and invalid-read events. And since I was at it, I commented the code a bit more.

You could use a Halo

Or a Flipper Zero