Does anyone know what tech is used in motorcycle keys for immobilisers?

Probably the same that’s used for car immobilizers? From my understanding, most are rather proprietary.

Probably not RFID, then?

Some keys have transponders so some form of RFID. Others (older styles) contain resistors the resistance is measured when the key is inserted and if it doesn’t match the known value the key doesn’t work.

Common automotive transponders are 125khz and employ some crap form of challenge response. One of the most popular types is from Texas Instruments and employs a 40-bit challenge response mechanism. It’s not enough to actually secure it, but it is enough to frustrate the idea oh cloning it to a common implantable chip type like the t5577

Thanks for your answers. I’ll ditch the idea of cloning my key.

Thats not to say there aren’t other options to achieve what you want.

I just finished my Keyless Ignition and fuelpump security setup on my Indian Scout Bobber Motorcycle. I had some problems with the MO-Lock and my NExT RFID + NFC Chip Implant, i wasn’t able to turn on the MO-Lock, turning it off was not an issue. I cloned a EM4100 transponder to my implant with the Proxmark 3 and the ProxLF antenna for the Proxmark3 RDV4, it works perfect with a pretty decent reader distance

Thanks @Pilgrimsmaster for your hint

I made a small vid…

@Pilgrimsmaster I have recieved my Proxmark 3 and the LF antenna, compiled and installed the Iceman repo. Did an Em410x clone from a Chinese Em4100 transponder to my implant, and can now confirm the motor gadget is working 100% - happy me

Thanks for your hint

Hey all. I’ve got 3 months off of work and strugling to keep myself occupied. In this time I’ve decided to modify my Motorbike. Ive planned to for a while and now I finally have the time. One modification will be key less ignition using my RFID chip I have a drz400e and have spent some time on here reading other posts etc. Just trying to get opinions on what everyone considers the best method. I also need to ensure that the entire system is waterproof as I do like to get in the mud

Boys and girls, turkeys and squirrels, and everyone else I forgot… If I can get some time this weekend at home I plan on wiring up my xEM controller to the ignition on my Harley. Only thing I am not understanding is… If the controller acts as a trigger, what keeps the circuit complete to let it keep running after you pull your hand away from the antenna?

Thought I’d share my first project. Very rough I know, but its just a prototype. Switching a relay with 5 second reset using arduino pro mini and my NExT. I didn’t write the code myself, just modified some I found online. Probably cost under ten pounds in parts. I’m pleased with how well it works.

Yep. My car key uses the id48 chip, and while it might technically be possible to clone to a t55xx, it’s not realistic. I’ve been working on cloning that chip for a while now, but haven’t gotten super far. One thing that one could try us to buy a id48 emulator chip, but I haven’t found any source for those at a good price.

On a motorcycle it might be possible to use the m-Lock … reads the xEM / NExT in EM mode.

The other question is - are you sure your key has a transponder in it? So many bikes tend to have hotwire protection built in to the lock cylinder as a sort of hidden resistance on the line that the ECU looks for… and if you short / hotwire, it’s missing and that disables the engine start. That’s what my 'busa had in it… but it has been a while… perhaps bikes are catching up to cars and putting transponders in keys now?

The other question is - are you sure your key has a transponder in it?

It might of course be smoke and mirrors, but my previous bike, a Hornet from 2010, had the famous Honda HISS system, definitly with a chip. That’s 11 years ago.

Thanks for the links. It is the immobilizer part that is troublesome for me. I know I can purchace a so called Rexxer unit to reprogram the on board computer to not consider the IMU, but that costs an arm. What is the unit you posted a picture about? Don’t find it mentioned in any of the links.

What is the unit you posted a picture about?

That is a transponder bypass.
Basically it does exactly what it says on the tin.
you put your key (or chip) in that, and when it is powered the ignition “sees” the transponder, and will allow the vehicle to start. 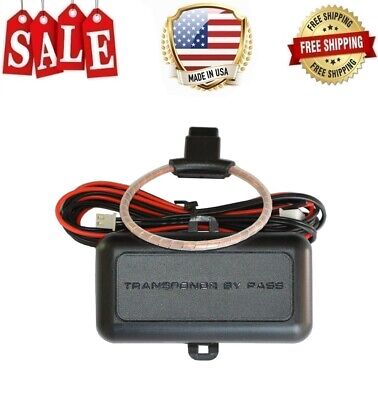 Simple two-wire connection for super easy installation. a spare key with chip is required to go inside the box, if the key is bigger than the box, need to take out the PCB of key to the box, then pu; 2.

Let me know if you need further explanation…

Wow, that’s amazing! Never heard of such a product. That will probably solve my issue. Thanks a bunch!

Well, it will depend

It’s not going to help if this is your setup

resistance is measured when the key is inserted and if it doesn’t match the known value the key doesn’t work.

But if its just the transponder, then you should be onto a winner

Thanks, I’m aware. I am however 99% sure it’s a transponder.