So I just had an idea…I bought micro LEDs with NFC pads on them without realizing they don’t support data storage. So I then also bought some with data storage…but I was curious if you’re able to “stack” tags on top of each other and still get a read.

I know NFC doesn’t work through metal but would one loop be enough metal to block the signal from passing through it? Then you could put like a HF and an LF tag “on top of” each other in the same implant location. Then depending on what your reader is set to you’d get a different reading.

kinda… that’s basically what we’re doing with the flexNExT and flexMT… but magnetic fields are tricky… best results usually come from playing around and feeling it out.

Ohh ok I see. I had assumed they were concentric, one “inside of” the other.

My tags finally came in the mail

super stoked. Found out if I stack them like this, LED then data on top of half of it, the LED still gets enough power to shine brightly and the data tag can be read. Putting the LED on top blocked the data tag. Just in case anyone sees this and wants to replicate it 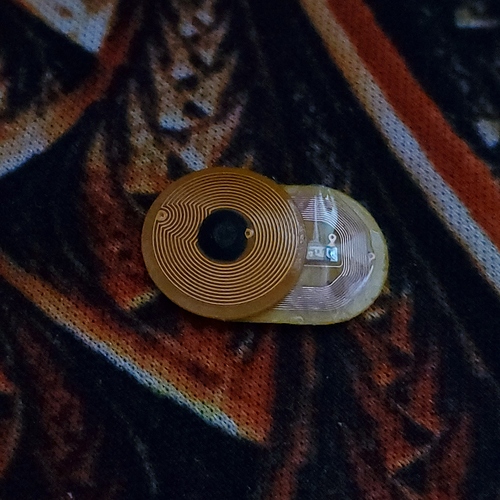 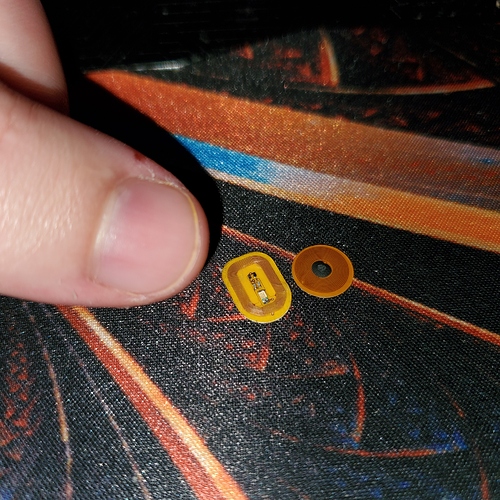 So one more thing after some more research. My phone (Galaxy Note 10+) only polls at low power until it senses a draw then goes full power. This causes the LED on its own to flash at various brightnesses. If I put the data tag halfway over the led tag it blocks enough of the LED coil to keep the LED from going to full brightness sustained.

If you have the two tags right next to each other, the phone goes to full power, sending the data tag, which causes the LED to remain on at full power (actually very bright relatively) until the phone is removed…very interesting, to me at least.
Also the intergrated sticky tape on the pads has actually been strong enough to be applied and reapplied from my nails to my hand and fingertips on several places and even while typing has remained in this spot for hours on my hand. Very promising 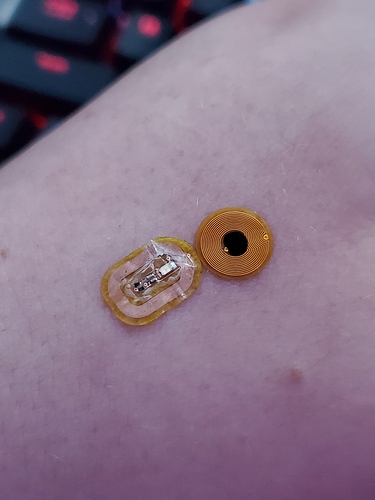 Interesting… where did you get the circle tags, and what chip are they?

I also got them on Pimoroni:

Unlock your computer, trigger tasks on your phone, or make scannable works of art! These teeny-tiny little NFC data stickers add a whole layer of interactivity to your projects.

Those are just begging to be turned into implants!

Yeah but the question is how would you do it? The coils have to run perpendicular to the reader so you couldn’t like, roll it up and stick it in a capsule. You’d have to do surgery

and that makes me concerned

Yeah, but whoever buys one knows it. It’s not like DT doesn’t sell implants that require scalpel work.

That tiny thing makes you concerned have to seen the flexMT or the FlexNExT. 33mm and 41mm respectively.

I can withstand pain okay, but I’ll be implanting a FlexM1, a FlexEM and a FlexNExT in one fell swoop in September. That’ll be something

The coils have to run perpendicular to the reader so you couldn’t like, roll it up and stick it in a capsule.

The coils do not need to run perpendicular to the reader when they are flat plane spirals… that is only required of cylindrical wound coils like what’s inside the glass tubes. These will perform flat to flat as they have been designed to do.

That tiny thing makes you concerned have to seen the flexMT or the FlexNExT. 33mm and 41mm respectively.

The performance is still going to be vastly different due to the size difference though. For example, you will definitely not be able to read this through the hand with an ACR122U.

Those are just begging to be turned into implants!

I’m going to get some to tinker with. If they are small enough to be encapsulated and fit into an incision made by our 4G needle, then it might be viable. I don’t think the round shape will make it easy though… the flex’s wedge shape is what makes it easy to insert into the needle incision, and this will be like trying to stuff a whole round pie into your crescent shaped pie hole…

… possible, but not pretty.

I was getting really inconsistent/bad reads not having them perfectly flat, but they were registering from an inch or 2 away which I thought was cool, assumed cause they’re so small they’d have to be right up against the reader.

One thing I will also say if you like these but don’t want to do the insert, I’ve STILL got the LED stuck to the same spot on my hand and it still works. I got a full night’s sleep with it on using its supplied intergrated sticky pad. I think that’s pretty cool. Sadly the data tag didn’t last and after it fell off overnight it wouldn’t stick to anything anymore.

These will perform flat to flat as they have been designed to do.

If I may ask what do you even plan to do with those? My family keep asking one great question of me lol
“Ok so if you get the implant…then what? It’s a lot of money and risk just to be able to load a YouTube video or a document or photo”
And I just don’t have a consistent good answer lol.

If I may ask what do you even plan to do with those?

I should leave that for @anon3825968 to answer, but what he plans on installing is just Flex versions of other implants, so he will be getting, increased range and performance to use them with what most people use them for , plus I imagine, some special @anon3825968 projects…Seriously, just read through some of Roscos posts, he has created and test many ingenious integrations of implants meet [insert thing here]

My family keep asking one great question of me lol
“Ok so if you get the implant…then what?

Actually an understandable question, but not hard to answer, if I had more time today I would start listing things for you.
Any implant is FAR MORE capable than a Rick Rolling prank gimmick, just look through these forums.
The limitations are more at the user end.

Even something that you would see and just think, why don’t you just use a key? 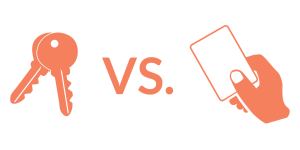 Or something you see and think, “what’s the point?”
“Why did you waste your time?”
or even just, “think why???”
another “simple” example.
@ODaily magic tool box… just use a key!!!
with the exception of above about keys.
How about the many learnings and experiences he got from making the project, that has transferable skills, that he and others (because he shared his journey) can learn from, including, lessons learnt, what to do next time.
That one project, spun another project, very similar with a different twist on another tool box.
The same info was used in “unrelated” projects, with garage doors etc.

Any way out of time… but The Apex is just around the corner and there is a whole bunch of OTHER capabilities, check out the Vivokey site for some more answers there, plus I imagine there will be more people answering you below my post here.

For me, implants are all about functionality. So maybe I can tell you what I do with the implants I currently have, and what I plan on doing with the ones I’ll implant in two months, so you have a few use cases to argue your own case:

As for the 3 upcoming implants I don’t have yet:

Finally - and that’s important for me - the implants let me explore new ideas to interface with electronics and give me a good excuse to hack things around, which I love doing.

Crucially, I still look like a perfectly normal and sane individual, and what I do doesn’t offend or annoy anybody. So ultimately, after I’m done explaining how my implants are useful to me and bring me fun, if someone still doesn’t see the point, what I choose to put under my skin with my own money to do what I want is my own affair.

I hope the above will give you a few arguments to discuss with your family.

plus I imagine, some special @rosco projects…

See what I mean?