During a discussion on another thread in this forum, it became clear that a naming convention of some sort should be made for the implant locations in the hand:

Impatience consumed me. As expected Lounge

yeah… it’s not the knife edge… there’s no word for it really… knife edge would be yeah the actual side of the hand… i just say “just outside the pinky metacarpal” … but there’s no word yet to describe this spot… let’s name the spots… i’m a fan of zero base arrays and it kinda fits with the finger thumb theme… so; [hand-positions] If you are talking about the left hand knife edge, you would say L5… kinda like how dentists talk about teeth in your head… I have a flexNT at L8. I figure fingerti…

I simply modeled the way dentists talk about teeth in the mouth, and concluded the following should suffice…

First, a prefix of L or R for Left or Right. Next, a number to specify the position. 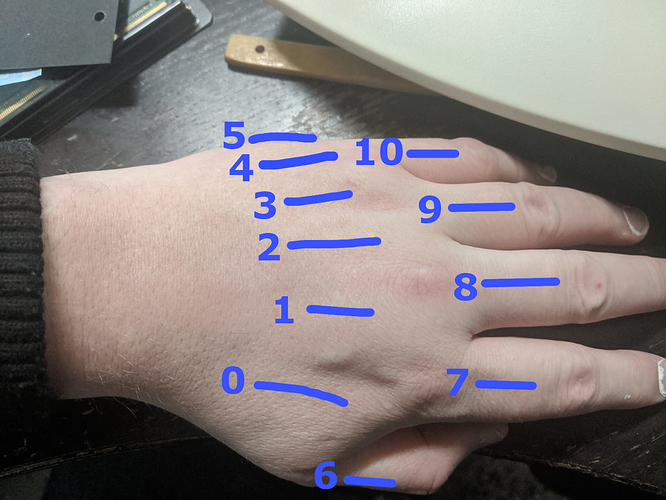 More positions may be added to this list in time. Fingertips should be fairly self-explanatory (I have a magnet in my left middle fingertip).

*These positions are mostly listed for consistency, but they are very uncommon implant locations due to their relatively small size and are typically not suited for implantation for that reason.

13 Likes
How do 2 separate implants get installed in one hand
Complete diagram of glass implant locations?
M1flex installation with Apex needle
Two RFID Questions: Placement and Interference
Need help noob (fake magic)
Clarity on Implants
Migrating xNT - possibly wrong installation?
Getting started, I need help
Putting both xEM and xNT in one hand
Taking the plunge
Biomagnet pain managment with Numbing Gel
Multiple Flexes
Postage and Tacking for order
Impatience consumed me. As expected
Implant Sutra - An index of implant positions that have been discussed and/or tried
Information on this location
Yet another advice on my chosen implant location thread
WIKI - BEGINNERS GUIDE to implants & becoming a cyborg :robot:
Password protection on fresh implants
XSIID LED not visible
Migration concern
Question about NExT placement
Probably self injected into muscle. How hard is the removal?